KAICIID, Partners Commit to Unprecedented and Sustained Dialogue in Education 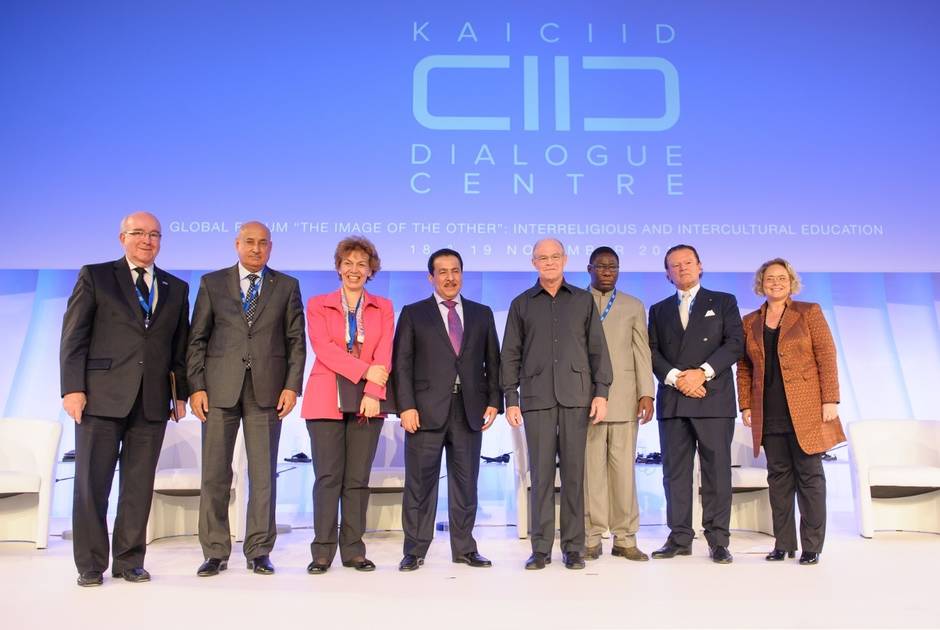 The KAICIID Global Forum on the Image of the Other in Interreligious and Intercultural Education, organized by Vienna-based KAICIID Dialogue Centre, concluded today with the announcement of cooperation agreements between KAICIID and several international partners, including the African Union, the Islamic Educational, Scientific and Cultural Organization (ISESCO), the World Scout Foundation and UNESCO.

The agreements are designed to enhance cooperation between KAICIID and these partners in the field of dialogue in other areas of joint interest. KAICIID will cooperate with ISESCO on the joint organization of dialogue training courses for Imams and Muslim scholars, and other religious leaders. The World Scout Foundation also looks to work with the Centre on a dialogue training with interfaith Scout leaders in 2014.

KAICIID Secretary General Faisal Bin Muaammar said, “Over the last two days, we have been honoured to be able to convene leading voices and authorities on interreligious dialogue and education, under the banner of our programme on the Image of the Other. This is unprecedented and tackles a critical frontier for relations between our different communities. Young people and education is a core area we have to tackle if we are to improve understanding and build better relationships that will lessen the temptations of extremism.

“KAICIID is uniquely privileged to be able to bring together experts, policymakers and religious leaders to discuss this important and sensitive subject. Through a series of regional conferences in different parts of the world, and through our Global Forum, we have listened, learned and acted as a hub where knowledge and best practices from around the world can come together and be shared.

“And now, we are very proud to announce our cooperation agreements with these international partners, as we convert the discussions of the past year into action. We look forward to a year of implementation, cooperation, and dialogue with our partners and stakeholders.”

On the subject of the cooperation, UNESCO officials said in a statement that they were “pleased to frame a cooperation agreement with this important international organization”.

In the words of UNESCO Director General Irina Bokova, “The KAICIID Global Forum is a major opportunity to promote the common ideals of our two organisations: mutual understanding based on the free exchange of ideas and the respect of cultural and religious diversity. Civil society and policymakers have to join efforts so people learn to live together in peace. The KAICIID Global Forum is indispensable in this regard. It is an active laboratory of shared values, a living embodiment of the power of dialogue for peace.”

The Global Forum hosted a lunch panel of high-level religious leaders who came together to discuss the possibilities and challenges of cooperation and dialogue in conflict zones.

Speaking after the panel, KAICIID Board Member Hamad Al-Majed said, “Religiously motivated conflicts are a problem in our world. But religion is also a part of the solution, and this panel was a step in the direction to cooperation on these solutions. Conflict and violence are usually caused not by religions, but by misunderstanding of others. This is why we are all here today, to discuss how religion can play a positive role in promoting understanding for peace through dialogue.

“This ability to bring religious leaders, policymakers and experts together to discuss and dialogue is a unique advantage that KAICIID brings to its role as an intergovernmental organisation with a Board of Directors made up of leaders from major religious traditions. The Global Forum combined high-level panel discussions with grass roots capacity-building sessions and workshops focused on improving interreligious and intercultural education on the ground. This is in some part due to KAICIID’s ability to bring different stakeholders to the table.”

KAICIID also announced the launch of its Global Policy Network, a nexus of global experts and governmental focal points from Ministries of Education, Religious Affairs and Integration who will convene to discuss key interreligious and intercultural issues in formal and non-formal education. The Global Policy Network is the first of its kind in interreligious education. Centred on building mutual understanding and sharing diverse best practices, it presents an unparalleled platform for decision-makers to join in deep discussion of policies relating to education in a world of increasing religious and cultural diversity.

The Global Forum began with remarks from the KAICIID Board of Directors and Cardinal Jean-Louis Tauran, President of the Pontifical Council for Interreligious Dialogue in the Roman Curia at the Holy See, which is a Founding Observer to KAICIID. Representatives of the Council of Parties to KAICIID (the Republic of Austria, the Kingdom of Saudi Arabia and the Kingdom of Spain) welcomed participants to the Forum on 19 November.

On 18 November, participants were offered a series of capacity- and skill-building workshops, on topics ranging from curriculum design and teacher training, successful network building, and monitoring and evaluation.

On 19 November, attendees took part in the KAICIID Dialogue Experience, comprising interactive discussions of 10 to 12 people. These were on themes ranging from challenging stereotypes and misconceptions and curriculum development in increasingly technological societies through to the challenge of the coexistence of secular and religious world views.

The Global Forum closed with a panel discussion on the future of dialogue. Moderated by Canon Alistair Macdonald-Radcliff, the panel featured Federico Mayor Zaragoza, former Minister of Education and Science of Spain and former UNESCO Director General; Bahia Hariri, a member of the Lebanese Parliament; UN High Representative for the Alliance of Civilisations Nassir Al-Nasser; former Minister of Culture and Information of Saudi Arabia, Iyad bin Amin Madani; and Shaun Casey, Special Adviser to the US State Department’s Office of Faith-based Community.

KAICIID was established in November 2012 in order to create a pioneering and leading global hub for dialogue among followers of diverse religions and cultures. Today, the Centre actively creates opportunities, including conferences and education programmes, for the world’s religions and cultures to come together to discuss change in the field of intercultural and interreligious affairs. KAICIID is governed by a Board of Directors, consisting of representatives of major world religions (Judaism, Christianity, Islam, Hinduism and Buddhism) and cultures. The Dialogue Centre receives support from the governments of Saudi Arabia, Spain and Austria, each of which has representation on the Centre’s Council of Parties.

“The Image of the Other,” is KAICIID flagship programme and a multiyear initiative exploring how “Others” - people of different religious or cultural backgrounds – are depicted in the spheres of education, media and the Internet. In its first year, the programme is dedicated to highlighting and strengthening interreligious and intercultural education as a means to promote mutual understanding in a spirit of dialogue. Over the year, four regional conferences were held in Vienna, Austria; Addis Ababa, Ethiopia; New Delhi, India and Buenos Aires, Argentina. The KAICIID Global Forum in Vienna on 18 and 19 November 2013 is the culmination of this year’s work. The forum brings together 500 thought leaders in intercultural and interreligious education, government officials and eminent religious figures.