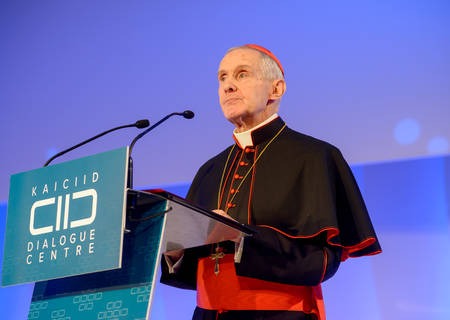 Vienna, 6 July 2018: The Board of Directors of the International Dialogue Centre (KAICIID) received with great sadness the news of the passing of Cardinal Jean-Louis Tauran, President of the Pontifical Council for Inter-religious Dialogue, Camerlengo of the Holy Roman Church on 5 July 2018.

His Eminence Cardinal Tauran was a lifelong advocate of dialogue, both among followers of different religions, and between religious institutions and policymakers, with the goal of helping as many people around the world live their lives in an atmosphere of “freedom and serenity”. In his capacity as President of the Pontifical Council for Inter-religious Dialogue, a post to which he was appointed in 2007, he pioneered a number of visionary initiatives for the promotion of Christian-Muslim dialogue, including the resumption of collaboration between al-Azhar and the Holy See and the establishment, in 2017, of a joint project to discuss how they could work together in combating religious extremism that uses God’s name to justify violence. Cardinal Tauran also led the high level Vatican delegation to meet King Salman, The Custodian of the Two Holy Mosques, in April 2018.

Cardinal Tauran has been a friend and supporter of the International Dialogue Centre since its establishment in 2012. At the founding of the Centre in Vienna in November 2012, he spoke warmly of his support for the Centre, which he hoped would contribute to peace with initiatives grounded in "vision, Honesty and Credibility".

His friendship and support for the Centre continued unabated since then even when his long battle with ill-health prevented his presence at the Centre. During his visit to Riyadh, he met with the Secretary General of KAICIID, His Excellency Faisal Bin Muaammar where he reiterated his belief in interreligious dialogue.

At this meeting, he said: “With KAICIID we have a long and deep relationship. First of all we are all more than friends; we are brothers and sisters. In the world in which we live, I believe it is important to show that it is possible to live, to work and to build between Christians and Muslims. If you look at history, when Muslims and Christians have been in harmony, the world changed and it created great civilizations.

In the context of today, when you take time to listen, you realize people are better than they appear. When you think of the young generation, you can look at the situation today, you can say that there is a tremendous cultural crisis because we have been unable to convey to the new generation our patrimony of our religious, philosophical, literary and cultural heritage. So now we have to show and teach the young generation that plurality is not a threat, it is richness. We need to be concrete so that finally we realize that this world in which we live, the Earth, is God’s patrimony. It is given to us for a period of time. But we have to give account to God at the end. Let us continue this work of mutual knowledge.”

Born in Bordeaux, France in 1943, Cardinal Jean-Louis Tauran was ordained a priest on 20 September 1969. In March 1975 he entered the diplomatic service of the Holy See and was assigned to the Apostolic Nunciature of the Dominican Republic, and was later transferred to the Apostolic Nunciature in Lebanon. He represented the Holy See at the Organization for Security and Cooperation in Europe, and in 1988 was appointed Undersecretary of the Council for the Public Affairs of the Church.

On 20 December 2014 Pope Francis nominated him Camerlengo of the Holy Roman Church.

The Secretariat and the Board of Directors of KAICIID offer their sincere and heartfelt condolences to the many people who have lost a friend and role model in Cardinal Tauran, and dedicate themselves to continue his legacy of friendship and harmony for all people.