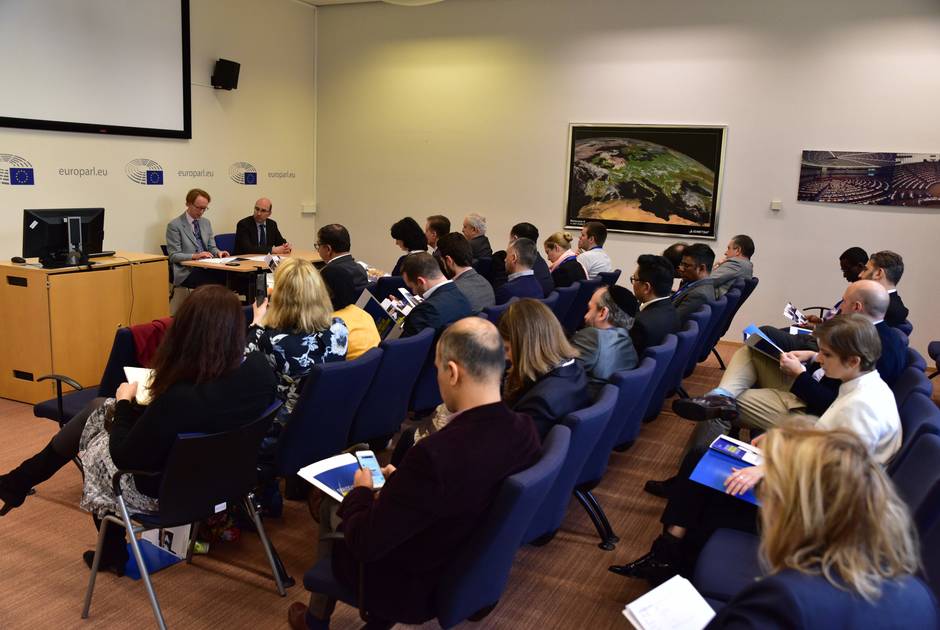 BRUSSELS 14 March 2019 - Religious leaders, academics and civil society members visited Brussels this week and were at the European Parliament to have talks with EU officials and representatives of local faith-based organizations. The visit was organized by the Vienna-based International Dialogue Center (KAICIID). It brought together members of the KAICIID Fellows Programme from more than ten European countries, representing many Christian, Jewish, Muslim (including Sunni and Shi’ia), Hindu and Jewish denominations.

The First cohort of the European Region Fellows Programme was hosted at the European Parliament HQ in Brussels by Mr. Fearghas O’Beara, Adviser to the EP Vice-President Ms. Mairead McGuiness. Mr. O’Beara delivered a presentation along with Mr. Vincent Depaigne, the European Commission’s coordinator of Dialogue with Churches, Religions and Philosophical and Non-confessional Organizations. They pointed out that Article 17 of the EU Treaty commits the Union to engaging with religious communities and organizations and explained the various mechanisms through which this dialogue is being conducted.

Asked about the protection of religious freedom and rights in individual EU member states, Depaigne said that national laws must be in line with EU law, and that the European Commission could intervene in those cases where EU law is not respected. O’Beara pointed out that the EU serves as an entry point for faith-based organizations and that he and other officials were happy to facilitate meetings to resolve issues of contention in member states.

Metropolitan Emmanuel, the exarch of the Ecumenical Patriarchate of Constantinople and a member of the Board of Directors of KAICIID, said that despite many advances, European integration remained fragile and needed to be defended constantly. “As religious leaders, we need to fight for the European construction, we need to maintain Europe united, we need to keep the flame alive,” he told the group.

KAICIID Deputy Secretary General Amb. Alvaro Albacete invited the Fellows to get inspired from those discussions and to take forward the task of building interreligious and intercultural harmony through their initiatives.

“Since its establishment, KAICIID aimed at building a solid network of partners with cross-cutting strategic expertise. We are proud to say that we have established effective working relations with a variety of EU Institutions,” the DSG said.

Dr. Elizabeta Kitanovic, executive secretary for Human Rights at the Conference of European Churches, also spoke at the meeting.

­About the Fellows Programme

The KAICIID International Fellows Programme brings together leaders and educators from different religious backgrounds from around the world for training in dialogue facilitation, intercultural communication and promoting social cohesion by KAICIID experts. The programme equips Fellows with the skills to educate their students and communities about interreligious dialogue so they can become facilitators and leaders in the dialogue and active peace advocates in their communities.  The Fellows are be trained in interreligious dialogue by KAICIID and will implement projects to promote interreligious understanding and coexistence in communities across Europe.