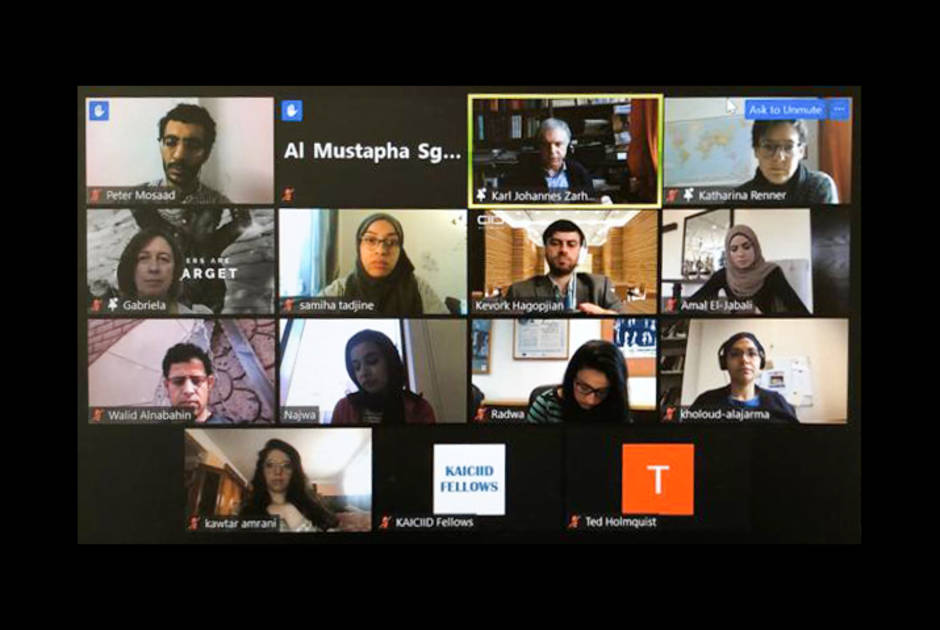 Over the last two weeks, the International Dialogue Centre (KAICIID) has collaborated with the United Nations Alliance of Civilizations (UNAOC) Fellowship Programme by virtually hosting the visit of 2020 UNAOC Fellows to Austria and providing trainings.

Tackling the central theme of this year’s UNAOC Fellowship Programme, ‘Building Peace in the Age of New Media’, KAICIID staff emphasised the importance of the media in conflict de-escalation.

“As peace builders we need to be aware of the responsibilities and role of media, both traditional and digital, in escalating and de-escalating tensions,” said Maya Sukar, a trainer at the Centre who, along with Rev. Mike Waltner, led the virtual session.

Religious Leaders and the Media

The UNAOC Fellows, a group of 22 young civil society leaders and journalists from Europe, North America, the Middle East and North Africa, were shown how cross-community discussion and the media are interdependent forces, and that together they can challenge the spread of hate speech and fake news.

KAICIID’s expertise in supporting the media, religious leaders, peace practitioners, civil society organizations, and faith-based organizations in the Arab world was an area of particular focus, as was its work to promote peace and counter extremism in the region.

Best practices in this regard were illustrated with two specific examples: the Centre’s ‘Social Media as Space for Dialogue’ scheme, which has been operating since 2015; and the new ‘Dialogue Journalist Fellowship’, set to be implemented next year.

IRD and its Importance

The second area of tuition — interfaith dialogue and its importance — started with an exploration of KAICIID's composition, structure, and mission.

The UNAOC Fellows were then taught why religion and interfaith relations are critical to social, political, and economic progress, and why interreligious discussion can help shape future development. Within this, the vital role of community dialogue in building trust, understanding, and facilitating cooperation was underscored, as was the importance of meaningful engagement between policymakers, religious leaders, people of faith, and faith institutions.

In addition to the trainings, UNAOC Fellows from the MENA region virtually visited Austria and had four meetings with KAICIID and Austrian stakeholders on October 22. The discussions focused on the promotion of interreligious and interfaith dialogue in the pursuit of social cohesion as well as the role of media in peacebuilding.

The Fellows met first with members of the print and broadcast media — Martin Tschiderer, politics editor at Wiener Zeitung newspaper and Lukas Kimeswenger, a reporter at ATV Chanel — as well as Martin Newland, KAICIID’s Director of Communications.

The cohort then heard from representatives of civil society, including Katharina Renner of CARITAS Austria, Karl Zarhuber from the International Federation of Red Cross and Red Crescent Societies, and Gabriela Poller-Hartig, the Austrian Red Cross’s Head of International Relations.

The next speaker was Minister Plenipotentiary Alexander Rieger, who shared his experiences as Head of the Dialogue Unit at the Austrian Ministry for Foreign Affairs and presented the Intercultural Achievement Award and best practice models for multisectorial dialogue projects.

The day was rounded off with words from religious and community leaders, including KAICIID DSG Ambassador Alvaro Albacete, Rev. Mike Waltner of the Anglican Church in Vienna, co-founder of the Initiative for Muslim Austrians Amina Baghajati, and Rabbi Schlomo Hofmeister, Chief Rabbi of the Vienna Jewish Community.

During the session, KAICIID’s commitment to helping young, enthusiastic leaders foster mutual understanding between peoples of different cultures and religions was highlighted, as was the Centre’s belief that civil society representatives and journalists — like the UNAOC Fellows — have a key role to play in helping policymakers reject violent extremism and embrace diversity.

The ravages of COVID-19 were touched on, too, with the recognition that though hit particularly badly by the pandemic’s economic and social fallout, young people have played a crucial role in campaigning for cooperation in the face of adversity, and amplifying the voices of those left behind.

The meeting came as KAICIID and the UNAOC renewed their joint commitment to the promotion of faith-based organizations, youth, women, and media in advancing interreligious and intercultural dialogue, particularly in societies affected by identity-based conflicts.

“It is my hope that this deepened cooperation between the United Nations Alliance of Civilizations and the International Dialogue Centre will contribute to strengthening global partnerships around Agenda 2030, and to emphasising the importance of the shared values of human dignity, tolerance and respect that are the basis of all the world’s religions,” Bin Muaammar said.

Official partners since 2017, KAICIID and the UNAOC have coordinated and pursued numerous joint intercultural and interfaith initiatives, with a view to increasing the efficiency and effectiveness of their respective work in the fields of peacebuilding and sustainable development.