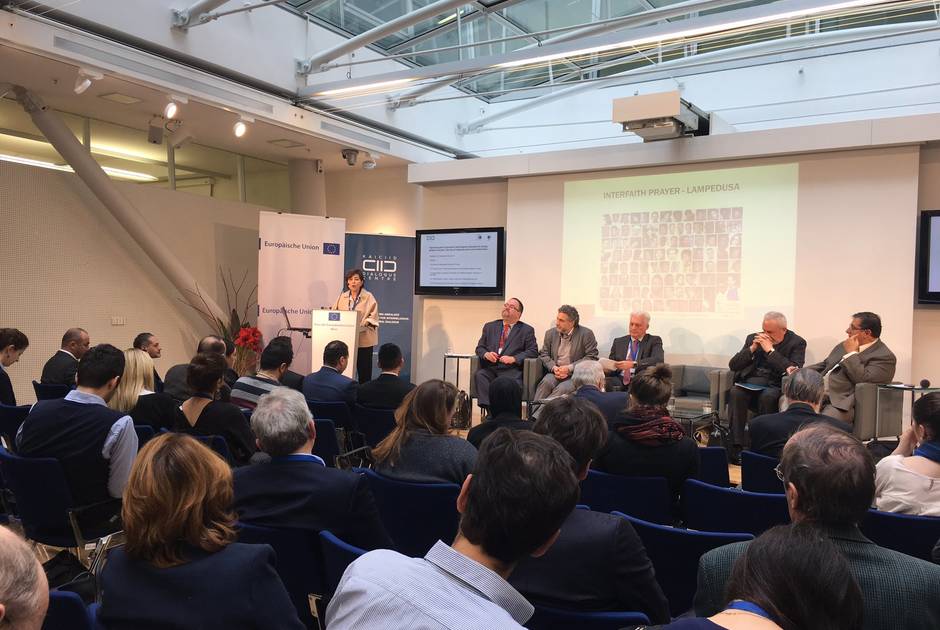 The International Dialogue Centre and the European Commission Representation in Austria co-organized a two-day Experts Workshop in Vienna, where participants developed recommendations to help young people seeking refuge more effectively integrate in European society. The workshop took place at the headquarters of the International Dialogue Centre and the House of the European Union. It aimed to align the efforts of existing organizations and individuals actively supporting the integration of newcomers to Europe, by developing recommendations on policy and programmes, as well as exploring potential partnerships across Europe.

The workshop convened experts from the policy community, faith-based actors, and welfare organizations who examined the perspectives of young people seeking refuge in Europe, to better understand how they see the world and perceive the religious ‘Other’. Through the activities and discussions of the workshop, they sought to understand the driving factors behind these perceptions, and created policy and programmatic recommendations to address these.

The first day of the workshop focused on gathering participant inputs, and identifying challenges and best practices. The following day was spent mainly in breakout groups in which participants dicussed in-depth and developed recommendations.

KAICIID Board Member Metropolitan Emmanuel said, “Each religion provides a foundation for building a world of respect, solidarity, and safety for migrants.” He went on to say: “Religion is a huge part of the equation in moving forward in development and continuity.”

The Deputy Head of the European Commission Representation in Austria Wolfgang Bogensberger welcomed the cooperation with the International Dialogue Centre, reiterating some common values that both the European Union and the Centre endorse. He said: “There is simply no place for racism, antisemitism, Muslim hatred, or a xenophobic attitude… and we need to work together to get rid of these ideologies of hatred.”

Panels on the first day emphasized how young people seeking refuge see the world, how they perceive the other, and what European institutions and faith-based organizations can do to support their integration into their host communities, and ultimately support enhanced social cohesion.

The second day of the workshop opened with a video message from the Head of the European Commission Representation in Austria Joerg Wojahn, where he emphasized the EU’s values, which also inform the work of the International Dialogue Centre, “The EU is a place of multicultural, multireligious, and multiethnic diversity. Here, people are living together, of different faiths, different ethnicities and different national backgrounds and languages… We are trying to always deepen this and the most important means of deepening this is dialogue.” He went on to say: “I am personally, also, very pleased to cooperate on this with the International Dialogue Centre. I appreciate the efforts of the Centre that are being made here in Vienna and in Europe, and I think that there are many things we can do together as European Union Institutions and the Centre.”

The International Dialogue Centre Director General Fahad Abualnasr also expressed the Centre’s appreciation for the collaboration with the European Union, “We held the first day of the workshop in the Centre’s headquarters and today we are very grateful that workshop is hosted at the House of the European Union.” He went on to say, “The many decades of peace in Europe are the result of respect and understanding gained through dialogue. We hope to learn from you and collaborate with you to support a future in which young people across Europe find common understanding and acceptance. Young people are tomorrow’s leaders. Their capacity to appreciate and to communicate diversity as an asset will also support solidarity.”

A panel discussion among representatives from intergovernmental organizations, faith-based organizations, and humanitarian aid institutions addressed the topic of interreligious education and the role of faith-based actors and communities.

UNHCR Representative to Jordan, Stefano Severe pointed out that faith actors are widely present with vast grassroots organizations and networks that support educational programmes, as education is central to refugee protection.

Monica Attias of the Sant’Egidio Community said, “We need to bring back religion into our culture… We have to help – not only migrants – but also Europeans find a positive religious identity, not against the other.”

Other speakers on the panel addressed topics of inclusion, universal values, and openness to different lifestyles. Participants split into three working groups, where they discussed:

The recommendations generated by the workshop will be distributed to participants and key stakeholders in Europe in early 2018, including national governments, European institutions and major faith-based and secular welfare organizations, and will help KAICIID and its partners develop targeted initiatives to support this critical field.

The International Dialogue Centre Deputy Secretary General Ambassador Alvaro Albacete said, “We are grateful that our regular exchange with the European Union Commission Representation in Austria has led to this fruitful collaboration at the House of the European Union in Vienna. This is an initial step that could enable our institutions to work jointly on finding solutions to contemporary challenges.”

ABOUT THE REPRESENTATION OF THE EUROPEAN COMMISSION IN AUSTRIA