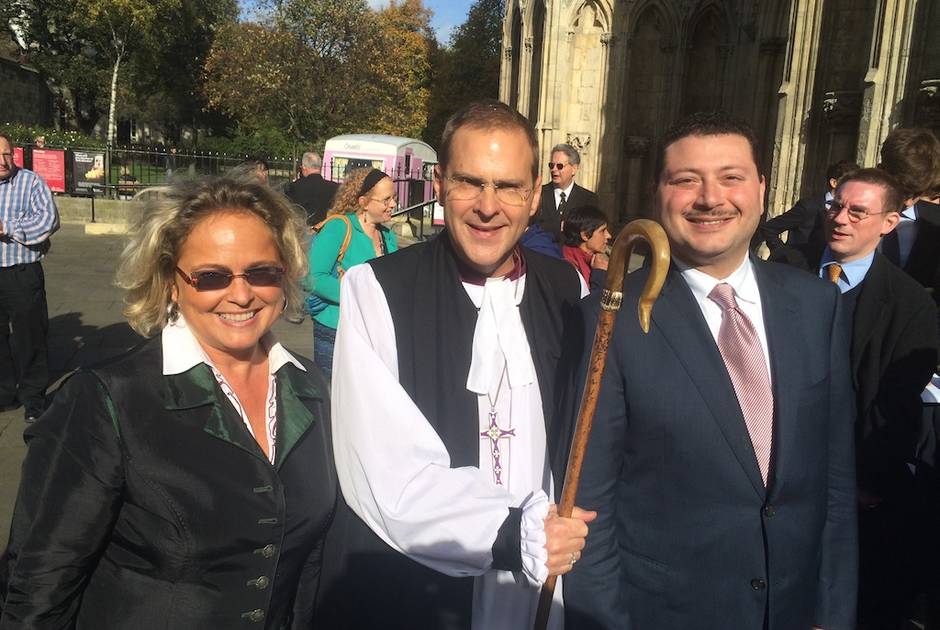 He was consecrated as Bishop in an installation service held today in York Minster, at which KAICIID Secretary General Bin Muaammar, Deputy Secretary General Claudia Bandion-Ortner, and Chief of Staff Fahad Abu Al-Nasr were present.

KAICIID Secretary General Bin Muaammar said: “I offer my warmest congratulations to Reverend Howarth on his appointment as Bishop. Reverend Howarth has been a staunch friend and ally of KAICIID for many years, as well as a voice of support and strength for the interreligious dialogue community worldwide.”

Speaking at the inauguration of the KAICIID Dialogue Centre in Vienna in 2012, Reverend Howarth described an incident in his career which describes his personal commitment to dialogue. As a Minister at a church, Reverend Howarth was invited to speak at the naming ceremony of the daughter of an Imam from a mosque in the vicinity. Although the church and the mosque had not had very good relations in the past, this small gesture led to the congregations from both places of worship engaging with each other.

KAICIID Secretary General Faisal Bin Muaammar said: “Reverend Howarth’s own work and career are testament to this very willingness to take risks: to enter into a dialogue with those who are different, even at personal cost. Our work at KAICIID benefits daily from his personal commitment to dialogue, as well as his guidance and expertise, and we look forward to continued cooperation with him in his new role.”

Reverend Dr. Toby Howarth has lived and worked in countries as diverse as the United Kingdom, Uganda and India. He studied first at Yale University and then at Birmingham University for his MA, before conducting research in India for a PhD in Islamic preaching through the Free University of Amsterdam. He trained for the ordained ministry at Wycliffe Hall, Oxford and The Queen’s Foundation, Birmingham.

From 2004 to 2011 he was Priest-in-Charge at Springfield in Birmingham Diocese. He is an Honorary Canon at All Saints Cathedral, Cairo. From 2005 he served as Inter Faith Advisor to the Bishop of Birmingham before taking up his current role in 2011 as Archbishop of Canterbury’s Secretary for Inter Religious Affairs and National Adviser for Inter Religious Affairs for the Church of England.