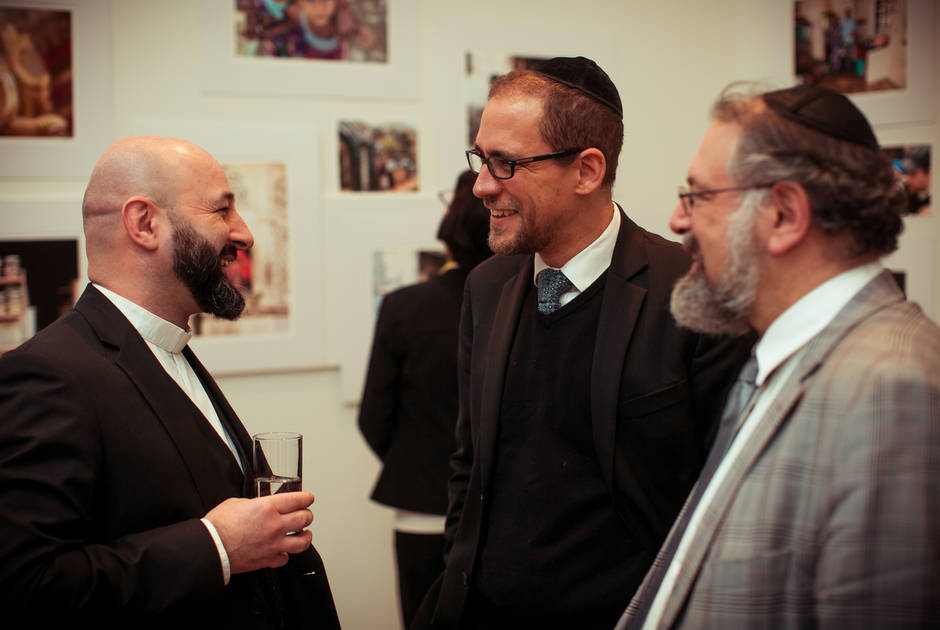 As part of this year’s global celebrations during the United Nations’ World Interfaith Harmony Week (WIHW), the International Dialogue Centre (KAICIID) gathered at its headquarters in Vienna a diverse, capacity audience for the opening of the photo exhibition "Interreligious Encounters in India - A model for Europe?“ retracing Community Rabbi Schlomo Hofmeister’s interreligious journey through India.

Addressing the  audience, H.E. Ambassador Al Husseini spoke on the genesis of World Interfaith Harmony Week, an initiative first proposed by H.M. King Abdullah II of Jordan and highlighted the importance of interreligious dialogue and peaceful coexistence stating that “It is depressing to see that people are ready to fight for God and in the name of God, but not ready to love for God and forgive in the name of God” and how “God that creates love cannot be pleased with hate, in other words God and evil cannot be one”. He called upon the audience to “celebrate our diversity with respect and faith”.

Vienna’s Community Rabbi Schlomo Hofmeister shared with the audience his experiences encountering people of different faiths in India and drew parallels to interreligious coexistence in Europe. While challenges do exist in India’s multireligious, pluralist society, the Rabbi explained that the concept of Indian identity is not primarily tied to a religious belief but rather to common citizenship. He remarked that, in contrast to Europe, where discussions revolve about whether or not Islam or Judaism “belong to Europe”, in India members of different religious communities would not be regarded as “not belonging”. In this regard, India could, indeed, serve as a model for Europe, particularly in times when populism is on the rise, accompanied by an alarming surge of anti-Semitic and Islamophobic tendencies.

Rabbi Hofmeister went on to open the photo exhibition, displaying, for the first time, the impressive visual documentation of the journey he undertook in 2015. With professional photographer Gina Salame Hanono, Rabbi Hofmeister travelled more than 3000 km from the Himalayas to the Arabian Sea.

Many members of the diverse audience took the opportunity to engage in an individual dialogue with the Rabbi and with each other while enjoying Kosher and Indian specialities.

Subsequently, the photo exhibition ‘Interreligious Encounters in India - A model for Europe?" was opened to the public and dignitaries.

In October 2010, the United Nations recognized the imperative need for interreligious dialogue to enhance mutual understanding and tolerance among people of different nations. Henceforth, the first week of February has been celebrated annually as the World Interfaith Harmony Week among all religions and faiths.

WIHW was first proposed by H.M. King Abdullah II of Jordan and was, a month later, unanimously adopted in a resolution by the UN General Assembly. The idea originated from the 2007 ‘Common Word Initiative’ aimed at interreligious dialogue, by calling for common ground and understanding between Christian and Muslim leaders to promote peace. As a result of the initiative, WIHW provides an opportunity for people of all faiths to engage in interreligious activities and to promote harmony and tolerance.

To receive invitations to KAICIID’s public events in Vienna, register at [email protected]