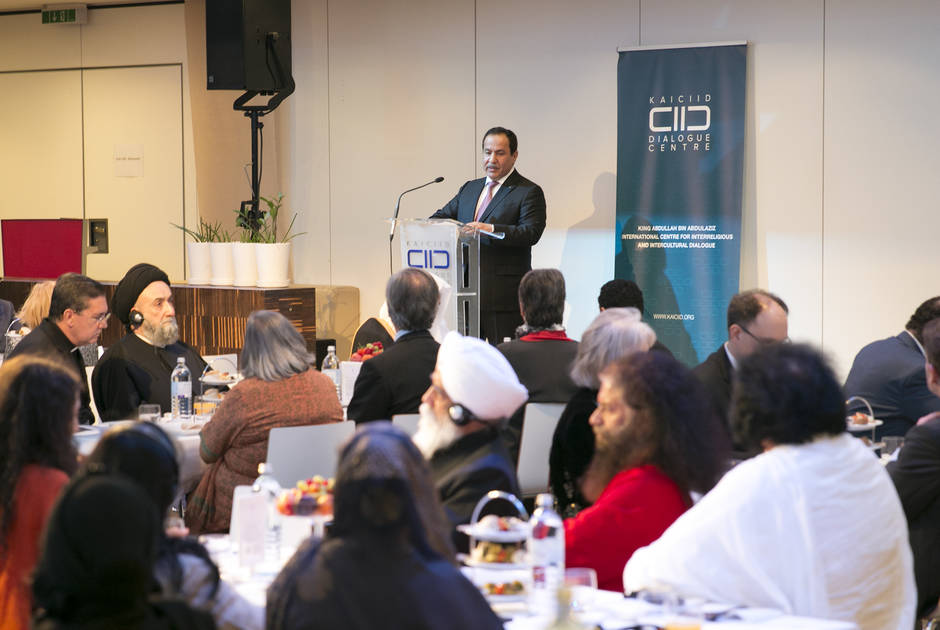 As part of this year’s global celebrations during World Interfaith Harmony Week (WIHW), the International Dialogue Centre (KAICIID) hosted an evening buffet and networking event with participation from KAICIID’s Board of Directors, Advisory Forum and local religious and lay leaders. The event highlighted the significance of interreligious dialogue as a tool for overcoming communal challenges and provided a possibility to share and discuss best practice examples.

KAICIID Secretary General, Faisal Bin Muaammar, welcomed numerous renowned members of the Austrian interreligious community and diplomatic representatives while emphasising the pressing need for interreligious dialogue: “I see today a much more urgent need to build bridges between different people and religions. I know that we all agree that dialogue is the best way to create a sense of shared values and respect between diverse groups. A shared sense of common principles and goals supports social cohesion. Social cohesion supports robust communities that resist discrimination and bias”.

The KAICIID Secretary General was joined by the newly appointed Secretary General of the Muslim World League, H.E. Dr. Al-Issa, who had travelled to Vienna, the city of dialogue, on the occasion of WIHW. Dr. Al-Issa noted the efforts of international organizations, notably KAICIID, in promoting the values of interreligious dialogue between followers of different religions and cultures, including mutual understanding and respect.

On behalf of KAICIID’s Advisory Forum, Ela Gandhi emphasized the need to encourage love rather than hatred to proactively create conditions of peace for our descendants. Her remarks were followed by Dietmar Böhmer, a longstanding dialogue advocate and founder of the interreligious initiative MenschenRechteReligion, who together with the Iraqi asylum seeker Quasi Albajati shared the two sides of a successful refugee integration story in Austria’s rural Styria.

Kaur shared with the capacity audience the interreligious work of her Sikh organization in India that is providing humanitarian relief to all religions and working to create an environment for dialogue, where all people can feel comfortable with each other. Palmieri spoke about her personal experiences, growing up as a Jewish minority in a predominately Catholic country and how she went back to the schools where she had experienced discrimination to enable dialogue between people of majority and minority religions. Thereby she highlighted the importance of standing up for each other in the face of bigotry and hate. As an exemplar of interreligious dialogue, Canon Dr. Smith introduced the participants to a Christian charity he had founded in Birmingham, called ‘The Feast’ that is working to bring together Christian and Muslim youth to build friendship and understanding. It now has mirror organizations in three other British cities as well as Beirut and Berlin.

The event was hosted at the Albert Schweitzer House, a Viennese non-profit venue operated by the Lutheran (Protestant) charitable and humanitarian religious organization, ‘Diakonie’. The former church has been hosting people from different world regions, cultures and social backgrounds since the 1960s, thus it was deemed an appropriate location for KAICIID’s WIHW celebrations.

In October 2010, the United Nations recognized the imperative need for interreligious dialogue to enhance mutual understanding and tolerance among people of different nations. Henceforth, the first week of February has been celebrated annually as the World Interfaith Harmony Week among all religions and faiths.

WIHW was first proposed by H.M. King Abdullah II of Jordan and was, a month later, unanimously adopted in a resolution by the UN General Assembly. The idea originated from the 2007 ‘Common Word Initiative’ aimed at interreligious dialogue, by calling for common ground and understanding between Christian and Muslim leaders to promote peace. As a result of the initiative, WIHW provides an opportunity for people of all faiths to engage in interreligious activities and to promote harmony and tolerance.