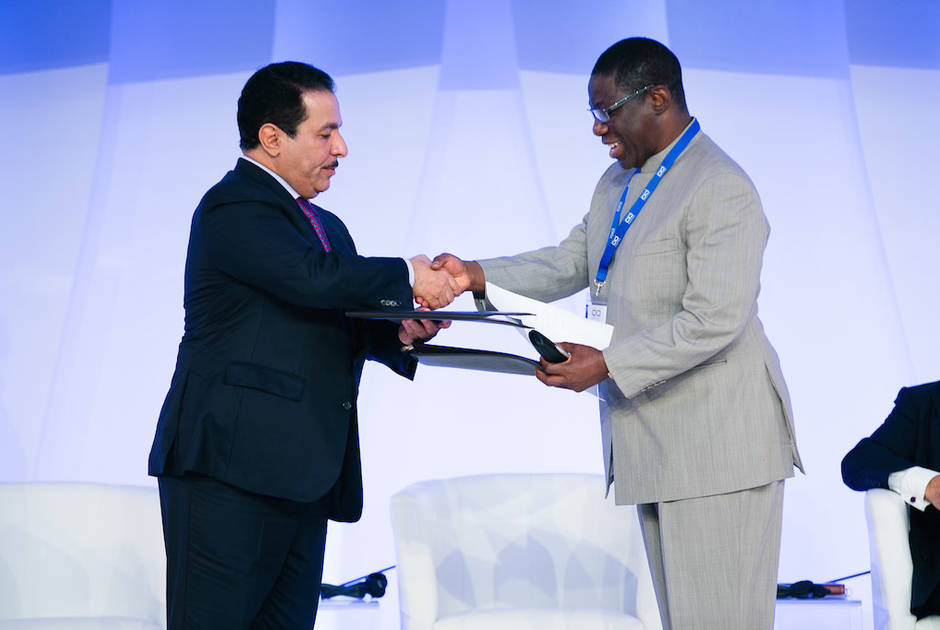 © Dr. Jinmi Adisa, Director of the African Citizens Directorate (CIDO) at the African Union, and KAICIID SG Faisal Bin Muaammar at the signing of a Memorandum of Understanding between their two organisations, November 2013. Copyright: KAICIID

This visit is a further step in the implementation of a Memorandum of Understanding (MoU) concluded between KAICIID and the African Union. The MoU was signed on behalf of the African Union Commission at the KAICIID Global Forum in November 2013 by Dr. Jinmi Adisa, Director of the African Citizens Directorate (CIDO).

Within the framework of the MoU, KAICIID and the African Union will collaborate on identifying and connecting partners among the African Union’s Member States, including universities and seminaries, experts and educators, faith leaders and institutions to advance the field of interreligious and intercultural education. KAICIID has launched an Interreligious Education Programme to support working-level policymakers and curriculum developers in the field of interreligious and intercultural education.

KAICIID will also partner in the convening of the African Union Interfaith Dialogue Forum, a permanent steering committee consisting of senior religious leaders and policymakers, tasked with advancing cooperation between the AU and Africa’s religious communities to reduce conflict and coordinate peace and development efforts.

In the context of rising conflict, KAICIID brings to bear its convening power as an intergovernmental organisation and its access to religious leaders around the world to advance multi-religious dialogue processes in the region.

On the occasion of the signing of MoU, Dr. Jinmi Adisa, AUC Representative, said “Since the end of the Cold War, religious differences have assumed importance as a major source of conflict in the global environment. The rise of Al-Qaeda, the Taliban, and the conflicts in Afghanistan, Pakistan, Iraq, Libya, Syria, Central and Western Africa underline its rising profile as a mainspring of antagonisms, death, crisis and destruction, states failures and regional convulsions.  Yet much of this has been caused by abuse and violation of religious principles and their deliberation distortion and misuse.  The collaborative effort of the African Union and KAICIID has roots in their common vision and related effort to combat the use and abuse of religious principles and the investment of both institutions in the use of religions to promote understanding, build trust, respect to each other, tolerance, social harmony, security and development all over the world in general and Africa in particular.”

KAICIID Secretary General Faisal Bin Muaammar said: “This announcement comes at a time of daily news that links conflict with religion: in Africa and in other regions, we are facing many conflicts. KAICIID was founded to combat and counteract the abuse of religion to justify oppression, violence and conflict. To achieve lasting peace and coexistence, we must work together: policymakers, religious leaders and followers of different religions and cultures must unite towards this goal.”

“For many reasons, we are exceptionally glad to be working with the African Union. The African Union has shown itself ready to include religious leaders in dialogue for peace, and we look forward to working with them toward our common goal, of stemming the tide of violence and conflict in the name of religion.”

KAICIID’s cooperation with the African Union Commission began with the regional conference on Interreligious and Intercultural education, held in Addis Ababa at the African Union Conference centre in August 2013. The conference in the Ethiopian capital convened over 30 religious leaders, policymakers and experts working in the field of education, to discuss best practices, challenges and recommendations for this sensitive and important field. Findings from the day-long working meeting were collated in a conference report.

Recommendations from the African regional conference, together with similar events held in Vienna, Austria; Buenos Aires, Argentina, and  New Delhi, India; were showcased at the KAICIID Global Forum in November 2013, a first-of-its-kind event which brought together a diverse group of more than 500 stakeholders, including high-level religious leaders and Ministers of Education from around the world. Ambassador Mussie Hailu, representative of United Religious Initiative at the Economic Commission for Africa and the African Union, and Mr. Filipe Alimo Furuma, Policy Officer and Interfaith Desk at the African Union also participated in the KAICIID Forum.

The experts and religious representatives discussed how international and local organisations can take concrete action to prevent the further deterioration of the situation in Central African Republic. The participants are also helping KAICIID formulate its peacebuilding strategy for the Central African Republic through the facilitation of an inclusive dialogue between religious communities in the country. Ambassador Mussie Hailu who facilitated the working partnership between KAICIID and AUC also took part in these consultations.

KAICIID was established as an international organization in November 2012 to facilitate dialogue among followers of different religions and cultures. KAICIID organizes training, workshops, conferences and educational programmes, and support the mediation of conflict. KAICIID carries out activities under the oversight of a multi-religious Board of Directors and its Council of Parties, comprised of the governments of Austria, Saudi Arabia and Spain, as well as the Holy See, the Founding Observer.