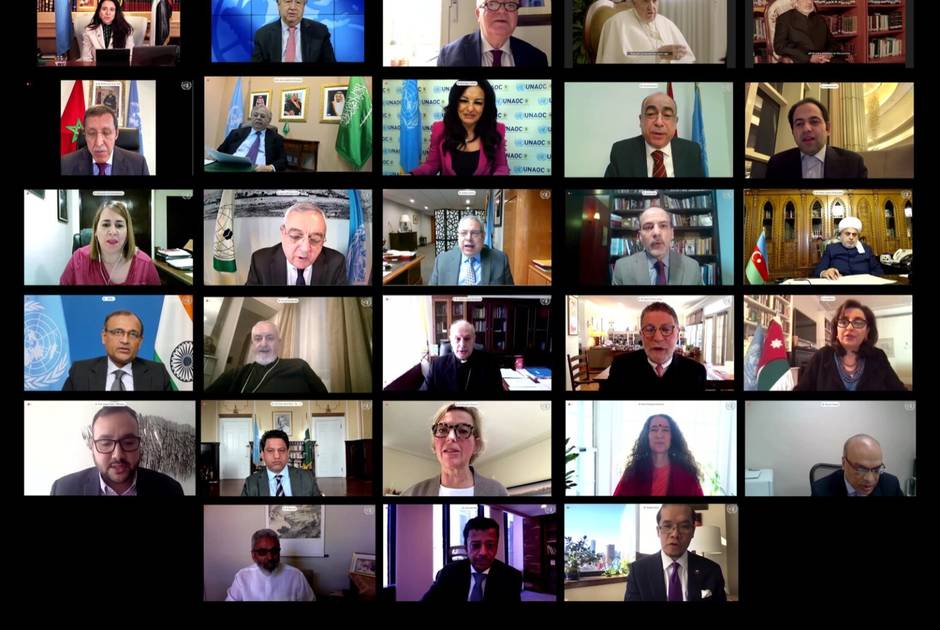 Among the participants were KAICIID Board Members Metropolitan Emmanuel and His Virtue Allahshukur Pashazade, who spoke alongside the Secretary General of the United Nations Antonio Guterres and the High Representative for UNAOC Miguel Moratinos, among others. This timely event denotes the value and significance of cooperation between religious leaders and policymakers, and can be considered a show of recognition from policymaking institutions for the value of interreligious dialogue.

“Cultural diversity and freedom of belief are part of the rich tapestry of all civilisations. As we commemorate the International Day of Human Fraternity, let us commit to more… to promote cultural and religious tolerance, understanding, and dialogue.”

“Observing an international day of Human Fraternity is needed now more than ever before considering the deplorable fragmentation of our world today,” said UNAOC’s High Representative Miguel Moratinos. “We are not only facing the ramifications of a pandemic, but also the contagious virus of hate, discrimination, and racism. The antidote is human fraternity which embodies compassion, solidarity, unity and mutual respect,” he continued.

A recognition of religious values

“World Interfaith Harmony Week and the International Day of Human Fraternity elevated to global status by UN proclamation, are a recognition of religious values as avenues to a policy of just and fair human development.  We, in the religious world, must in turn unite to better engage with this ideal.”

Also speaking at the event, KAICIID Board Member His Virtue Allahshukur Pashazade praised the role of UNAOC towards universal peace and mutual understanding.

Ahead of the first Day of Human Fraternity, KAICIID Board Member Cardinal Ayuso spoke exclusively to KAICIID in a podcast about the importance of the initiative and how it came about. He reflected on the process as one of the main architects of the initiative; having worked side-by-side with the late Cardinal Tauran for many years to make it a reality and advocated for its international recognition by the United Nations, Cardinal Ayuso believes that we can only succeed together.

“This celebration is an invitation to everyone to promote interreligious and intercultural dialogue as hope… for world peace and living together… it is the responsibility of all,” he said. “It is my hope that this celebration may strengthen all the work that’s been done through KAICIID in promoting interreligious and intercultural dialogue, and encourage us all to continue living together for the common good… uniting all our efforts to create a better world, particularly… through KAICIID,” he continued.

A milestone meeting between Christianity and Islam

The 2019 meeting between Pope Francis and the Grand Imam of Al-Azhar Ahmed el-Tayyeb was not only a milestone in relations between Christianity and Islam but also represents a strong message to the international community, calling for world peace and addressing common challenges including terrorism, division, hate speech, and violence. It resulted in the Declaration of Human Fraternity, which has been recognised internationally this year.

The recognition by the United Nations of this important declaration resulting from that meeting is the highest form of international acknowledgement, which means that the values of this document are formally on the international agenda, thanks to the efforts of religious leaders who work for an inclusive future that places religious leaders and policy makers on the same dialogue table, as partners in decision making and implementation of policies that strengthen common citizenship and benefit communities all around the world. For this reason, KAICIID partners with the United Nations, including UNAOC, UNESCO, the UN Office for the Prevention of Genocide and the Responsibility to Protect, UNDP, and more. The Centre’s unique structure and mandate have strategically enabled it to connect the religious and policy worlds for sustainable collaborations and solutions to present challenges.

The Day of Human Fraternity comes as the result of the United Nations General Assembly resolution A/RES/75/200, which was adopted on 21 December 2020, proclaiming February 4 as the International Day of Human Fraternity to be observed every year as of 2021. The resolution considers efforts and initiatives aimed at promoting interreligious and intercultural dialogue, including the meeting that resulted in the “Document on Human Fraternity for World Peace and living Together”, which was signed exactly two years ago, by Pope Francis and the Grand Imam of Al Azhar Dr. Ahmed el-Tayyeb; the historic agreement aims to be a “guide for future generations,” strengthening relationships between Christian and Muslim communities and fostering peace at all levels of society.

To learn more about how the Declaration of Human Fraternity has influenced KAICIID's work, please click here.

United Nations
Board of Directors