KAICIID Board of Directors Meets Custodian of the Two Holy Mosques 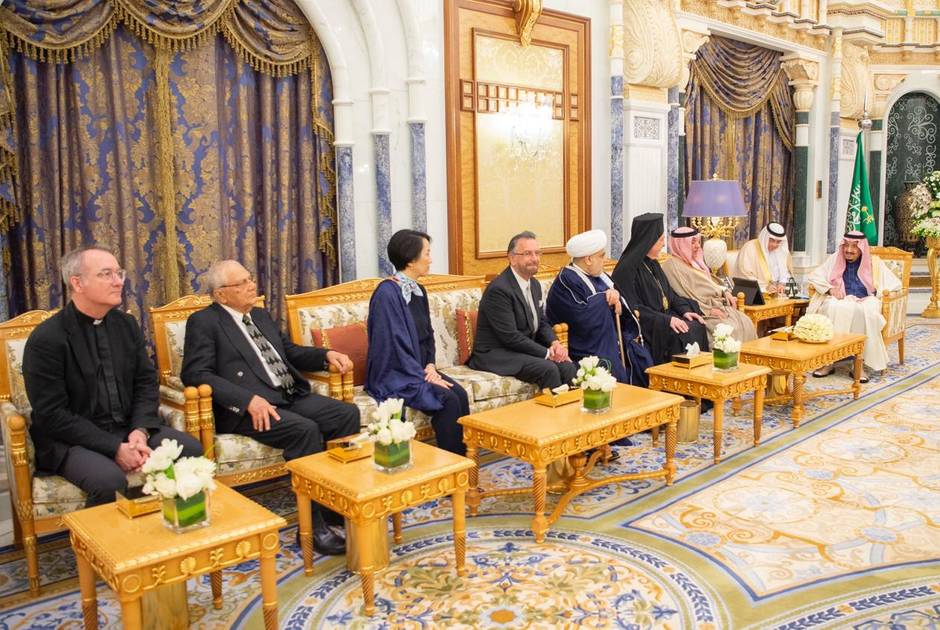 The Board of Directors of the International Dialogue Centre (KAICIID), comprising senior representatives of the world’s major religions, met this week in Riyadh, Saudi Arabia for its 22nd regular session to discuss strategy for 2020 and beyond.

During the visit, Board members, led by Faisal bin Muaammar, Secretary General of KAICIID, met with the Custodian of the Two Holy Mosques, King Salman bin Abdulaziz Al Saud to present the work of the Centre.

The Custodian of the Two Holy Mosques welcomed the board members, who were holding their first meeting in Riyadh, and stressed the importance of KAICIID's role in consolidating the principles of dialogue and coexistence among different religions and cultures, promoting the values of moderation and tolerance, and combating all forms of extremism and terrorism.

Earlier, under the Chairmanship of His Eminence Metropolitan Emmanuel of France, the Board discussed issues ranging from the expansion of the Centre’s global programmes to the evolving role of KAICIID’s multireligious Advisory Board.

Saudi Arabia, along with Austria and Spain, make up KAICIID’s Council of Parties, with the Holy See as a Founding Observer.  The Centre was founded after the late King Abdullah entered into discussions with the Holy See to explore ways to promote interreligious dialogue.

“We are grateful to the Kingdom of Saudi Arabia for hosting this meeting of our Board at a crucial time in KAICIID’s development,” the KAICIID Secretary General said.

“The Centre was born out of a vision of the late King Abdullah and the Kingdom has been a steadfast supporter of KAICIID and so it is especially appropriate for our Board to meet in Riyadh at such an important time in the development of our mission and vision.”

During their stay, Board members and KAICIID staff enjoyed a series of hospitality events and visits to sites of significance in Riyadh.  The KAICIID Secretariat, Senior Advisers and Directors also took advantage of the visit to discuss areas of cooperation with a team from the Gulf Cooperation Council led by Dr. Abdelaziz Aluwaisheg, Assistant Secretary General for Political and Negotiation Affairs.

The KAICIID Secretary General also introduced the Board of Directors to attendees at a training organized by Salam for Cultural Communication, supported by contributions from KAICIID Special Advisers Dr. Mohammed Abu-Nimer and Dr. Patrice Brodeur.

During the session, Board members answered questions from the floor on their hopes for Interreligious dialogue as a precondition for peace and mutual understanding.

About the KAICIID Board of Directors:

KAICIID is governed by a multi-religious Board of Directors, consisting of representatives of five religions: Buddhism, Christianity, Hinduism, Islam, and Judaism. The Board Members are:

His Eminence Metropolitan Emmanuel of France, Exarch of the Ecumenical Patriarchate of Constantinople

His Virtue Sheikh Ul-Islam A. Pashazade, Sheikh ul-Islam of the Caucasus