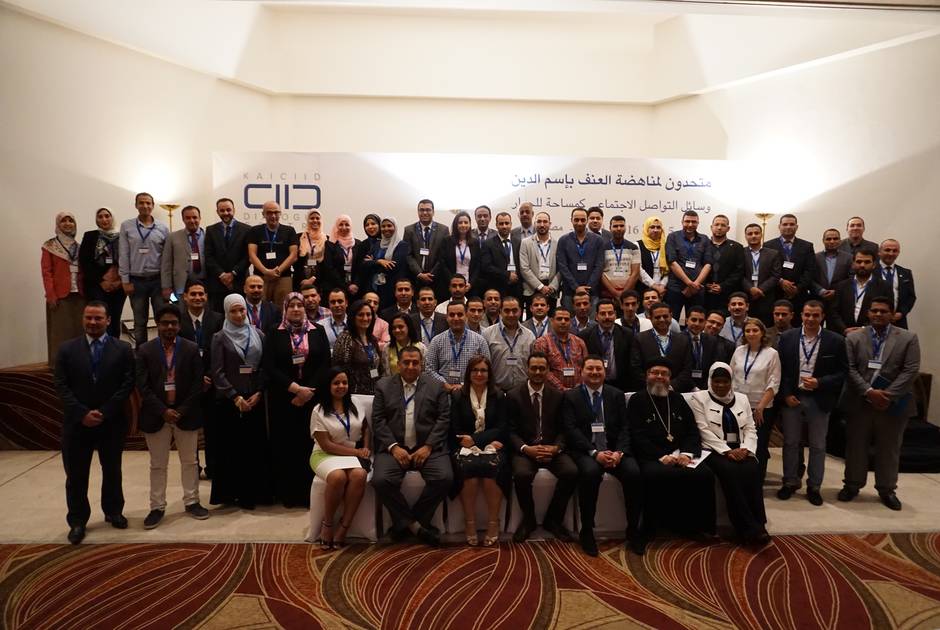 Focused on building a social media space for tolerance and respect, 85 young religious leaders and civil society representatives who are already engaged in interreligious dialogue took part in a KAIICID social media training in Cairo from 3 to 5 May 2016. The trainees in this workshop reflect the religious diversity in Egypt, and were recommended by KAICIID’s partners in the country: Al-Azhar University, the Coptic Church, the Coptic Evangelical Organization for Social Services and the House of Fatwa.

This workshop, the second in a series of five trainings in a regional programme organized by the Vienna-based International Dialogue Centre (KAICIID), offers practical support in using social media to promote respectful dialogue among followers of different religions.

In the course of this year, further trainings are planned in Erbil, Iraq; Tunis, Tunisia; and Dubai, United Arab Emirates. Through this regional approach, social cohesion advocates from across the Arab world will have an opportunity to join this active network of young advocates.

Misinformation and content that promotes prejudicial stereotyping, hatred, exclusion, and violent extremism is distributed on countless social media channels. Young people who consume this content are acutely vulnerable to manipulation. At the same time, social media offer a means for young people to reach across national, ethnic, and religious borders to enter into dialogue and experience the benefits of peaceful coexistence. These positive experiences can in turn enliven their peer-to-peer advocacy for inter-community understanding and respect. KAICIID’s training serves to help champions of coexistence and moderate religious leaders gain the skills to utilize social media to promote their vision and values.

“We chose to create this programme for youth because interreligious dialogue should be a way of life, and in order to make it so, young people need to adopt it. We reach the youth by working where they are – and that’s on social media.” said Fahad Abualnasr, KAICIID Director General.

“Social media builds bridges across cultures, crossing political and geographical boundaries and defeating the cultural isolation that most civilizations were living in the past. For this reason, in our time, we witness a great transformation in communication technologies and it is affecting not only politics and economics but also entire societies.” said Mohammed Abdulfadeel, Al-Azhar Representative.

The participants in each workshop are encouraged to implement social media initiatives and campaigns in their own communities and institutions. Trainees also become trainers, so that they can increase the number of online advocates in their communities.

The first training in the series was held in Amman, Jordan from 3 to 5 April 2016. The trainees at that workshop came from Lebanon, Palestine, Syria, as well as Jordan.

About the United Against Violence in the Name of Religion Initiative

In November 2014, the International Dialogue Centre (KAICIID) launched an initiative to mobilize religious leaders from across the Middle East to respond in unity to the threat of extremism engulfing the region.

Several recommendations were made by the 100+ religious leaders at the conference, including leaders of the Catholic, Orthodox Christian, Sunni, Shia, Yazidi and other religious traditions.

The International Dialogue Centre (KAICIID) is an intergovernmental organization that promotes dialogue to build peace in conflict areas. It does this by enhancing understanding and cooperation between people of different cultures and followers of different religions. The Centre was founded by Austria, Saudi Arabia and Spain. The Holy See is the Founding Observer. Its Board of Directors comprises prominent representatives from five major world religions (Buddhism, Christianity, Hinduism, Islam, and Judaism). The Board designs and supervises the Centre’s programs.

11 October 2014
United against Violence in the Name of Religion: Conference of Religious Leaders in Vienna
END_OF_DOCUMENT_TOKEN_TO_BE_REPLACED

Inner page
Vienna Declaration: United Against Violence in the Name of Religion
Features
Creativity Builds Social Cohesion: How to Turn Art into a Tool for Coexistence