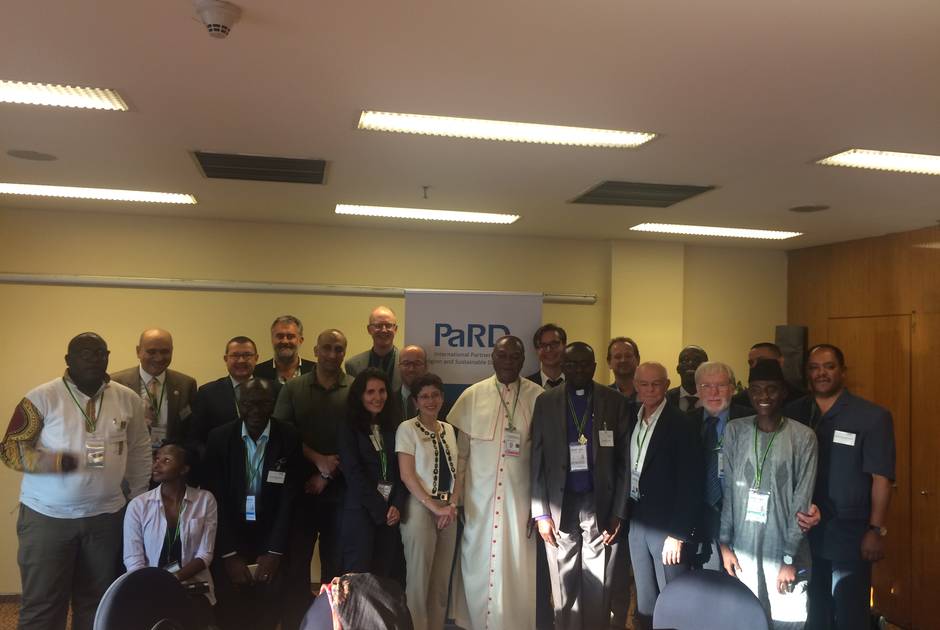 In October 2016, KAICIID continued its work with the International Partnership on Religion and Sustainable Development (PaRD) to build stronger cooperation between religious, state and multilateral actors in Nigeria.

Participating at the annual PaRD meeting, KAICIID programme manager Matthias Eder spoke about the importance of involving religious actors in addressing sustainable development goals, preventing violent extremism, and enhancing social cohesion on a panel titled “The nexus of religion and fragility = countering and preventing violent extremism”. He cited the KAICIID meeting held in September in Abuja, which brought together religious leaders from Christian and Muslim communities from Nigeria to brainstorm collaborative solutions to problems of social fragmentation and conflict.

The panel discussion also included Prof. Amr Abdalla, Senior Advisor at the Institute of Peace and Security Studies in Addis Ababa, Andreas Hipple, Senior Program Advisor of the GHR Foundation; Azza Karam, Senior Advisor on Social and Cultural Development - United Nations Population Fund; and Ulrich Nitschke of the PaRD Secretariat; and explored experiences from current and past interventions in the country. Eder highlighted the importance of inclusivity to engage the willing and the sceptical in the process of solving the most pressing issues such as violent extremism and to include vulnerable groups in addressing issues of social conflict. Additionally, he stressed the importance of not reducing the role of religion to a security issue, as this limits the scope of collaboration with religious leaders and actors. In order to ensure sustainable engagement, they need to be included in a holistic manner, according to Eder.

According to a recent study by KAICIID and partners, places of worship and religious leaders in Nigeria are not significant sources of recruitment for extremist groups, such as Boko Haram. However, a considerable number of respondents to the study did report great trust in religious leaders. These findings are a clear indication that religious leaders can play a constructive role in building social cohesion and preventing violent extremism. In this regard, KAICIID and PaRD share the conviction that religion has a positive impact in a number of areas, including sustainable development and humanitarian assistance.

The International Partnership on Religion and Sustainable Development (PaRD) was established in February 2016 at the Berlin conference “Partners for Change – Religions and the 2030 Agenda”. It brings together members and partners from all over the world in order to harness the positive impact of religion in sustainable development and humanitarian assistance. Membership of PaRD is voluntary and open to all bilateral donor countries and multilateral development agencies. Partners are civil society and non-governmental organizations such as religious organisations, NGOs, community initiatives, foundations, academic institutions and other relevant development organisations.

PaRD recognises the crucial role that these groups play in achieving the Sustainable Development Goals (SDGs) of the 2030 Agenda. Therefore, it aims at greater and institutionalised communication and coordination between secular and non-secular actors, while fostering new synergies through cooperation among its members and partners. In addition, PaRD promotes synergies with existing networks and initiatives to contribute toward a more coherent and effective international agenda on religion and development.