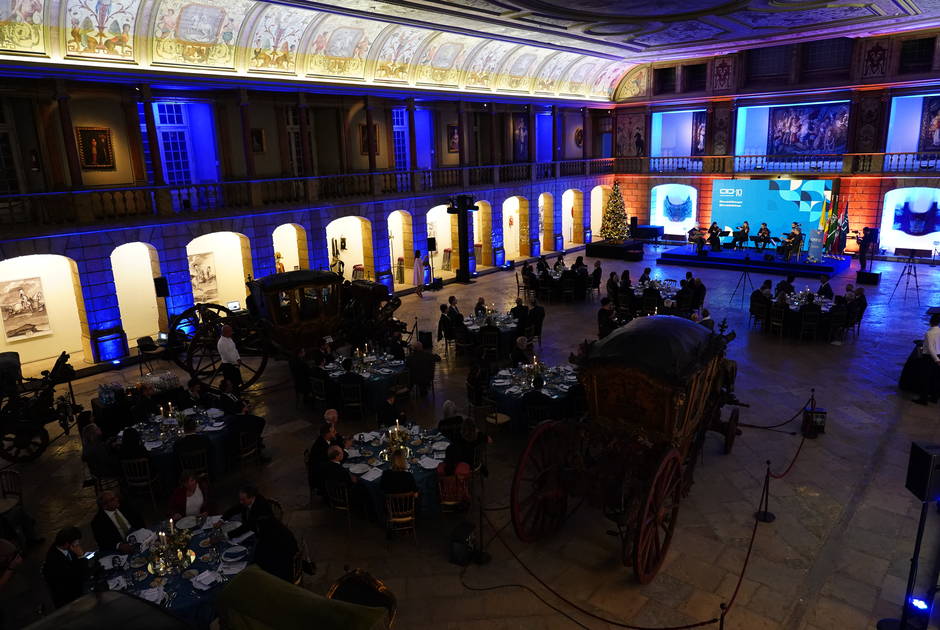 The International Dialogue Centre, KAICIID, is celebrating 10 years of existence promoting interreligious and intercultural dialogue around the world. With a unique governance model, run by religious representatives from different faiths and cultures, the intergovernmental organization starts a new cycle of its existence from Lisbon, which hosts the KAICIID headquarters since July 2022.

The highlights of the 10th anniversary celebrations took place on Tuesday, 6 December, with a meeting of the Secretary-General of KAICIID, Zuhair Altharthi, with the President of the Republic of Portugal, Marcelo Rebelo de Sousa, to formally welcome the Centre to Lisbon, and a gala dinner, at the National Coach Museum, which brought together guests from civil society, religious leaders, diplomatic representatives and policymakers, and which included welcome remarks by the Minister of Foreign Affairs, João Gomes Cravinho.

For the Secretary General of KAICIID, Zuhair Altharthi, the intergovernmental organization look forward “to an enduring partnership with the local community here in Lisbon as we continue to advance our work towards creating opportunities for dialogue and understanding between religious leaders and policy makers as a means toward achieving lasting peace in our world today,” said Zuhair Altharthi.

Founded in 2012, KAICIID is a unique intergovernmental organisation with a dual governance structure, consisting of a Council of Parties, made up of Member States - Austria, Spain, Saudi Arabia and the Holy See as founding observer - and a Board of Directors composed of representatives from various religions (including Buddhism, Christianity, Hinduism, Islam and Judaism). It also has a Consultative Forum, with over 60 religious’ leaders from the world's main religious and cultural traditions, which enables it to network communities from all over the world.

Acting both as convenor and facilitator, KAICIID seeks to bring religious leaders, policymakers and experts to the dialogue table, seeking to contribute to finding common solutions to shared problems and global challenges. In addition, KAICIID is active with religious communities, equipping with knowledge and skills about policy frameworks, human rights and sustainable development, while training policymakers on religious literacy, interreligious dialogue and inclusion.

Initiatives developed by KAICIID include the KAICIID Fellows Programme, which aims to empower and network leaders committed to promoting peace in their communities, and the European Forum for Policy Dialogue, which annually brings together religious leaders, policy-makers and experts in a major discussion forum. The intergovernmental organisation promotes throughout the year several trainings, in person and online, aimed at promoting dialogue, empowering the most vulnerable communities and combating hate speech the misuse of religion as a justification for violence and persecution.

“KAICIID believes the unifying power of dialogue is needed more than ever. Our unique mandate and interreligious dialogue, and the expertise of our multireligious Board of Directors give us the global authority to bring the best and the brightest religious actors and institutions together in order to foster peace across the globe”, says the Secretary General of KAICIID, Zuhair Altharthi.

“KAICIID is the only intergovernmental organization mandated in dialogue with the governing body, which includes policymakers and representatives from the major world religious. This give us the trust and the authority needed to equip the international community with the tools to break down divisions and drive forward on global development agendas”, says the Deputy Secretary General of KAICIID, António de Almeida-Ribeiro.

The impact of KAICIID's work over this decade is visible in the following metrics:

- Over 400 fellows trained from 85 different countries;

- 5 dialogue platforms established around the world

- 13 cooperation agreements made with international organisations

The relevance of the activity developed by KAICIID is recognised by the most relevant international institutions. Among the partners of the intergovernmental organisation are the African Union, the Association of Southeast Asian Nations (ASEAN), the European Union, the United Nations Alliance of Civilisations and UNESCO.