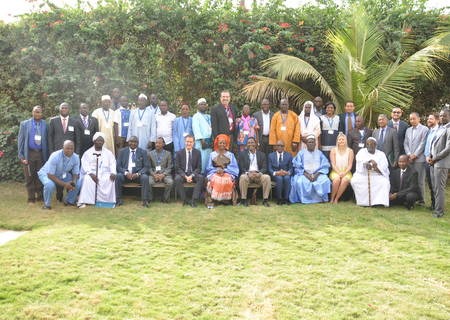 Participants at a conference on strengthening the implementation of the peace accords in the Central African Republic called on the international community to do more to strengthen the role of religious leaders in peace and reconciliation in the country.  The conference, which was held in Dakar, Senegal from 8-11 December, was organized by the International Dialogue Centre (KAICIID), the Network for Religious and Traditional Peacemakers and the Organization for Islamic Cooperation

The conflict in the Central African Republic has claimed thousands of lives, and forcibly displaced over 1.1 million people in one of the worst humanitarian disasters of our time.

Although there have been numerous peace accords concluded between the various parties to the conflict in the Central African Republic, efforts to implement them effectively have been weakened and delayed by several factors. The organizers of the conference identified several challenges in this regard, including the weak involvement of religious and community leaders in the process. Incitement to and justification of violence on religious or ethnic grounds, through the media and other channels is a continuing challenge. Members of the media, armed forces and public administration, particularly at the local level, are insufficiently trained on dialogue approaches and on how to deal with issues relating to religious or ethnic diversity.

The participants at the conference, who included more than twenty religious leaders from both the Muslim and Christian communities in the Central African Republic discussed how these challenges could best be overcome, and how they could contribute to the implementation of the existing peace agreements in the country. The event was supported by the government of the Central African Republic, and was attended by Minister for Humanitarian Affairs and National Reconciliation a Special Advisor to the President, as well as representatives of the UN Peacekeeping Mission MINUSCA and other key international partners involved in peace efforts in the country.

“Those who wish to profit from the violence have manipulated religious identify and created divisions among religious communities who had previously lived peacefully side by side. Religious leaders are often the first to see warning signs of violence in their communities, and to be able to serve as examples of interreligious cooperation. The religious leaders of the Central African Republic, particularly at the local level, should be empowered and supported in their efforts to contribute to the implementation of the country’s peace accords,” said KAICIID Deputy Secretary General Alvaro Albacete.

"Religious actors and leaders are a critical component in peace processes, but unfortunately their significant assets remain underutilized. Therefore, this Dakar consultation is of utmost importance for the peace-building efforts in the Central African Republic. The consultation has been able to identify a clear role for the religious leaders of CAR and will directly strengthen their role in supporting the peace accords. Together with our partners, the Peacemakers Network will continue supporting the positive role of these actors in building peace. We stand committed to strengthening the efforts of these actors as they reach out to their communities and implement the roadmap bringing sustainable peace closer step-by-step," said the director of the Washington DC office of the Peacemakers Network Dr. Mohamed Elsanousi.

“Since the beginning of crisis, the OIC has continued to play an assisting role by supporting the path of dialogue to achieve national reconciliation in CAR. Several actions have been undertaken on the ground to bring the conflicting parties closer together. Through its special envoy and in collaboration with neighboring countries, the OIC has constantly maintained a multifaceted role in the search of the peace in the CAR” said Bashir Ansari Director of Dialogue and Outreach Department at the Organization of Islamic Cooperation.

The result of the roundtable was a concrete Action Plan outlining the way in which CAR’s religious leaders can promote and support the implementation of specific elements of the various peace accords, signed since the outbreak of the crisis in 2013.

The Central African Republic (CAR) has undergone a surge of violence since in March 2013. With up to 1.1 million people forcefully displaced since then, the crisis has become one of the worst humanitarian disasters of our time. There are more than 500.000 CAR refugees in neighboring countries and 600.000 are internally displaced. Intra-religious and inter-religious division affects the stability of the country, causing clashes between and within the different religious communities and ethnic communities and weakening reconciliation potential.

Most citizens self-identify as deeply religious, with 96 percent of the country’s population identifying with at least one of the three major faiths (Protestantism, Catholicism and Islam), and so religious identity must be at the heart of efforts to rebuild common citizenship and build social cohesion.

About the organizing partners:

The Network for Religious and Traditional Peacemakers improves the effectiveness of peacemaking and peacebuilding by supporting and strengthening the positive role of religious and traditional actors in peace processes. By the end of 2017 the Peacemakers Network consisted of 50 members and partners ranging from grassroots religious and traditional actors to international NGOs, academic institutes, and states. During the past years, the collaborative work of the Network has supported peace efforts in South and Southeast Asia, Libya, Central African Republic, Somalia, Kenya, Nigeria, and Finland.

The Organisation of Islamic Cooperation is the second largest inter-governmental organization after the United Nations and represents the collective voice of the Muslim world and ensuring to safeguard and protect the interests of the Muslim world in the spirit of promoting international peace and harmony among various people of the world.