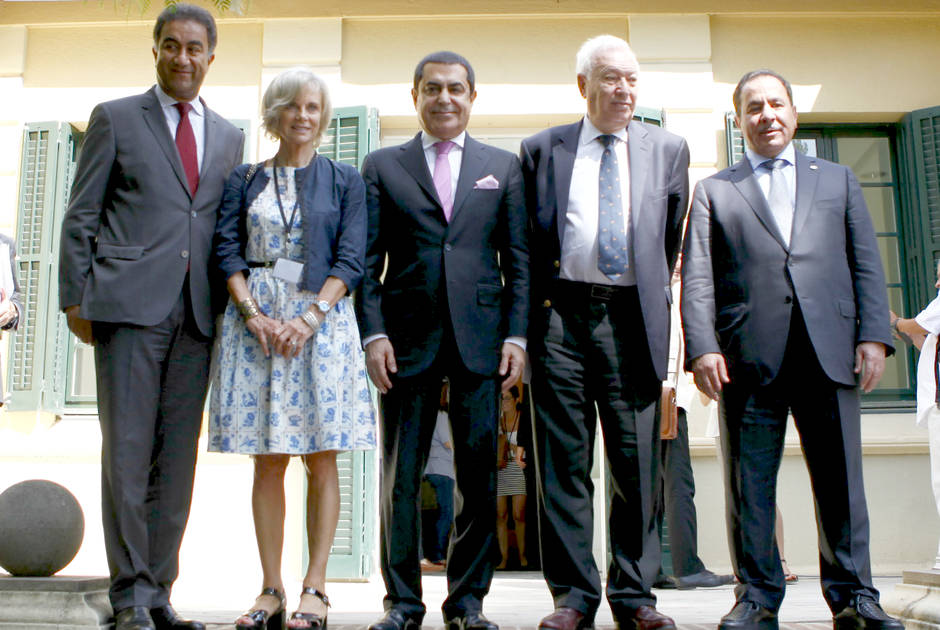 Barcelona, 23 July 2015. Intercultural and interreligious dialogue can be a powerful tool for achieving stability and peace, combating intolerance and extremism and upholding the values of peaceful coexistence and mutual understanding. That was the premise that brought 80 representatives from institutions for intercultural dialogue and cooperation, interfaith organisations, religious authorities and prominent public figures together to discuss intercultural and interreligious dialogue, a meeting that took place on 22-23 July at the Barcelona headquarters of the Union for the Mediterranean.

The conference was organised at the suggestion of the Spanish Minister for Foreign Affairs and Cooperation, José Manuel García-Margallo, and in partnership with the Union for the Mediterranean (UfM), the King Abdullah Bin Abdulaziz International Centre for Interreligious and Intercultural Dialogue (KAICIID), the UN Alliance of Civilizations (UNAoC), the Anna Lindh Foundation (ALF) and the European Union (EU).

The meeting falls within the framework of the 20th anniversary of the Barcelona Process – the ongoing consultation for the European Neighbourhood Policy (ENP) review – and responds to a broad consensus on the growing significance of intercultural and interreligious dialogue in the Euro-Mediterranean region.

Following discussions held during the meeting, partner institutions approved a conclusion document where they identified the need to record successful examples of intercultural and interreligious dialogue. They also acknowledged that the main challenge was rolling out existing initiatives. Actions and programmes were identified for implementation in three different spheres: education, media and youth. Based on this exercise and discussions during the meeting, they committed to establishing a network of institutions and focal points, enhancing mechanism coordination for institutions actively involved in intercultural dialogue and setting out a roadmap for future activities based on a common agenda and calendar of initiatives for the coming years. The roadmap created includes an action plan of activities by the various institutions.

José Manuel García-Margallo, the Spanish Minister of Foreign Affairs and Cooperation, said that “States and the institutions they create must consider ways to improve efficacy, taking into account their complementary methods and synergies in the best possible way. No State or institution can achieve the goals needed, in the time needed, by working in isolation”. He added that “enhancing the role of intercultural and interreligious dialogue as a tool for the prevention and resolution of conflicts and mediation will make a difference to institutional performance. It is imperative that we move away from a culture of reaction to a culture of prevention”.

“Challenges in the region, such as terrorism, extremist trends and the humanitarian tragedy of immigration in the Mediterranean, confirm the need for greater collective action and a more comprehensive approach. Reinforcing intercultural and interreligious dialogue, strengthening regional integration and restoring harmony in civil society are now more important than ever if we are to create a common space for solidarity and stability in the Euro-Mediterranean region”, said Fathallah Sijilmassi, Secretary General of the UfM.

In the Northern and southern Mediterranean, young men and women are often the first victims of unemployment, social instability and extremist trends, but they are also untapped assets in terms of promoting intercultural dialogue. The participants discussed how women and young people can play a more central role in working with institutions to link political cooperation policies with the wider society.

"As the EU and its partners in the South work to recalibrate their relationships, we are calling today for a new approach to 'culture-centric' relations and a comprehensive intercultural dialogue strategy for the Mediterranean. The Anna Lindh Foundation and its Network of more than 4,000 civil society stakeholders is ready to play its role in ensuring this strategy is built from the ground up to empower the region's young women and men to act as central dialogue actors to counter the extremist narrative and 'clash of ignorance', said Elisabeth Guigou, President of the Anna Lindh Foundation.

Faisal Bin Abdulrahman Bin Muaammar, Secretary General of KAICIID, concluded that, in a bid to raise awareness of the importance of interreligious and intercultural dialogue, the institutions had begun to set up an action plan for future activities for the network. These activities are based on a common agenda and calendar of activities to complement the major initiatives planned over the coming years.

“Rooting out radicalisation and violent extremism can be achieved through intercultural and interreligious dialogue, but also through a more practical and proactive approach, such as building trust among different communities and fostering cooperation and long-term transnational partnerships that take into account our common interest for peace and security”, said Nassir Abdulaziz Al-Nasser, High Representative of the UNAoC.

This two-day high-level meeting provided an opportunity for the establishment of a network of the main institutions and organisations involved in intercultural and interreligious dialogue order to highlight the need for a positive and collaborative approach towards mutual understanding. This is the first meeting in a long-term action-oriented process that aims to strengthen organisational capacity and foster cooperation as a means of countering discrimination and intolerance.