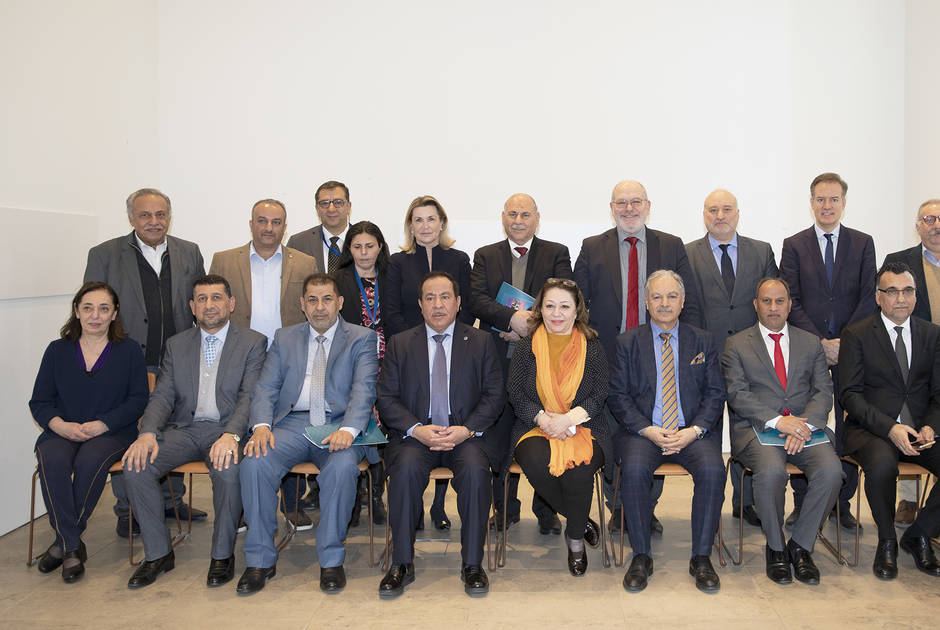 The delegation, which visited the Centre’s Vienna headquarters on Thursday, 28 February 2019, included Iraqi nationals coming from Iraq and from across Europe to get to know the Centre and its programmes as well as to explore collaboration opportunities in the country.

The delegation was particularly interested in the Centre’s efforts in Iraq under the KAICIID established Platform for Dialogue and Cooperation in the Arab World, which was launched with the support of 23 prominent Christian and Muslim Arab religious leaders in Vienna at a KAICIID organized conference on “Interreligious Dialogue for Peace: Promoting Peaceful Coexistence and Common Citizenship.”

Participants also discussed the role that Iraqi policymakers can play in furthering the development of KAICIID projects under the platform. These include the formation of a National Team for Common Citizenship in Iraq, which advocates for equal rights in the nation, as well as the efforts of the Network of Faculties and Institutes in the Arab World, which is currently working on the development of an interreligious dialogue curriculum that is foreseen to be integrated into existing education curricula in the region.

KAICIID SG Bin Muaammar stated that through its work in the region, and more specifically in Iraq, KAICIID seeks with its partners to rebuild what has been destroyed by extremists like ISIS, and to further protect their communities from violent rhetoric and actions.

“We consider this visit to be a very important milestone in our cooperation with our stakeholders in Iraq, and we are looking forward to a fruitful collaboration with concrete actions that can translate into desired results, namely bridging the gap in cooperation between religious leaders and communities with policymakers in Iraq for the sake of common citizenship and peaceful coexistence,” Muaammar said.

He went on to say: “There are certain values that need to be brought back to the dialogue and implementation table, and it is important to note that not only rules and regulations serve to secure these values… the Arab region is rich in values, but what is needed is education from a young age and also honesty about the fact that we have at times neglected rules and regulations as well as rights and responsibilities.”

He concluded: “KAICIID has been successful in making itself unique from the aspect that it is the only Centre in the world that has been able to bridge the cooperation gap between religious leaders and communities, and policymakers through its work around the world.”