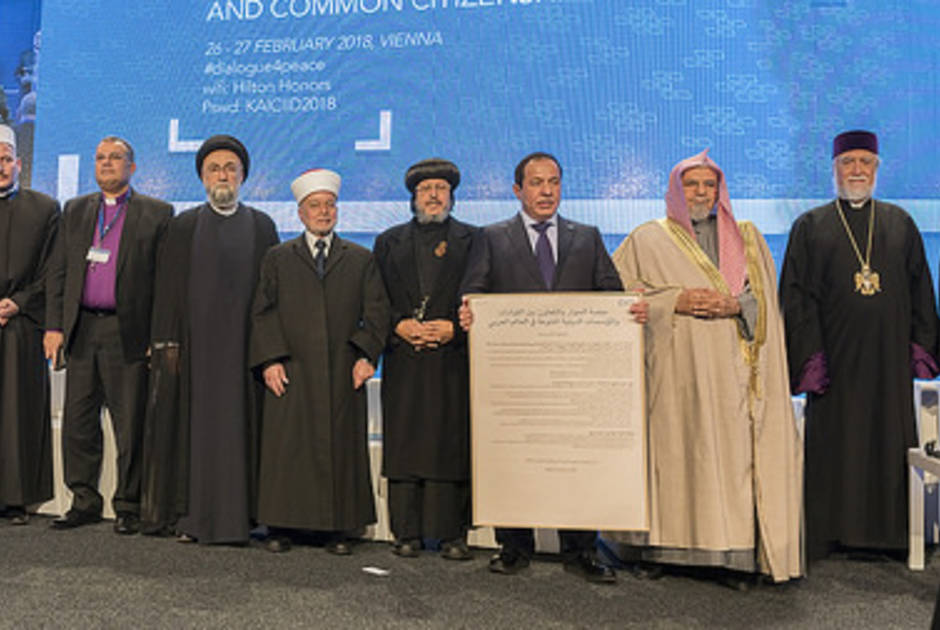 At a conference organized by the Vienna-based International Dialogue Centre (KAICIID) today, leading representatives of Muslim, Christian, Jewish and other religious communities worldwide spoke up in one voice for social cohesion, peaceful coexistence and respect for religious diversity.

Opening the two-day conference, which launched a pioneering platform for interreligious dialogue and cooperation in the Arab region, KAICIID Secretary General Faisal Bin Muaammar said: “The unity of purpose between Christians and Muslims on vital issues, such as common citizenship cannot be ignored. Unity among religious leaders is the strongest message of hope the region has seen in many years.”

Titled “Interreligious Dialogue for Peace: Promoting Peaceful Coexistence and Common Citizenship”, the conference coincided with the Centre’s fifth year in operation. Participants were informed about the programmes and initiatives that the Centre has completed since its foundation, including the Fellows programme, a training programme for mid-career religious educators, and the Centre’s youth initiatives, which include an ambitious programme to train religious leaders on the promotion of dialogue on social media. The Centre works with representatives of five major world religions, and has implemented programmes in Nigeria, the Central African Republic, the Arab region, Myanmar, and Europe, working with a wide range of international partners which include religious institutions, intergovernmental organizations such as the European Commission and the United Nations, and civil society.

The journey to this conference began with a 2014 initiative called “United Against Violence in the Name of Religion”, which sought to unite religious leaders against the extremist rhetoric and brutal violence of the so-called ISIS.  At this meeting, religious leaders highlighted the need to promote dialogue through religious education, social media, and training for community leaders. In response, KAICIID launched corresponding initiatives in the Arab region, which have resulted in a training manual for religious leaders on social media and dialogue, the first-ever network connecting Christian and Muslim religious education institutions, and an Arab-region focus for the Fellows programme. In addition, KAICIID has been working with international partners such as the United Nations Development Programme (UNDP) to connect religious leaders with policymakers on issues of shared concern.

At the opening ceremony, Bin Muaammar reminded the participants of the powerful role that religious leaders can play in mobilizing communities: “Since its inception, KAICIID has taken a leading role in advocating for religious leaders and political leaders to work hand in hand to find common solutions to the challenge of violent extremism. Today, policymakers have heard us. They recognize the reality that promoting coexistence and fostering the values of common citizenship can only be achieved when religious leaders are equal stakeholders in the process.”

Support for KAICIID’s mission to promote interreligious and intercultural dialogue also came from the representatives of the Centre’s Council of Parties, Dr. Michael Linhart, Secretary-General for Foreign Affairs, Republic of Austria, Dr. Nizar Madani, State Minister for Foreign Affairs of the Kingdom of Saudi Arabia, and Amb. Belén Alfaro, Ambassador at large for the Alliance of Civilization and the Interreligious Dialogue, Kingdom of Spain.  KAICIID Board Member Bishop Miguel Ayuso, delivered a speech on behalf of Cardinal Jean-Louis Tauran President of the Pontifical Council for Inter-religious Dialogue.

Over the next two days, the gathered religious leaders, policymakers and experts participated in a series of dialogues on topics such as the role of religious leaders & policymakers in promoting social cohesion & common citizenship, global partnerships for dialogue and promoting social cohesion, interreligious education & common citizenship values, and social media as a space for dialogue. The participants included leading figures in interreligious dialogue, experts and policymakers.

At the conclusion of the conference, participants presented their recommendations for the Centre, and its partners. These recommendations were grouped thematically under the topics of social media, social cohesion and interreligious education.

Some highlights from the working group discussions:

“All theological institutions should be either encouraged or show their interest in interreligious education and common citizenship. They should develop a religious discourse based on peace, coexistence and social cohesion.”

“When seeking to promote dialogue on social media, we need to focus on building bridges and breaking the walls between communities through compassion and peaceful communication.”

“Religious leaders and policymakers should actively promote the involvement of women, as well as ethnic minorities, in dialogue initiatives.”

The closing remarks at the conference were delivered by the Centre’s Board of Directors, who include leading voices from five world religions:

Dr. Hamad Al-Majed thanked the Centre for its work promoting interreligious dialogue: “I have seen firsthand the impact that KAICIID’s work has in promoting a culture of dialogue in our times.”

Dr. Kezevino Aram, Director, Shanti Ashram said: “Those of us who are gathered here are convinced that dialogue must continue, but we must still convince our brothers and sisters of the actual impact of this dialogue. Conflicts have increased, but the desire and the hunger for peace is also expanding.”

Bishop Miguel Ayuso, Secretary of the Pontifical Council for Inter-religious Dialogue said: “How necessary Peace and Reconciliation are in our days and in our world, so in need of promoting a “culture of dialogue”, a “culture of inclusivism respectful of every human person, so as together to promote a solidarity directed towards the common good. The immense movements of refugees and migrants fleeing the horror of war shall find us united in compassion and aware of the urgency to address the present challenges.”

Metropolitan Emmanuel, Exarch of the Ecumenical Patriarchate of Constantinople, said: “As a representative of the Orthodox Church, I would like to repeat the words that His Holiness (Patriarch Bartholomew) mentioned in his address: we must have love, not only to our friends but also to our enemies, which is more difficult. And this is the basis of dialogue that is sincere, dialogue, and continuous. And this is what KAICIID has been doing.”

Reverend Kosho Niwano, President-Designate Rissho Kosei-kai, said: “The importance of partnership between religious and political leaders has been firmly confirmed at this meeting. This partnership will have to be promoted at local, national and global levels. In so doing, I believe the most powerful tool is a methodology of dialogue. There are some forms of dialogue, namely, face to face dialogue, dialogue through media, as well as dialogue through social media.”

Sheikh Ul-Islam Allahshukur Pashazade said:  “Indeed, the maintenance and preservation of peace which is above all today`s problems, requires close co-operation of state leaders, public figures and religious leaders.”

Reverend Mark Poulson, Secretary for Inter Religious Affairs to the Archbishop of Canterbury and National Inter Religious Affairs Adviser for the Church of England said: “Platforms and the building of them involves preparation and care, and they are only effective if they are locally relevant. We need to be intentional and look beyond the ceremonial. Platforms need to be authentic and rooted in practice.”
Rabbi Rosen, International Director of Interreligious Affairs, American Jewish Committee, addressed the participants: “Prejudice and bigotry are nurtured by ignorance and alienation. That is why this gathering is so important. That is why sincere Interreligious Dialogue does promote peace. And that is why we who have the privilege to lead KAICIID are so grateful for your presence and commitment to this path.”

The final speaker Dr. Mohammad Sammak said: “We in KAICIID believe that dialogue is a noble humanitarian mission. We are realistic. We know very well that we cannot do it alone. No organization can do it alone. This is a collective human effort. This is why we in KAICIID believe that our Centre is a hub. An international hub for all organizations which share this culture of bridge-building.”