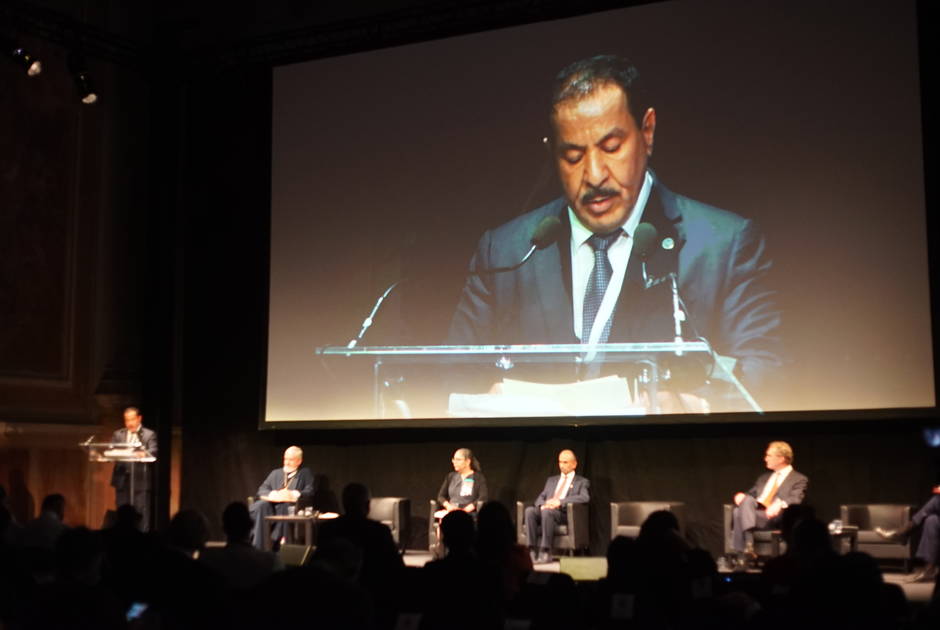 Hundreds of high-ranking political, diplomatic, academic and religious leaders gathered this week at the G20 Interfaith Forum in Bologna to discuss interfaith solutions to global challenges including the COVID-19 pandemic, poverty, migration, conflict and climate change.

Held from September 12-14, the Interfaith Forum was organised by the G20 Interfaith Association and Fondazione per le Scienze Religiose (FSCIRE), with the contribution of the Italian Foreign Ministry, KAICIID, and others. KAICIID has been closely involved with the Interfaith Forum since 2017, providing support for past summits in Germany, Japan and Argentina. The Centre was also a key organiser of the 2020 Forum in Riyadh, Saudi Arabia.

According to bin Muaammar, faith communities need to improve partnerships with policymakers to better inform the global development agendas of leading international fora, such as the G20 Leaders’ Summit.

“Too often the religious world is willing to approach policymakers, but without the technically sound and evidence-based narrative necessary for sound dialogue,” bin Muaammar said. “Conversely, I hear from many from the world of faith that policymakers need to ‘learn the language of religion.’”

Through its programme of work and participation in events such as the Interfaith Forum, KAICIID has worked to equip religious leaders with policy skills, while simultaneously fostering dialogues with policymakers to help them better understand the concerns and contributions of faith communities.

These efforts have been particularly focused in the Arab Region, where conflict and crisis are often intertwined with religious beliefs.

KAICIID hosted two panels during the Interfaith Forum on the Arab Region, inviting local partners to share their experiences with early warning and early response and offer best practices for conflict prevention and resolution.

Opening the panel on “The Role of Religious Leaders in Responding to Crises in the Arab Region,” bin Muaammar referenced the work of the KAICIID-supported Interreligious Platform for Dialogue and Cooperation (IPDC) which equips religious leaders to combat hate speech and work with local and national authorities on policy which promotes social cohesion and equal rights.

According to Pshtiwan Sadeq Abdullah, Minster of Religious Affairs in Kurdistan region of Iraq, the rich diversity of religions and cultures within the Arab Region is why faith leaders still enjoy immense authority in their communities, in contrast to the west where religious influence has waned.

“We have realized that the role of religious leaders, faith-based institutions, and organizations is vital in directing people and the authorities to make changes without resorting to the use of violence,” Abdullah said.

To properly foster social cohesion, however, Dr. Nayla Tabbara, President of Adyan Foundation, says religious leaders need improved training on political literacy – understanding how to work with policymakers on social issues – and religious literacy – understanding other faiths in order to diffuse communal tensions and embrace diversity. “We need to ask ourselves. How can we be less hegemonic and more in service to people?”

His Holiness Aram I Keshishian, The Patriarch of The Catholic sate of the Great House of Cilicia, emphasized that dialogue among diverse religions can contribute to the establishment of peace in the Middle East. “Currently the world is facing immense polarization, and is experiencing tensions and other crisis,” he said, calling for increased mutual understanding, dialogue and cooperation which are “enshrined in moral values and human rights.”

Monica Tawdros, a youth activist from Egypt, shared her project which included an online course for religious leaders on promoting solidarity and peaceful coexistence during COVID-19. Through the project, both Muslim and Christian leaders were invited to film awareness raising videos and implement initiatives which would combat stigma for victims of the virus.

Marcel Moosa, lawyer and human rights activist from Syria, launched the “Stay at Home” campaign which amplified messages from religious leaders calling for adherence to health and safety regulations during the pandemic. Additionally, Moosa brought together religious leaders, policymakers, faith-based and civil society organizations to discuss their shared role in protecting vulnerable and marginalised communities from hate speech and other forms of attack.

Moosa believes young people have incredible potential to support governments and NGOs with development work, assuming they are provided with adequate training and resources.

“The most important resource that young people need is an organization that realizes their ideas and believes in their capabilities,” Moussa said. “And they also should be supported and sponsored by governments to become part of finding a solution.”

Young activist Muath bin Nujayfan of Saudi Arabia agrees, having shared his efforts during the panel to combat hate speech which is often a precursor of incitement to violence and atrocity crimes.

“In order to move forward as nations, we must stand together against hate speech,” bin Nujayfan said. “There’s nobody better than the current generation to do that. They have the power, the energy to create the change we want and the world we want.”

Recommendations from the G20 Interfaith Forum panels will be shared at the G20 Leaders’ Summit.