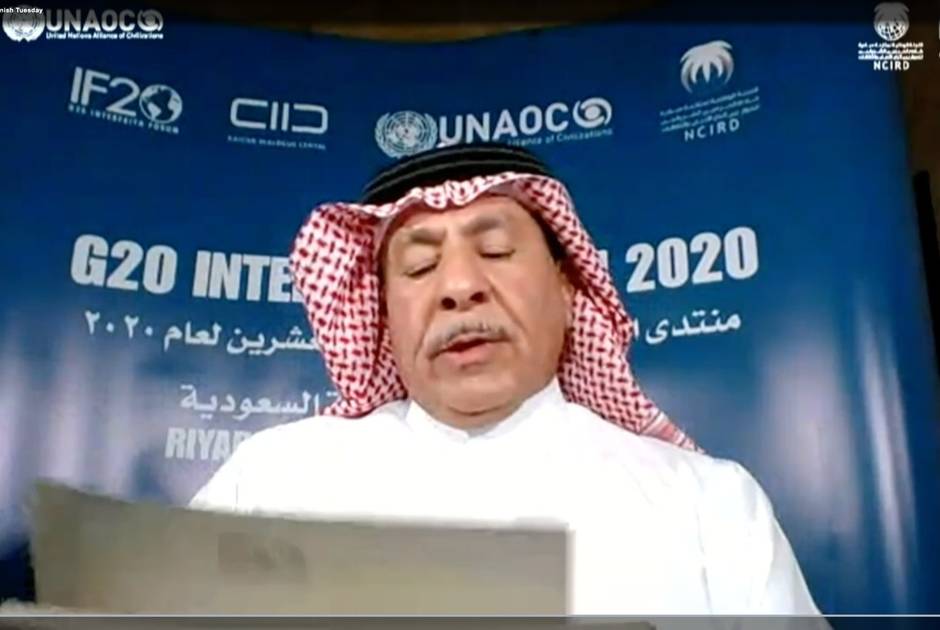 It is a great personal pleasure for me, a citizen of Saudi Arabia, to speak here in Riyadh, at the beginning of this historic G20 Interfaith Forum, to be streamed virtually across the world over the next five days.

The COVID-19 pandemic has taken away our capacity for physical engagement, but through the magic of digital communications, we have managed to bring together well over one thousand dignitaries, speakers, religious leaders and experts, policymakers and participants.

Their task? To debate and shape the outcomes of an unprecedented series of regional consultations on some of the most challenging issues facing mankind so that they may be presented to the approaching gathering of G20 world leaders hosted this year by the Kingdom of Saudi Arabia.

KAICIID is an Intergovernmental Organisation, supported by a multi religious Board of Directors and Advisory Forum, with programmes and partnerships throughout the world.

And it has enjoyed a specific and fruitful relationship with the Kingdom of Saudi Arabia.

The Kingdom is one of KAICIID’s Council of Parties, alongside Spain and Austria with the Holy See as Founding Observer Member.

The Centre was born from an initiative by the Kingdom of Saudi Arabia, on behalf of the Islamic World, to reach out to other faiths in pursuit of transnational intercultural and interreligious dialogue.

Indeed, we are no stranger to the Arab Region.  KAICIID’s programmes in this region, from the establishment of the Interreligious Platform for Dialogue and Cooperation in the Arab World, to our efforts to secure protection of religious minorities, prevent hate speech and support the principle of common citizenship, have been active since our founding in 2012.

KAICIID is grateful to Saudi Arabia for its steadfast support and extends heartfelt congratulations and good wishes to the Custodian of the Two Holy Mosques, King Salman bin Abdulaziz, and His Royal Highness Prince Mohammed bin Salman, on the occasion of the Kingdom’s hosting of the G20.

KAICIID is also grateful to its partners, the United Nations Alliance of Civilisations, the G20 Interfaith Association and Saudi Arabia’s National Committee for Interfaith and Intercultural Dialogue, for their expertise, commitment and unfailing support throughout the consultation period and for making this event possible.

The story of this G20 Interfaith Forum does not begin tonight and end in five days’ time however.

The story began in July, with the first consultation between religious leaders, faith-based experts and policy makers in the Arab Region.

The “Road to Riyadh”, as I call it, has wound its way through Asia, Africa, North America, Latin America, Europe and the Middle East in a series of unprecedented consultations on some of the most pressing challenges in the field of human development.

This process has been achieved despite the multiple challenges of the COVID-19 pandemic – a horrible modern day global scourge which has featured strongly in regional consultations and which form a key part of this Forum’s agenda.

Though virtual, these consultations have not lacked passion, urgency or direction.

We have heard powerful testimony on themes being considered by this Forum – on the effects of climate change, gender inequality, economic imbalance and poor governance.

We have heard also, and will consider here, the central role religious leaders from different faiths, united by common principles of tolerance and peace, have to play in shaping the destiny of the human family.

Each regional consultation brings to Riyadh today a series of recommendations, within the framework of the UN’s Sustainable Development Goals, which testify to the relevance of religion, religious leaders and faith-based organisations to the wider narrative of human development.

Since its founding in 2012, KAICIID has used a twin track approach to its mission.  The Centre’s programmatic activities, in some of the most troubled and divided global societies – in the Arab Region, Nigeria, Central African Republic and Myanmar – have helped establish grass roots consensus across religious and cultural boundaries.

These programmes have given the Centre relevance in policy making circles, especially with United Nations agencies working to secure religious freedom, the protection of worship and holy sites and the eradication of hate speech.

KAICIID participated in consultations leading to the United Nations Plan of Action to Prevent and Counter Incitement to Violence that Could Lead to Atrocity Crimes in 2017.  In 2019 the Centre contributed to the Plan of Action to Safeguard Religious Sites launched by our partners here, the United Nations Alliance of Civilisations, and in that same year became a member of UNAOC’s Group of Friends.

KAICIID’s contributions at policy making level cannot be separated from the fact that they arise from concrete interventions in real situations – be it in training youth in the Arab Region in the responsible use of social media, or in the hundreds of initiatives towards reconciliation and peacebuilding enacted by our trained global network of Fellows.

The KAICIID Fellows Programme brings together leaders and educators from Buddhist, Christian, Hindu, Jewish, Muslim and other religious backgrounds for training in dialogue facilitation, intercultural communication and the promotion of social cohesion.  To date, 370 Fellows from 60 countries have graduated, and returned to their homes more empowered as peacebuilders and reconcilers.

KAICIID has been successful in bringing the voice of faith-based organisations and religious leaders to the collective fight against COVID-19.  For instance in the Arab Region, the Centre recently announced support for a host of initiatives aimed at fighting the negative effects of this terrible virus on social cohesion and wellbeing.

Faith-based organisations are deeply rooted in the process of global development.  Together they possess significant resources and are leaders in the field of education.  For over 80 per cent of the global population, life is lived through the filter of one belief system or another.

In many parts of the world, where systems of governance, security and poverty relief do not exist or have broken down, it is the religious leader or faith-based organisation that stands for community cohesion and wellbeing.

The “Road to Riyadh” – the process of consultations that have brought us to this point – testifies to the need for ever stronger representation of religious leaders and organisations within the global policymaking context.

This consultation process, and what follows over the next days, will bring together inputs that should be inserted into global policy making fora such as the approaching G20.

For this reason, I ask that full consideration be given to the inclusion of the G20 Interfaith Forum as an official engagement group of the G20 itself.