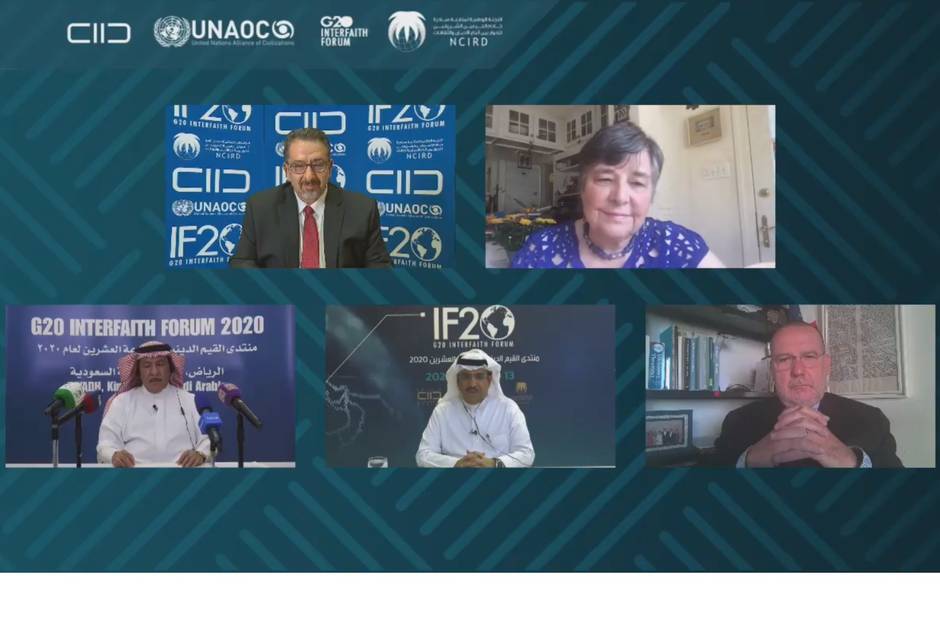 The capacity of interfaith dialogue to unite disparate traditions under a common cause, the importance of offering a voice to the voiceless, and the critical role of faith groups in disaster risk reduction were key talking points at the concluding plenaries of the 2020 G20 Interfaith Forum on October 17.

During the closing session of the virtual conference, KAICIID Secretary General H.E. Faisal bin Muaammar heralded the Forum as the “most successful event” he had ever attended; one that, at a time of great global suffering, had provided a platform for those not often represented on the global stage, and that had underscored the vital role played by faith-based organizations.

“Over the past five days, we have seen evidence from all corners of the world that religious leaders are instrumental in building a better world,” he said.

“Religious communities are promoting strong, inclusive, green, sustainable economies, based on sharing and collaboration. They can be instrumental in educating for equality, inclusion and respect. They can advocate for considering the impact of actions on others,” bin Muaammar added.

Across dozens of plenary sessions and panel discussions, the Forum heard from scores of faith leaders, academic experts, and policymakers, each sharing their thoughts on the most pressing global issues: poverty, hunger, inequality, the COVID-19 pandemic and climate change.

In the coming weeks, their findings will be distilled down to a number of core policy recommendations - including the need to involve faith leaders in the decision making process - which will then be presented to world leaders at November's G20 Summit hosted by Saudi Arabia.

“We are all stakeholders in the international system and we are planning for the success of this historical G20 Leaders’ Summit by building a resilient and long-lasting recovery, ensuring that it tackles inequality and promotes sustainability.”

With these goals aligning closely with those of the G20 Interfaith Forum, conference organizers strongly recommended the formal recognition of the religious platform as an official engagement group in future G20 Summits. According to Dr. Abdullah Alhomaid, Secretary General of the National Committee for Interfaith and Intercultural Dialogue (NCIRD) in the Kingdom of Saudi Arabia, this should be possible.

“It has been emphasised during the last five days that the strength of religious leaders and institutions comes from their work at the grassroots levels. This is true,” he said.

“However, in order for such localised knowledge and experiences to capture the attention of the policymakers, they have to be articulated in a way that makes the recommendations of this Forum more politically relevant, but without losing their moral and spiritual grounds,” Dr. Alhomaid added during the Forum’s closing plenary session.

Throwing ahead to next year’s G20 Interfaith Forum - which will be held in Bologna, Italy - the final day of the conference also heard from Prof. Alberto Melloni, Professor and UNESCO Chair in Religious Pluralism and Peace at the University of Bologna.

“The G20 is a Forum which opens a discussion on the Sustainable Development Goals and the human goals of our planet,” he said.

“But the Interfaith Forum is also a way to give a voice to the voiceless and to speak for other brothers and sisters who are not in the G20: thousands of cultures and countries which have the same hope for peace,” Prof. Melloni added - a point brought home by the more than 2,000 participants from 90 countries who joined this week’s virtual gathering.

In the conference’s penultimate plenary session - also held yesterday – discussions shifted to how faith institutions can best react when crisis engulfs their communities.

Taking the COVID-19 pandemic as an example, His Holiness Catholicos Aram I Keshishian, Patriarch of the Catholicosate of the Great House of Cilicia, outlined how religious groups are often better equipped to respond than state authorities.

“According to estimates, the response to the coronavirus pandemic was, for many reasons, generally disorganised, incoherent, and insufficient, both nationally and globally,” Keshishian said.

“If the medical response was slow, and the response from politicians rather ambiguous, the response from faith communities was spontaneous and to a large degree well organized,” he added, noting the incredible breadth of emergency relief schemes arranged by religious institutions.

The Church of Jesus Christ of Latter-day Saints - represented on the panel by Sister Sharon Eubank – was one such group to address the urgent challenges posed by COVID-19. As supply chains buckled under the weight of rampant panic buying, charities associated with the Church began purchasing raw products directly from source, then shipped them across America to those most in need.

Surplus potatoes were dehydrated to allow for nationwide delivery, while milk was turned into cheese and donated to food banks. As Sister Sharon put it, “the old network was creative, the new partnerships were nimble, and it worked.”

Referencing his group’s work in the Democratic Republic of Congo (DRC), Morley shared how local Christian and Muslim leaders were instrumental in dispelling fears around contagion containment measures. “Many people thought that they could catch Ebola or COVID-19 from thermometers,” he said.

According to Morley, digital forehead thermometers were also triggering for individuals who had been victims of violent conflict. “One pastor told me that only after he’d stood in front of his congregation with a temperature reading ‘gun’ pointed at his head, did his congregation allow for their temperatures to be taken as they walked into the mosque,” he added.

The idea that faith communities’ unique local knowledge must be respected - and, indeed, utilised - during crises was touched on also by Fadlullah Wilmot, Muslim Aid’s regional program manager for the Middle East and Africa.

“If we remember back to the Ebola crisis and also now the COVID-19 crisis, burials are a big issue,” Wilmot said. “Religious leaders play a very important role in advising communities on how to deal with the issue of burials without infecting other people, and also in getting people to accept social distancing in places of worship.”

Collectively, the plenary session speakers laid out the fundamental importance of faith groups in dealing with disasters. This, said H.E. Cardinal Matteo Zuppi, Archbishop of Bologna earlier in the day, will be the theme carried through to next year’s G20 Interfaith Forum.

“Believers will come together to reflect together, in an effort which is the opposite of the current pandemic. If the pandemic is an evil that divides us all, this meeting will bring everyone together to find pathways to the common good.”