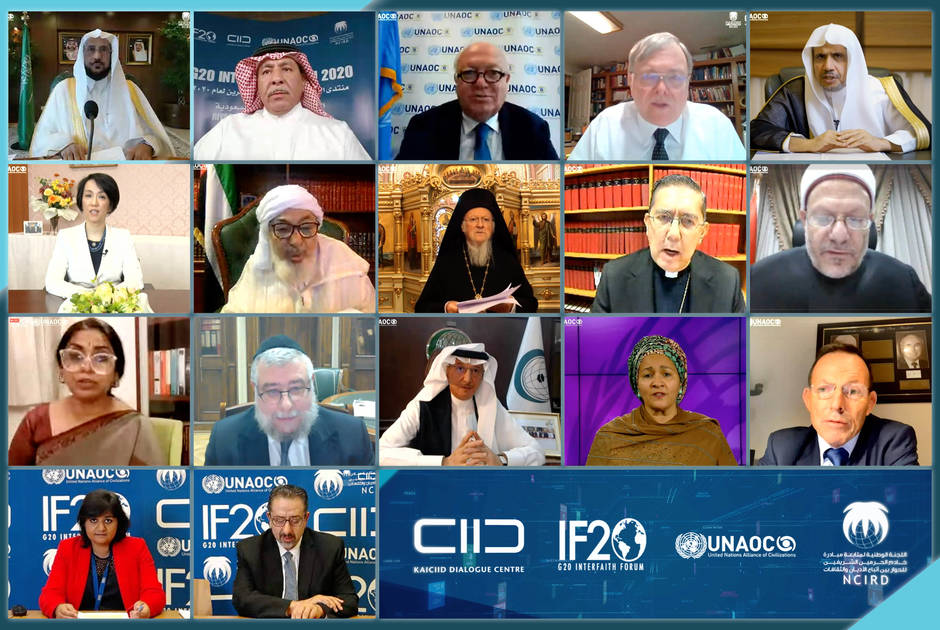 Convening a worldwide gathering of religious leaders and institutions, policymakers and other experts is enough of a challenge under normal circumstances, let alone in the midst of an unparalleled global crisis.

Even so, KAICIID and its partners, the United Nations Alliance of Civilizations (UNAOC), the G20 Interfaith Association and Saudi Arabia’s National Committee for Interfaith and Intercultural Dialogue, successfully launched the first ever virtual incarnation of the G20 Interfaith Forum on Oct. 13, with an opening plenary session followed by panels on countering hate speech, protecting religious cultural heritage and addressing modern slavery.

Over the next five days, over 1000 participants will discuss the most pressing issues facing the global community – hunger, poverty, a global health crisis, inequalities and climate change – in order to contribute recommendations to policymakers at the upcoming G20 Summit hosted this year by the Kingdom of Saudi Arabia.

Although this is the seventh annual Interfaith Forum, organizers were forced to rethink the event conceptually and practically due to COVID-19. Not only did they take the event online, they adjusted the agenda to reflect the extraordinary circumstances communities and countries across the world are facing.

Welcoming attendees, speakers emphasised that this is not a one-and-done event, but an ongoing process.

That process, said KAICIID Secretary General, H.E. Faisal bin Muaammar, opening the Forum, started in July with a consultation between religious leaders, faith-based experts, and policymakers in the Arab Region.

“The ‘Road to Riyadh’, as I call it, has wound its way through Asia, North America, Latin America, Europe and the Middle East in a series of unprecedented consultations on some of the most pressing challenges in the field of human development,” he said.

Each region, he added, has had different challenges and responses, but one refrain was clear: religious leaders are already at the forefront of humanitarian aid, and increasingly, issues of sustainable development. For this reason, bin Muaammar suggested that the G20 Interfaith Forum be considered in future as an Official Engagement Group of the G20 itself.

Both representatives of intergovernmental organizations and a range of religious institutions were able to agree on most points, as their speeches took on similar tones and touched on points of common concern.

Each spoke of addressing the role of religion in peacebuilding and conflict prevention, confronting the COVID-19 crisis, the empowerment of women, youth, and the vulnerable, the threats of climate change, and disaster-risk reduction.

"We have witnessed how faith-based organizations and our leaders have embodied the principles of leaving no one behind. They fight for social justice and mobilise resources to support the hardest to reach. Faith actors have a track record of being on the front line when crisis hits home."

H.E. Dr. Amina J. Mohammed, Deputy Secretary-General of the United Nations and Chair of the United Nations Sustainable Development Group, reiterated the importance of faith communities in the acheivement of Agenda 2030. “You have joined together from many faiths to reaffirm our shared faith in humanity. You’re also shaping the better world we need – a world that is more inclusive, resilient and sustainable. The United Nations stands with you,” she said.

Dr. Kezevino Aram, Director of Shanti Ashram and Member of the KAICIID Board of Directors reminded participants that this conference marks the beginning of what could lead to transformative change. “It is not the ‘road to Riyadh’ but the ‘roads from Riyadh’ that will lead our conversations and help us see how to make the fruits of dialogue concrete.”

Beyond serving as a metaphor, Riyadh and the Forum’s Saudi Arabian hosts featured prominently in the preparation for the event and its opening plenary.

All highlighted the Kingdom’s critical intervention in combatting COVID-19 and welcomed the kind of interreligious dialogue that the G20 Interfaith Forum exemplifies.

“Looking at all the endeavours of the Kingdom of Saudi Arabia we see the fruit of cooperation and coordination between international and regional religious and governmental institutions,” said H.E. Abdullatif Al-Sheikh, the KSA’s Minister of Religious Affairs.

In this spirit of partnership, each speaker vowed to use their platforms of faith to go beyond talk to inspire real change and concrete solutions to global problems.

“We will use this opportunity to raise our voice against structural inequalities such as discrimination, racism, ethnocentrism. Policymakers need to know that we call for zero tolerance of injustice and any other form of discriminatory practice,” said His All Holiness Ecumenical Patriarch Bartholomew, Archbishop of Constantinople-New Rome and Ecumenical Patriarch.

In Europe, Chief Rabbi Pinchas Goldschmidt, President of the Conference of European Rabbis, said that his involvement with the KAICIID-supported Muslim-Jewish Leadership Council has particularly targeted discrimination and hate speech across all communities.

“We’re working together with all faiths, Christians, Muslims, Jews and people of no faith to maintain human rights and freedom of religion in Europe, because without that there is no future for the European project,” he said.

Panellists in the session on countering hate speech agreed that dialogue, along with education which is free of prejudice, was key to neutralising hatred.

"If we want to make a difference, we need to try to understand the beliefs of others. That does not mean that we have to change our own and convert to another religion. But we have to speak about other beliefs, and understand their perspectives, so that we can help reduce the spread of hate speech among people,” said H.E. Grand Mufti Dr. Nedžad Grabus, from the Islamic Community in Slovenia.

Several of the panellists also pointed out the importance of targeting gender dimensions within coversations around hate speech.

“It has struck me that a good amount of hate speech targets policy for women especially,” noted Rev. Susan Hayward, Senior Advisor for Religion and Inclusive Societies at the U.S. Institute of Peace.

“Sometimes speech criticises women who are outspoken or step out of what are considered to be acceptable gender norms... I would argue for religious actors to recognise and address this gender dimension because religion has something to do with how gender and gender norms are understood."

Religious cultural heritage initiatives must be underlined by respect for human rights, with particular observance of Article 18 of the Universal Declaration of Human Rights (that all people have the right to freedom of thought, conscience and religion).

Panellists further noted that countries that hold sites of religious cultural heritage have a responsibility to address the protection of these sacred places while working towards the SDGs.

"By preserving cultural heritage - and we’re talking here about religious cultural heritage - we are directly affecting SDG#16 which is ‘Peace, Justice and Strong Institutions’”, said H.R.H. Amb. Princess Haifa al-Mogrin, Permanent Delegate of the Kingdom of Saudi Arabia to UNESCO.

“This is a time when we should reflect on the tens of millions worldwide who suffered for years, or even a lifetime in these states of anxiety in the darkness of human trafficking and modern slavery," Hyland said.

Panellists pointed to the need for increased engagement with civil society and faith-based organizations which are already working hard to address human trafficking in their own communities such as through a modern slavery helpline in the UK.

According to Don. DDr. Michael H. Weninger, Member of the Pontifical Council for Interreligious Dialogue, however, more must be done. Injustice, exploitation and abuse are often deeply institutionalised due to financial profit.  There is a need for faith leaders to challenge these social injustices, particularly as they constitute a fundamental issue of human rights.

“The International Conference on 21st Century Slavery stated that human trafficking constitutes a shocking offense against human dignity, and a grave violation of fundamental human rights, particularly the sexual exploitation of women and children,” he said.

Hyland added that religious institutions can lead the way in enacting transformative change.

"It will take extreme determination and great leadership, placing people at the front of the queue, particularly those who are vulnerable,” he said. “It can be people of faith who drive this agenda, carry the responsibility and call us to account so that future generations no longer have to be exploited."

“We need your creativity to create an oasis of hope and inspiration in the midst of an unprecedented global crisis,” he said.