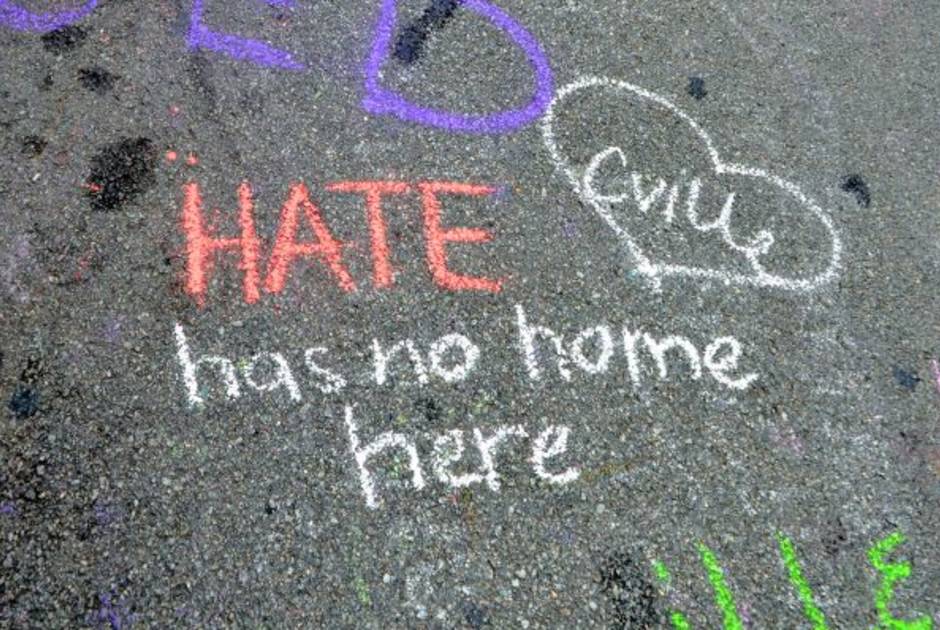 Nayana Jayarajan is Deputy Director of Communications at KAICIID. She is currently researching how policy actors, States and governments can leverage the unique potential of faith actors to address contemporary challenges such as hate speech, extremist rhetoric and violence.

Hate speech is on the rise worldwide, and COVID-19 is partly to blame. As the pandemic spread around the world, Jews, Ba’hai, Muslims, refugees, Chinese and Asian communities and individuals, and other marginalised communities have become targets for conspiracy theories, stigmatisation and stereotyping. People belonging to these, and other, minority groups have been variously blamed for originating the virus, spreading disease, drawing financial profit from the pandemic, working with foreign groups to weaken societies’ response to COVID-19, damaging the effectiveness of vaccination campaigns, and using more than their “fair share” of resources, medical and otherwise. These misinformation and disinformation campaigns have been carried out on social media apps like Telegram, WhatsApp, Tiktok, Facebook and Twitter, in political speeches and rallies, newspapers and TV broadcasts, and even sermons. They have been used to justify exclusion, discrimination, harassment and even violence.

The rising curve of COVID-19 related hate speech is dramatic, and worrying, but it is a symptom, rather than the cause, of a general increase in hate speech worldwide. Europe is no exception to this trend.

Across the continent, members of minority groups, especially religious and ethnic minorities, are reporting increased harassment and hate speech, both online and offline. A recent report by the anti-semitism Reporting Office of the Jewish Community of Vienna (IKG), found that the number of reported incidents of anti-Semitism in 2020 (585 incidents, an increase of 6.4%) is the highest ever recorded. A similar trend emerged in Germany, where police logged 2,275 crimes with anti-Semitic intent, also the highest level since records began to be kept in 2001. Far-right groups and xenophobic nationalists continue to portray Islam as a religion that is incompatible with Europe, and European values, and anti-Muslim rhetoric makes Muslims visibly practising their faith uniquely vulnerable to verbal and other harassment. This is especially true for women.

While there is near-universal recognition that hate speech is on the rise, and must be addressed, this unanimity can break down when the discussion turns to how it must be addressed. But most experts and policy institutions agree: hate speech is a complex social problem that warns of deeper social issues, and requires a multi-stakeholder, multi-level approach comprising both legislative and social instruments.

Hate speech has proven notoriously difficult to define, and therefore to record, monitor and regulate. The words “hate speech” tends to raise a variety of questions: what is hatred? And, as one expert points out, does the word “hate” in “hate speech” mean that the speaker is motivated by hate, or that he/she wants to incite hate in the listener, or receiver, or that he/she wants the receiver to feel hated? And what about the role of context in defining hate speech? A term or representation which may cause deep offence to one person or group, may not be seen as offensive by another. Offensive terms often become innocuous over time, with the reverse being equally true, and sometimes, the motivation of the speaker can become relevant.

In general, most sources agree: hate speech must be targeted at a particular group or a member thereof, to qualify as such. For example, to say “I hate you” would not qualify as hate speech. But “I hate you because of (your identity)” would qualify.

THE CHALLENGE OF LEGISLATION

Laws that seek to address hate speech within a legal context, therefore must quantify, or list, the groups who are protected, and describe the motivations and contexts that qualify speech as hate speech, in order to be enforceable. For this reason, legal standards on criminal hate speech, and the degree of protection provided to victims, vary widely from country to country.

Legislative efforts to regulate hate speech also carry with them the risk of misuse: it is not unheard of for governments to use anti-hate speech laws to discriminate against journalists, or even the very groups they are meant to protect.

The precarious balance between protecting individuals from the harm caused by hate speech, and the imperative in democratic societies to safeguard the freedom of speech and expression is one that policy makers in Europe and elsewhere have worked hard to maintain through a number of legal and policy instruments.

The other facet of hate speech which makes it difficult to address through legal means alone is a more recent one. Much (although by no means all) hate speech is today originated, propagated and disseminated on the internet: this means it can spread beyond borders, mutate across channels and multiply in defiance of any efforts to control it. Online anonymity makes it difficult to identify perpetrators, let alone bring them to justice.

Online publishers and tech companies therefore find themselves in the position of regulating hate speech on their platforms, but in the absence of a binding regulatory framework, they often lack the resources and motivation to do so. Facebook deletes around 66,000 entries of hate speech every week. The European Commission’s Code of conduct on countering illegal hate speech online, which is a voluntary code of ethics for technology companies, is a promising start, but it remains voluntary, and self-enforced.

Many of these factors; the nebulous nature of hate speech, the difficulties of identification and classification,  the trauma and suffering experienced by victims,  and the widely varying levels of access to state and civil-society support across European societies; mean that hate speech against religious and other minorities is extremely difficult to track and monitor in a systematic way.

A legal or regulatory approach, therefore, can only be half the answer to the question, how can we address hate speech? COVID-19 has demonstrated that hate speech, much like the virus, can morph and mutate faster than our ability to stamp it out.

The only sustainable solution, therefore, is to enhance societies’ resilience to xenophobia and intolerance, through an inclusive approach that fosters and accommodates the full diversity of religious, belief, racial , ethnic and other identity-based communities, no matter how numerically small.

Organizations like KAICIID work to support and enhance the legal framework on the prevention of hate speech by addressing the root causes of the phenomenon: as the OSCE terms them, “discrimination and intolerance” which are “among the factors that can provoke conflicts, which undermine security and stability.” For KAICIID, interreligious and intercultural dialogue must be a key component of any effective strategy to address hate speech, because it allows societies a safe space to a. raise awareness of different religious and belief communities and their human rights, b. foster understanding between individuals of different religious or belief backgrounds, c. promote respect of different religious and belief communities.

THE SUPPORTIVE ROLE OF DIALOGUE

Interreligious and intercultural dialogue can, for example, allow members of a society to learn more about the history and tradition of religious rituals and modes of dressing, thus making them less unknown (and threatening). Interreligious and intercultural dialogue can also provide a safe space for the discussion of the rights and responsibilities of different groups within a society. It can also help religious communities to better understand each other: religious communities can often be breeding grounds for hate speech, even as they themselves may be targets.

For example, 41% of respondents of a recent FRA survey on anti-Semitism said that the harassment they experienced came from someone with extremist Muslim beliefs. Interreligious and intercultural dialogue can help religious communities build internal resistance to hate speech, and find ways to identify, report and mitigate incidents of hatred.

Interreligious and intercultural dialogue can also provide platforms for religious communities to mobilise to speak up for each others’ rights, as in the case of the KAICIID-supported European Muslim Jewish Leadership Council (MJLC) whose members work together to address Islamophobia and anti-Semitism, or in the case of the Kreuzberg Initiative Against Anti-Semitism (KIGA), which helps to develop programmes and concepts to enable multi-ethnic schools to tackle anti-Jewish sentiments with sound arguments.

For KAICIID, the role of leaders of faith communities in the prevention of hate speech is an essential one.  In the wake of a spate of terrorist attacks across Europe in 2019/2020, hate speech against religious minorities rose dramatically. Hate speech can lead to incitement to violence, and hate crimes, threatening a vicious cycle of violence, discrimination and scapegoating which can be difficult to stop. Religious leaders can act as powerful beacons of tolerance by speaking out against hate speech in their communities, using their platforms as educators and leaders to preach about the importance of diversity and inclusion, and presenting examples of interreligious coexistence through their public presence at interfaith initiatives.

In order to be effective, interreligious and intercultural dialogue must be inclusive, transparent, confidential and free of agenda. It must take place at every level, from individual to institutional, and seek to engage as many sectors of society as possible. It must involve governments and policymakers, and benefit from policy support and buy-in. KAICIID seeks to work with transnational policy institutions such as the UN, OSCE-ODIHR, CoE, ECRI and others, as well as with religious institutions, religious communities and the victims of hate speech, to find equity-based, sustainable ways to address the root causes of hate speech.

31 October 2019
The Power of Words Role of Religion, Media and Policy in countering Hate Speech and promoting Peaceful Coexistence
9 October 2018
Faced with Rising Xenophobia, Hate Speech and Policies Limiting Religious Practice, European Jewish and Muslim leaders agree to Cooperate
18 August 2017
Those Who Commit Violence in the Name of Religion Act “Not from Faith, but from Hate”
6 March 2015
Platform of Religions and KAICIID to Counter Hate Speech in the Central African Republic
END_OF_DOCUMENT_TOKEN_TO_BE_REPLACED