Faith in the UN: How religious actors are addressing the world’s challenges together in an age of distrust 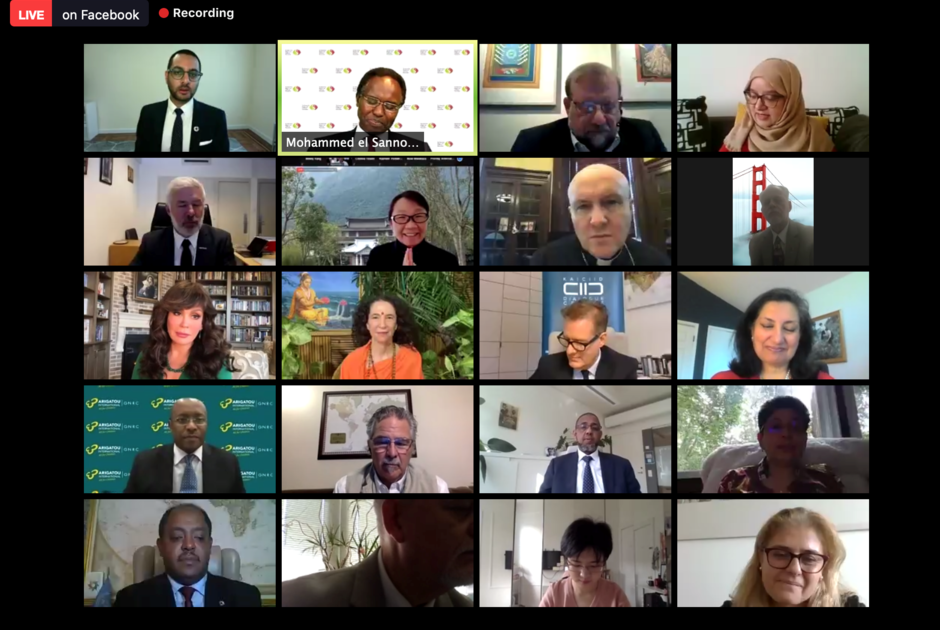 If there is one thing the worlds’ religious leaders can agree upon, it’s that as the United Nations (UN) celebrates its 75th Anniversary in 2020, it is doing so in the midst of an almost unprecedented sequence of challenges.

Threats to peace and security, human rights, and development abound as a pandemic threatens millions of lives and aggravates pre-existing inequalities. All the while, climate change endangers the very planet the UN seeks to unite.

With these trials at the forefront of their minds, the UN’s Multi-faith Advisory Council (MFAC) convened “Faith in the UN: A Global Online Conference,” on Tuesday, September 8, commemorating the UN’s Anniversary and looking to the future of faith-based and faith-inspired work on development and democracy, international peace and security.

Welcoming a global cadre of participants, Gopal Patel, Director of the Bhumi Project and co-chair of MFAC, invited participants to engage deeply with the event’s theme, “exploring how faith-based organizations can uplift and support the work of the UN” and four critical conversations of concern: restoring trust in the UN, securing youth and children’s futures, the role of faith in international governance, and women’s advancement.

The numerous panelists included the Most Revd Justin Welby, Archbishop of Canterbury; Henrietta Fore, UNICEF’s Executive Director; and model, actor, and Goodwill Ambassador to the UN, Dia Mirza, among many others.

Most pressing was the question of how the work of the UN can be trusted in a world experiencing a meta-crisis of confidence in its mandate.

Prof. Azza Karam, Secretary General of Religions for Peace (RfP) and founder of the UN Interagency Task Force on Religion and Development, was upfront about the challenges.  She said, “everything, the air we breathe, the water we drink, and the land we live on are deeply threatened.”

Undeterred, she said, “it is a perfect time to come together as multi-religious actors working in the UN system, with the UN system, and for the UN mandate.”

Each panelist echoed Karam and emphasised faith-based and faith-inspired actors’ importance  in addressing the world’s manifold challenges at a time when global partnerships are at risk.

Sadhvi Bhagavati Sarasvati, president of the Divine Shakti Foundation, spoke for many when she said, “our hope impels us to act, to serve, to help and to heal. We are called by our faith to work for peace, security, and a healthy, happy, sustainable development.”

Together with other participants, Sarasvati reaffirmed the collective commitment to multilateralism and its ability to make real, lasting change and avoid global calamity and conflict.

“To do that work hand-in-hand, heart-in-heart with the UN fulfills our mutual, collective mission with the greatest impact, greatest influence, and insuring that no one is left behind,” she said. Such sentiments were expressed throughout.

One oft-quoted statistic was how worldwide, eight in ten people identify with a religious belief. Because of this, Faisal bin Muaammar, Secretary General of KAICIID, said, “any government, non-governmental or intergovernmental organization at a policymaking level, including the UN, depends on the input of faith-based actors and religious leaders in their efforts to empower people, promote peace and ensure inclusiveness around the world.”

Guests drew attention to how religious actors play pivotal roles in addressing cross-cutting worldwide challenges, including gender inequalities, the climate crisis and protecting the rights of children, and demanded collaboration to meet them.

UN Assistant Secretary General and UN Population Fund’s (UNFPA) Deputy Executive Director stressed how, “decades of experience with faith-based actors has led to the enactment of policy and on-the-ground delivery in humanitarian settings.”

Speaking directly to women’s advancement and gender equality, she said, “we have to work together to ensure that young women can access appropriate services when they are needed.”

“It is imperative that we work together and implement these global goals,” she said, “and I look forward to working together with you as you use the power of faith and your leadership to make this world better for all people.”

UNICEF’s Executive Director Henrietta Fore addressed participants via video and said, “the MFAC and its members bring to life UNICEF’s commitment to diversity, tolerance, and respect.”

Highlighting the urgent need to work together, she added, “our partnership is more important now than ever. We need your voices and support to build better systems for the future.”

Despite the anxiety about the state of global cooperation, Faisal Bin Muaammar said the development of disunity “can only be defeated through a greater commitment to dialogue and cooperation.” He said KAICIID “calls for greater partnerships across religious, political, and national divides and commits to supporting the MFAC in their important work in insuring the religious leaders organizations and the UN can continue to learn from and support each other as we address our shared challenges.”

For now, addressing the many participants in the “Faith at the UN” event, Muaammar said, “I congratulate all of you today for doing so much for interreligious dialogue and working for peace and security in all the world.”

During the conference, a movie which deals with the historical engagement of FBOs at and with the United Nations was screened. Click here to watch!