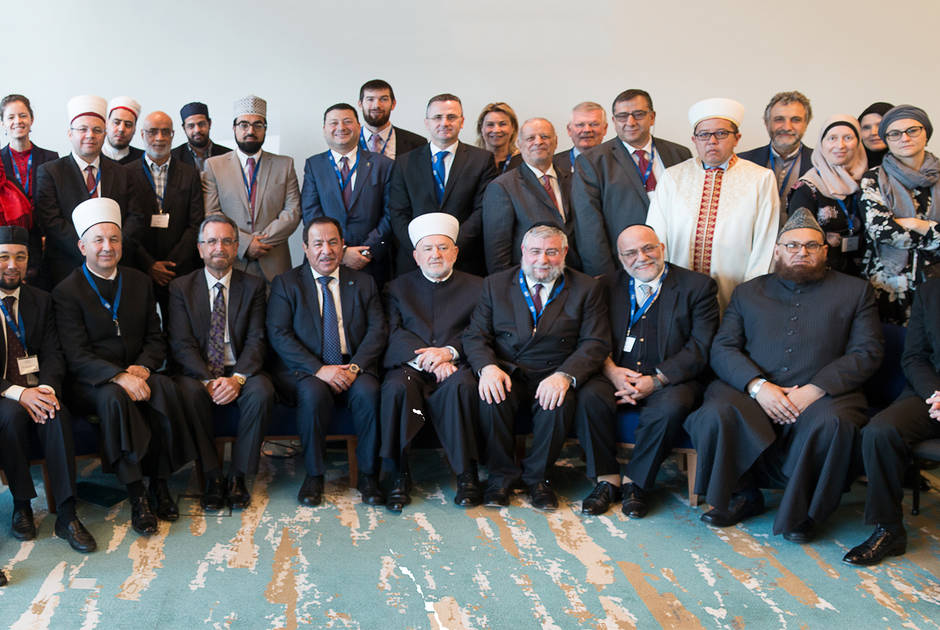 Amsterdam, 9 October: Jewish and Muslim communities in Europe are confronted with rising xenophobia, hate crimes, and policies that are curtailing their right to religious practices, leaders of these communities said at the first plenary meeting of the European Muslim Jewish Leadership Council (MJLC) in Amsterdam on Tuesday.

The Council is chaired by Rabbi Pinchas Goldschmidt, Chief Rabbi of Moscow, and Mufti Nedzad Grabus, of Slovenia, and facilitated by the Vienna-based International Dialogue Centre (KAICIID), which supports interreligious platforms for dialogue in Africa, Asia, the Arab Region, and Europe. As the only intergovernmental organization with the sole mandate to promote interreligious dialogue, KAICIID saw in the MJLC a unique opportunity to fill a significant gap in the relations between religious communities in Europe, and has lent it support and capacity building since its founding. KAICIID will also continue to support the Council in the development and implementation of its future activities, through assistance, partnership and expertise.

In his opening address, the Secretary General of KAICIID, Faisal Bin Muaammar called on the members of the Council to show leadership in promoting Jewish-Muslim dialogue: “Europe needs your commitment to equal citizenship, and respect for diversity. And the rest of the world, who look to Europe as a model in this field, need your wisdom. We must be honest about the fact that across this continent, there are forces gathering who seek to undermine the long European experience in religious diversity and pluralism. We need your commitment to ensure continued recognition of the role that religious traditions play in safeguarding our shared heritage. We need your commitment to advocate for the shared rights of religious groups in Europe, and to build trust and cooperation between Muslim and Jewish communities.”

The Council was founded to serve the need, more urgent than ever in today’s Europe, to free religious people and religions from prejudice, false claims, attacks, and violence. They were meeting in Amsterdam to discuss how European Jewish and Muslim communities can work together to protect their respective communities’ religious practice and promote solidarity between their communities in the face of adversity.

Chief Rabbi David Rosen, KAICIID Board Member, who helped found the forum said: “We will not only address different religious issues, but we will also combat a great deal of mutual misunderstandings and demonization. Our religions call on us to be blessings toward humankind, and therefore, the need to collaborate is not just a necessity, it is a moral imperative.”

Representatives of Jewish and Muslim communities from Albania, Austria, Belgium, Bosnia, Denmark, Finland, France, Germany, Ireland, Italy, Lithuania, the Netherlands, Poland, Romania, Russia, Slovenia, Switzerland,  and the United Kingdom described the challenges facing their communities in different parts of Europe, and described efforts that they had undertaken to promote Jewish-Muslim dialogue in their countries.

The participants agreed that Jewish and Muslim communities faced common challenges, including the rising instrumentalisation of religion for political ends, restrictions on the right to practice their religions freely, and the rising influence of right-wing xenophobic movements. Participants also noted that discussions of “European identity” often excludes Muslims, and that Islam is seen as un-European, even though Muslims have been part of the fabric of European society for many decades, and even centuries.

The meeting was hosted by the Municipality of the City of Amsterdam and supported by KAICIID. It was held under the patronage of the Vice President of the European Parliament, Mairead McGuiness.

The Council will be establishing contact with EU bodies, discussing and unifying on ideas such as circumcision, religious clothing such as the hijab, and countering islamophobia and antisemitism, providing a positive counter-narrative to division, sending unified messages, providing statements and publications.

The MJLC will also build relationships with EU policy makers and religious institutions in Europe, and monitor emerging issues impacting the interests of both communities such as discrimination.

The European Muslim and Jewish Leadership Council (MJLC) was founded by fourteen European religious leaders – 7 Jewish and 7 Muslim religious leaders in Vienna in 2015 with the support of KAICIID with the goal of collaboration on issues of common concern and to establish greater trust and common understanding between their communities.

The Council is acting in a climate of increasing islamophobia, antisemitism, and xenophobia in Europe, while European legislative initiatives are more frequently proposed that would limit or forbid Jewish and Muslim religious and traditional practices (e.g. clothing, circumcision, and slaughter regulations). The MJLC serves as an advocate for their communities' exercise of their religious freedoms, anchored in European law, through joint campaigns to defend the rights of Muslim and Jewish religious communities in Europe. Through outreach and advocacy the Leadership Council wants to win the trust and support of young people and offer them a path that allows them to thrive in Europe and to lead fulfilled lives of faith.

About the International Dialogue Centre (KAICIID):

The International Dialogue Centre (KAICIID) is an intergovernmental organization that promotes dialogue to build peace in conflict areas. It does this by enhancing understanding and cooperation between people of different cultures and followers of different religions. The Centre was founded by Austria, Saudi Arabia and Spain. The Holy See is the Founding Observer. Its Board of Directors comprises prominent representatives from five major world religions (Buddhism, Christianity, Hinduism, Islam, and Judaism). The Board designs and supervises the Centre’s programmes. KAICIID facilitated the establishment of the MJLC-E and provides technical and other assistance to the Council in its activities, based on the belief that religious communities and their leadership, in dialogue with policymakers, have a central role to play in building peaceful societies.