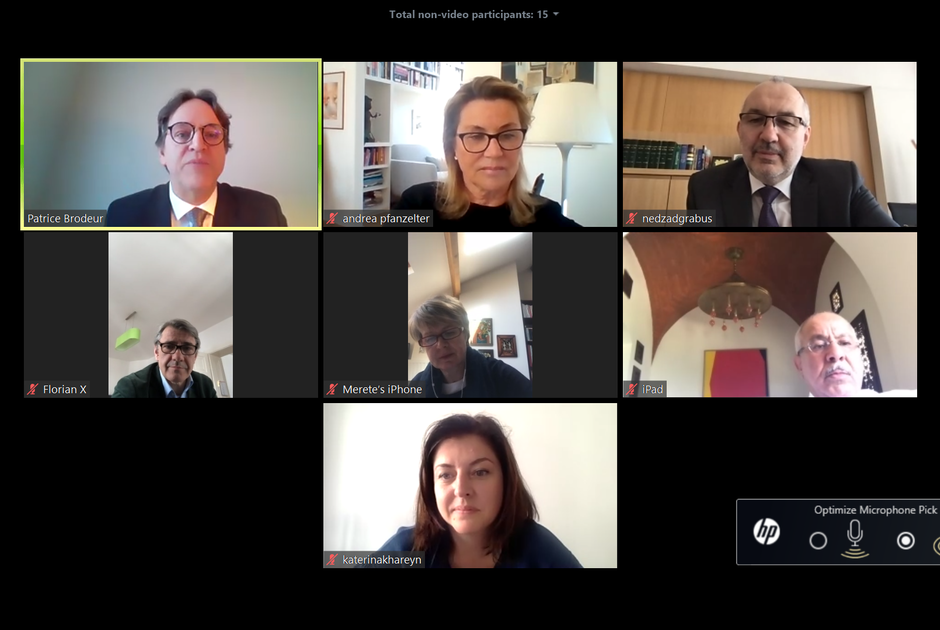 Experts at two consultative meetings hosted by KAICIID gathered to share diverse experiences and perspectives on contemporary state-religion relations in preparation for a High Level European Forum scheduled to take place in December.

With the COVID19 pandemic hampering in-person gatherings, the exploratory meetings were conducted online on April 6-7, bringing together 14 experts from a dozen European countries. The online meetings served as an opportunity for policymakers, academics and religious representatives to focus on the thematic orientation of the upcoming High Level European Forum.

Participants discussed the governance of religion at different European levels, from municipal to national to continental, and their links to each other. They realized just how diverse the approaches and structures are at each level, from top-down government initiated to grassroots civic or multi-religious led. They also shared about several social ethical needs that policymakers address in collaboration with a variety of religious, spiritual and philosophical actors, such as questions related to freedom of religion and conscience, prevention of discrimination, hate speech and hate crimes.

“In the European Union, relations between the state and religion are very diverse. We have come to realise that as government officials, we are often not literate enough to know what such a great diversity means for our legal frameworks, but also for the mental framework of a state, for the place that religion should occupy in our societies. There must be greater literacy concerning religion-state relations in Europe, and such literacy needs to be functional too”, one participant said under anonymity due to Chatham House rules.

The High Level European Forum is designed to provide a space of dialogue between different kinds of actors (policymakers, religious and civic actors, etc.) who are interested in sharing their knowledge and experiences about good practices when it comes to state-religion relations. The Forum will include both interreligious and interconvictional dimensions, as they intersect with a variety of ideologies today. The aim is to allow these diverse actors to learn from each other with the hope that they can improve their mutual understanding so that each can collaborate better to foster social cohesion and peace across Europe.

In recent years, religious issues have been placed back on public policy agendas, due to a notable increase in religious diversity on the continent driven by globalisation, internal transformation of the traditional religious landscape as well as increased international migration and transnational religious networks.

Prof. Patrice Brodeur, scholar of religious studies at the University of Montreal and KAICIID Senior Adviser, points to the end of the Cold War as a turning point in European politics as many Eastern European nation-states experienced a resurgence of religious identity.

“Many policymakers today find themselves ill-equipped to deal with religious issues in the sphere of public policy. Additionally, terror attacks carried out by extremists who exploit religion to justify their acts have led to policymakers realising that they may no longer be able to afford leaving religion out of the equation if their intention is to better understand the source of such radicalisation and how to tackle it.”

“There is an equally important challenge that face many religious actors as they learn to improve their understanding of democratic structures and how best to contribute to them as citizens, both through their respective religious communities and civic organisations,” Brodeur added.

KAICIID Secretary General: “Religious leaders and policymakers are at the frontlines in protecting communities”

In his opening remarks, KAICIID Secretary General Faisal bin Muaammar emphasised that the unprecedented COVID-19 crisis affecting the entire world is a reminder of how “interdependent we all are of one another as human beings” as well as the need for unified leadership between policymakers and religious communities.

“We are always at the frontlines when it comes to protecting our communities, our people and our set of values, whether we are religious leaders or policymakers. We contribute to adopting new measures to protect the most vulnerable and we also know that our respective lines of work must continue”, the KAICIID Secretary General said.

One of the key findings from the two meetings is that policymakers need to develop new and more sophisticated models for the management of religious diversity that acknowledge cultural and legal differences, remaining open to the contributions that religious actors can make in fostering solidarity towards the common good, within national, European, and global notions of citizenship.

“Whether based on language, ethnicity or religion, all identity groups in Europe are entitled to demand full and equal inclusion in society while preserving their unique particularities in both public and private spheres. It takes appropriate and sustainable public policy solutions to respond to such diverse needs for recognition and inclusion”, Prof. Brodeur said.

Participants also agreed that the institutionalisation of relations between different levels of government across European states and religious communities is of utmost importance.

“From my experience, EU member states are realising how important it is to foster collaboration with religious leaders. I believe that preserving the approach of the secular state in Europe is perfectly compatible with increasing collaboration with religious actors. As the situation is different in every state, a key point of this event will be to share good practices so that all of us can learn from each other’s experiences”, another participant commented.

Prof. Brodeur says that participants will continue to engage throughout the rest of the year in more in-depth research and analysis. “We will incorporate all of the valuable information that was shared in the consultative meetings in preparation for this High Level European Forum at the end of 2020.” He hopes that this Forum will gather relevant policy, religious and civic actors from all countries of continental Europe.