Exhibition 'Growing Together" of Asylum Seekers' Art hosted at KAICIID The International Dialogue Centre (KAICIID) celebrated a landmark event when it hosted its first vernissage in the Centre’s Vienna headquarters, opening the exhibition ‘Growing together’ (‘Zusammen-Wachsen’). The exhibition displays artwork by asylum seekers and was organised in cooperation with Austrian NGO ‘Creativity Without Borders’ (‘Grenzenlos Kreativ’). The powerful paintings are on display in the Centre’s exhibition room which is open to the interested public.

The artworks currently on display at the Centre were painted by three artists, who had never used a painting brush before arriving in Austria: Deyeballa Doucoure from Senegal, Durmohammad Fasekhi from Afghanistan and Fahad Al Farha from Iraq. Addressing the audience, all three expressed gratitude for, and pride in seeing their paintings up on the walls.

The exhibition was opened by KAICIID Director of Communications, Peter Kaiser, highlighting art as a form of dialogue across cultures without language barriers. Daniel Hofer, chairman of ‘Grenzenlos Kreativ’, introduced the association’s goal as fostering understanding and integration through art. The artists also provided an insight into their integration experience which included short lectures in Arabic and Farsi on values of Austrian society to the refugees present at the event.

The vernissage was attended by various people with migration experience and their German teachers as well as by a group of local students and the interested Viennese public. The evening concluded with a tour through KAICIID’s headquarters on Vienna’s historic Ringstrasse.

KAICIID will host other exhibitions in the upcoming months.

About ‘Creativity Without Borders’

The artworks were provided by the charitable non-profit organisation ‘Grenzenlos Kreativ’ (‘Creativity Without Borders’). ‘Grenzenlos Kreativ’ engages newly arrived persons living in the remote areas of Austria’s province Styria by offering painting courses and providing them with an understanding of art. These courses not only serve as a pastime activity but also as a way of therapy to overcome the experiences of flight and expulsion. The therapeutic effects are particularly evident in the artistic evolution of the used colour schemes from dark to bright in the paintings. 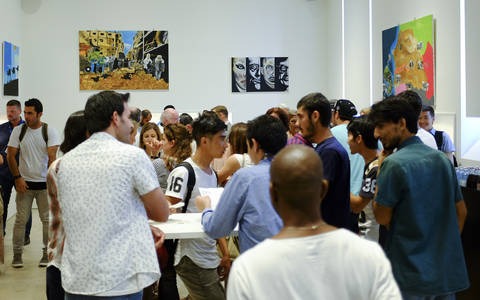