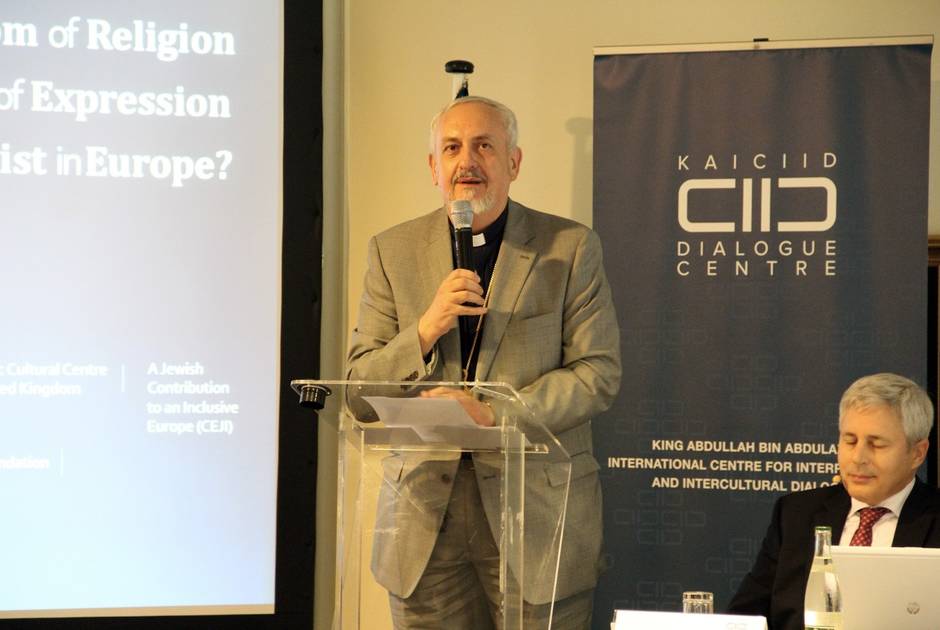 In Paris, France on 15 and 16 June 2015, the International Dialogue Centre (KAICIID), based in Vienna, held the European Media Forum on the universal human rights of freedom of religion and freedom of expression, which gathered European religious leaders, journalists, as well as civil society organisations. This forum is part of the implementation of the Vienna Declaration  “United against Violence in the Name of Religion”, which was adopted in November 2014 and was followed up by the May 2015 conferences Beirut on preserving religious and cultural diversity in Syria and Iraq.

“This meeting denounces violence in the name of religion. Religious leaders and journalists need to work closely together since we have similar missions as mediators to promote coexistence.  We also recognize that freedom of religion and freedom of expression complement each other. It is very important that we affirm this shared commitment here in Paris, a city that suffered attacks on journalists and freedom of expression, anti-Semitic attacks, attacks on freedom of religion, and on our security,” said His Eminence Metropolitan Emmanuel.”

The participants agreed that closer relations between journalists and religious communities increase the media’s religious awareness and the religious leader’s media awareness. Cooperative working relationships and shared understandings of the mindful exercise of universal rights will help both media and religious leaders proactively counteract hate speech and discrimination by fostering empathy for people of different faiths and cultural backgrounds.

The following organizations supported the European Media Forum:  the World Council of Churches; the Conference of European Rabbis; the Hindu Forum of Europe, the European Buddhist Union; the Islamic Cultural Centre of the United Kingdom; a Jewish Contribution to an Inclusive Europe; the Blanquerna Observatory on Media, Religion and Culture; the Ethical Journalism Network; and the Religion Newswriters Foundation.