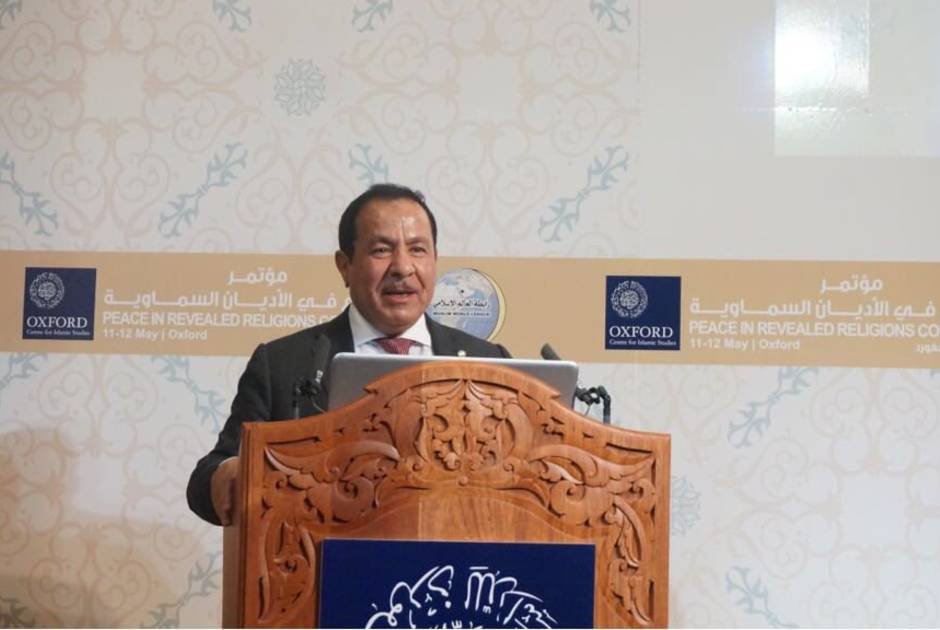 Oxford, 10 May 2018: The KAICIID Secretary General, Faisal Bin Muaammar, speaking at a conference on Peace in Revealed Religions in Oxford, United Kingdom, emphasised the role of interreligious dialogue in fostering peace.

The conference was organized by the Muslim World League, and the Oxford Centre for Islamic Studies and focused on exploring the values of peace, tolerance, and good society in the Abrahamic Faith Traditions. Opening addresses were delivered by HE Dr Mohammad ibn Abdulkarim Al-Issa, Secretary General of the Muslim World League, HE Sheikh Abdallah Bin Bayyah, President of the Forum for Promoting Peace in Muslim Societies, Sir Alan Munro, Former HM Ambassador to the Kingdom of Saudi Arabia and Dr Farhan Nizami, Director of the Oxford Centre for Islamic Studies.

In his address, the Secretary General described KAICIID’s contribution to building peace through interreligious dialogue: “Our goal is to instill a culture of dialogue in all political and social relations that builds understanding and trust between people of different religions and cultures and removes fear and prejudice. Dialogue between different religious and secular communities leads to cooperation that brings forth mutual respect between people in our diverse societies. That respect is a source of strength for communities to push back against extremism and to champion equal rights of all.

Religions play a key role in the Centre’s strategy for peace. Religious values are the foundation of harmony in community life. Many religions uphold common values like empathy, mercy, respect, equality and the sanctity of life. When religious leaders of different faiths work together, they model those values. Their example helps to positively influence their communities.”

He described the challenges of bridging the gaps between policymakers and religious leaders, a crucial task when trying to build sustainable peace:

“Our work includes dialogue in societies that are purely secular, where religion is no part of governance. And we work in societies where governance and religion are two halves of one concept.

How do we build a dialogue that bridges a gap between societies that are so different?

The dialogue has to be rooted in shared values. It does not matter where the values arose in theology or moral philosophy. The main point is that people who cannot agree on some issues will still have a trusted basis for understanding.

We have seen this in action in the Christian-Muslim platforms we have helped set up in the Arab region, the Central African Republic, and Nigeria. We have seen it in the dialogue between Buddhists and Muslims in Myanmar. These platforms bring together religious and secular leaders. They work on counteracting the manipulation of religion to foster hatred and violence. They can effect change. In Nigeria, the interreligious platform drafted legislation to forbid “hate preaching” by any preacher of any religion. That is progress.”