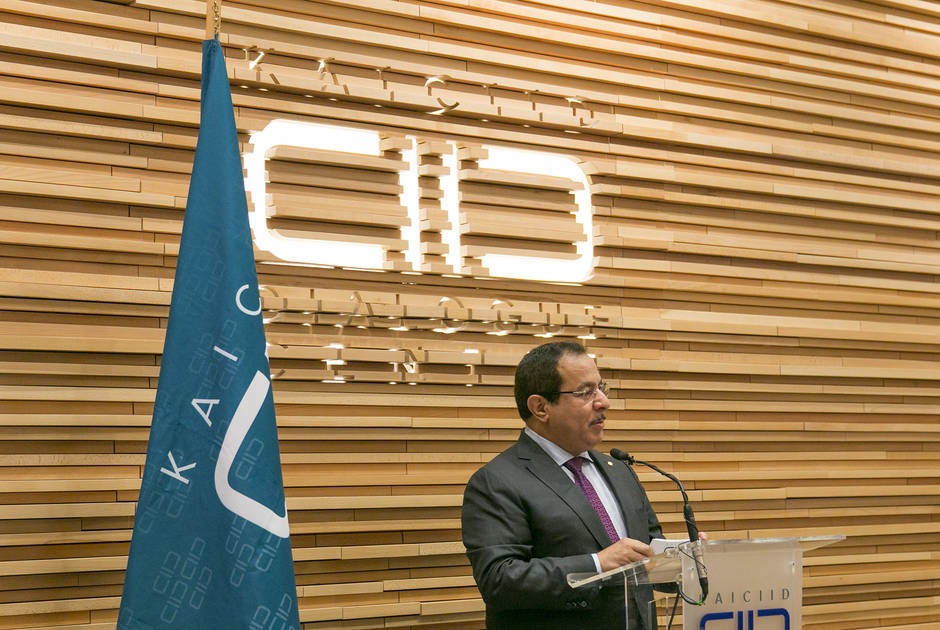 The Secretary General of the International Dialogue Centre (KAICIID), Faisal Bin Muaammar, kicked off the second meeting of the Centre’s Advisory Forum with his welcoming remarks on Monday, 6 February 2017. The full text of his speech is available here:

Welcome to the Hall of Dialogue and to KAICIID.  We meet again after ten months. In those months,   you have travelled far and wide to collaborate, to work for understanding and peace between peoples. All together, this group of about fifty active dialogue advocates may have visited nearly 100 countries.

In those months, you participated in many intense hours of dialogue. Your experience from this past year and from many years before represents a wealth of knowledge.

Now, we really need your knowledge and insights. We gather in a new era. Over the last ten months, we have begun to witness dramatic and sometimes alarming changes. Is this the start of a shift away from an extremism that has been a direct result of the misuse of religion to a new and radical extremism that has become political and ideological?

Do we now find ourselves in a new time of worrying uncertainty, where we see two rival camps of religiously-driven extremism versus politically-driven extremism, competing with each other? Do you also feel this way?

This depth of change reminds me of 1989 when borders opened and walls fell in Europe. But sadly today, the walls of fear and mistrust are rising again in the minds of people and borders are closing.

A quarter of a century ago, no one would have imagined that hatred could enflame entire countries and regions. Today, we see and hear hate spreading in different directions.

Since we last met, public discourse has become more aggressive. This discourse does not unify or clarify. It confuses people. It fuels fear. It leads people to hate.

Much of this discourse blames the “Other” and misuse of religion for the world’s problems. The deliberate crimes against the followers of different religions are of greatest concern to us.

Dear friends, I would really like to know how you assess and analyze the situation.

Some of these places have not seen this behavior since before World War Two. Popular political movements promote discrimination. Migration is denied. Political unions are dissolved. We are concerned that we may face a darker future unless we act.

Essentially, I am an optimist. Dialogue changes people and their lives. I have seen these changes with my own eyes. These xenophobic trends can only continue if no alternative is offered. We are here to offer an alternative.

In the next two days your advice, your experience and your knowledge will help to expand the use of dialogue in a time of alternative facts and fake news.

Today and tomorrow, we will be sharing our experiences, before we move into taskforces. The taskforces are your vehicles to focus on creating change in four thematic areas. These thematic areas offer an efficient way to address the issues you identified in our first meeting.

I am looking forward both to learning from your experience and your advice in the taskforces.

The four areas are: “IRD Training”, “Governance and Common Citizenship”, “Reconciliation” and “Capacity Building”. We need to set priorities and objectives for the coming twelve months, draft an action plan, and agree upon a structure to ensure coordination with each other and the Centre’s work in the field.

We are taking the first steps towards offering the alternative that will turn this trend around - from fear to trust.

On that note, I would like to conclude with a quote and story. Both give me hope.

First, a quote from the new UN Secretary General, Antonio Guterres. You know him as a champion for refugees. The quote comes from one of his first speeches. With regard to religion, I think he set a new standard for the UN.

He did not urge nations to simply promote tolerance among of different cultures and religions. Nor did he call for respect for religions.

I think he went further than any UN Secretary General before him. Mr Guterres called on all of us to help people to know that their religious identities are valued.  Helping people to value the “Other” is an ambitious and significant goal.  It is also part of our core mandate.

And now a very brief story about Dr. Simran Singh,  one of our Fellows. He is a Sikh and an Assistant Professor in the Department of Religion at Trinity University in San Antonio, Texas. He received a death threat. The threat was posted to him on social media.

Instead of responding in hate, Dr. Singh used social media to engage the community and build understanding. And in Texas, he was then praised on television news for the example he set in building understanding.

If dialogue can win support in Texas, dear friends, then I think we can help bring understanding almost anywhere. We are proud to have Dr. Singh as one of our Fellows.

With these ideas that will lead to a better future, I will give the floor to our Board. Thank you.

The video can be viewed here.