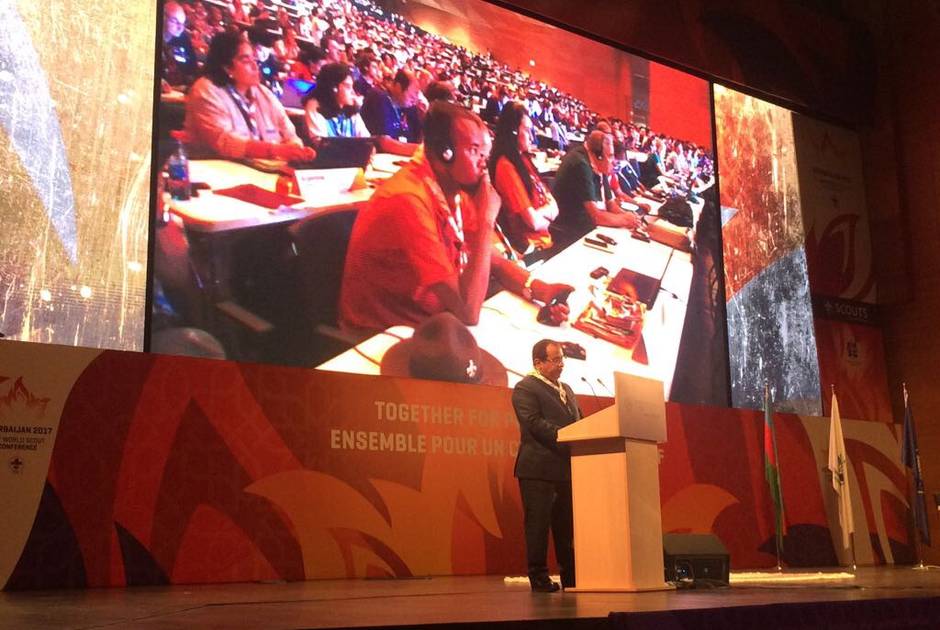 In the first ever address by a non-Scout partner to a World Scout Conference, the Secretary General of the KAICIID Dialogue Centre made a strong plea for increased dialogue among followers of different religions.

“Despite the fact that over time many have manipulated religion to justify acts of violence and hate in the name of religion, we must also recognize the integral part that religion plays in the dialogue process.

Over 80% of the world subscribe to a religious or strong ethical belief, share common values that unify them in respect and coexistence. Through our work with political, religious and cultural leaders, we are firm in our conviction that a culture of tolerance and coexistence is an achievable goal.

Religion is part of the solution, not the problem.”

The Secretary General was speaking at the plenary of the 41st World Scout Conference in Baku, Azerbaijan.

He congratulated the Scouts on their commitment to dialogue and to building a better world.

“Your generation is the largest youth generation in history.  Throughout your lives, you can make a real difference in your communities, and you will change the world for the better.

With over 40 million Scouts active around the world, you represent an amazing force for good!”

“Dialogue is thriving in the Scout movement thanks to KAICIID,” said Secretary General Al-Hendawi. “Dialogue is empowering the Scouts to deal with real-life situations as we speak.”

KAICIID and the Scouts have been working together since 2014, when the two organizations concluded a Memorandum of Understanding to promote dialogue within the Scout movement.

Their collaboration, called the Dialogue for Peace Programme, is an initiative between the two organizations to promote dialogue within the Scouting Movement.  In the three years since the first training, WOSM and KAICIID have trained more than 1000 Scouts from all six scouting regions – Africa, Arab, Asia-Pacific, Eurasia, Europe and Latin America – from all sections to facilitate dialogue and promote peace and acceptance within Scouting.

The Secretary General also launched the Dialogue Badge, which can be attained by Scouts who have completed the training in dialogue facilitation offered by KAICIID and WOSM.
KAICIID and WOSM have also collaborated on the recently released “Survey on Spiritual Development in Scouting” to analyse, evaluate and assess the role and importance of spiritual development and Duty to God among WOSM members in each Scouting region.

KAICIID and WOSM delivered a training for 100 Scouts at the World Scout Youth Forum from 4 to 5 August in Gabala, Azerbaijan delivered by joint teams of KAICIID and WOSM trainers. The Scout trainings have been based on a series of regional trainings taking place globally to promote dialogue and to activate a network of Scouting leaders from all over the world who can use dialogue as a tool for countering prejudice and extremism, as well as promote tolerance and inclusion in their communities.