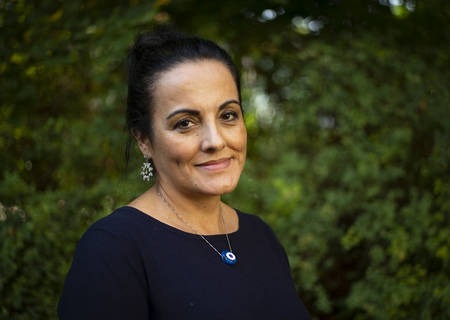 From your experience, how do you think religion can affect integration processes?

Religion is the key because we are what we are because of our faith. It doesn’t matter if we are religious or not, but religion defines the person, the culture – if I have to wear a beautiful hijab or not. Faith and religion have been part of development and civilizations since we started to live. It’s a key for cultural identification of a person anywhere. If there is discrimination, or invisibility of asylum seekers coming to Europe, it is because of religion.

How do you think religion can be involved in the integration process?

It has to be involved from the beginning until the end, especially with young people. When they come, they only bring a mobile phone, their papers and religion. Religion is the only thing they kept from home. They lost everything, but they kept their religions and beliefs, and these come with traditions and culture.

From your experience, how can interreligious dialogue contribute to integration?

It’s absolutely basic because if you invest in IRD, with creativity, education and intercultural dialogue, we build bridges of peaceful coexistence, respecting the other and their socialization.

If there is IRD, and we know, understand and respect the Other, we get to know, for example, why this girl is wearing a hijab, what is the meaning of a crucifix, and so on.

In Greece, everyone loves eating falafel, and when you realize what you are eating, you realize that falafel is a traditional food also for Muslims. Therefore, there is an opportunity to connect. There are simple things from everyday life like this that you can put together to promote integration and understanding.

From your experience, would you recommend establishing intercultural dialogue before transitioning later to IRD?

Well, that is how I work. As I am not a religious leader and don’t have the knowledge of the complexity of religion, for me it was always easy to start from intercultural dialogue such as having a lecture on the tradition of architecture, art or music in Islam, Orthodox or Yazidi music, etc. I always use music, I always use art. As we work in Lesbos, we have an emergency situation every day. We do not have time to do anything for more than 3 days because people are on the move. The only way to act immediately is doing something practical that gets you to know the Other.

We have to demystify the term interreligious dialogue. When people hear it, there is a myth of it being something very difficult, for scholars and religious leaders, but it happens every day on the street. In my organisation we always begin in this practical way.

Does your work focus on newcomers, or do you also involve the local community?

Everything I do is 50-50 – half newcomers and half local communities – especially when students are present. We start with separate sessions and then we find the moment, at a dinner, a concert, a rehearsal, or an exhibition where everyone comes together and discovers how the Other, a human being like you, is a wonderful person.

I believe that religion is not only faith, it is also culture. All the music that we have from the baroque time is religious, many beautiful buildings in the Middle East are mosques.

When many people and organizations here in Lesbos hear IRD, they say they don’t talk about religion, but how can you ignore religion? Religion is an intrinsic part of the human being. They believe that if you say that religion is important, it means that you are going to preach and ask people to convert. But some organisations are trying to do that and make newcomers forget from where they come from and what they are.

Isolation and poverty are other challenges. Although not all newcomers live in bad conditions, many young refugees in Greece are ina  very difficult position and for that they are stigmatized. It is a big challenge to have dialogue with locals. If I know that Afghanistan is a beautiful country with very talented people, if I know that Iran has a very rich cultural heritage, or what Syria was like before the war, walls can be brought down. The problem is ignorance. If you don’t know the Other, you cannot decide if you like him or not.

We are also challenged with a lack of protection and empowerment. Youth have to be welcomed properly and protected, and we have to promote empowerment and integration which will create social cohesion and allow for reconciliation if there is conflict. We can have all that only if we create spaces for dialogue. And how do we create those spaces? By using tools like  social media, and intercultural dialogue and by departing from the theoretical framework, you change and improve opinions of people.

Can you share a story of IRD & integration that gives you hope to continue working in this field?

I have worked with thousands of young people. One of the last projects was in the framework of Erasmus plus, with a secondary school in Papados, Geras, on Lesbos island. In this province they have economic challenges and some groups with a special point of view on newcomers, so together with a group of American college students from a religious organization, we organised a theatrical performance with students from Afghanistan, Cameroon, Democratic Republic of the Congo, Eritrea, Iraq, Pakistan and Syria, with students with Orthodox Christian and Muslim backgrounds.

We had a lot of rehearsals where they interacted and became friends, and then we had a final concert where everybody sang, interacted and came together. It was very positive. We also included the Greek Roma community, and they were all together acting and having a beautiful time, and as a result, they learned to understand each other and everyone was so happy. Afterwards, the students told the director that they wanted more experiences like this.

We also hold dinners once a month where groups from different countries, faiths and religions come together and everyone cooks something precious and delicious from the country. Every time they are proud of what they are and what they have learned about one another.

A few years ago we organized an exhibition dedicated to the presence of the Jewish community in Nafpaktos, Greece, until the 19th century and the Christian Orthodox Bishop Damaskinos, who helped the Jewish community and others during the holocaust. The exhibition was in an old mosque, and its target group was the local Christian Orthodox population. It was inaugurated by the Orthodox bishop and it had many visitors during duration of the exhibition. Afterwards, we did a lot of workshops on interreligious and intercultural dialogue.