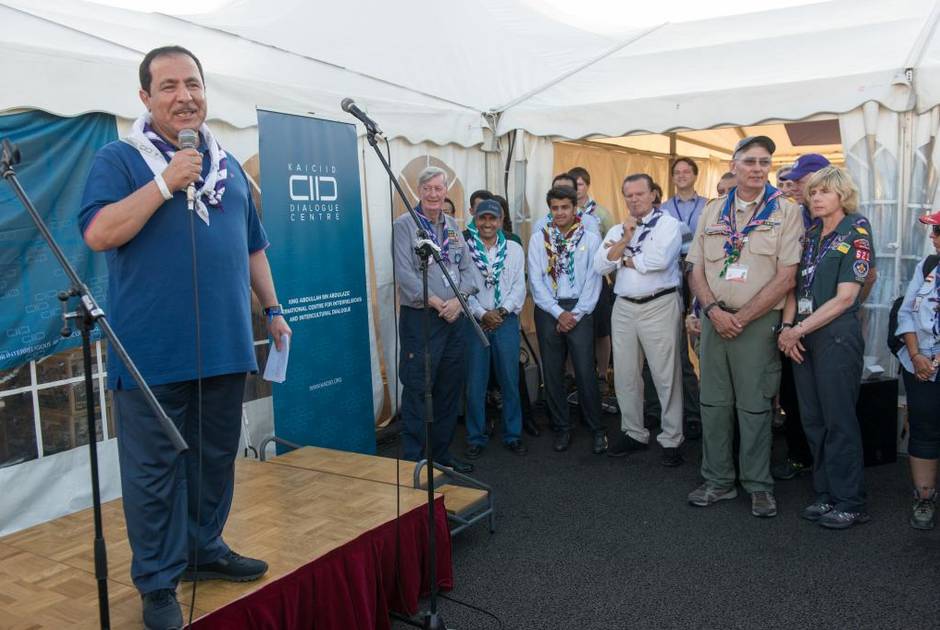 “Dialogue is a peace process and the Scout Movement is based on dialogue. A major tool of your communication is dialogue and what you are doing is building bridges,” said the Secretary General of the King Abdullah Bin Abdulaziz International Centre for Interreligious and Intercultural Dialogue (KAICIID), HE Faisal bin Muaammar.

KAICIID is doing a lot of (things) but the most important thing KAICIID did in its journey (to encourage dialogue) is the alliance with the Scout Movement,” HE Faisal added.

“No one would have thought that we would partner more than 40 million Scouts around the world! For us, this is the most valuable and honourable partnership we have ever done in our journey,” HE Faisal said.

HE Faisal was speaking during a dinner reception to celebrate several years of successful partnership between the World Organizaton of the Scout Movement (WOSM) and KAICIID at the 23rd World Scout Jamboree here.

The reception was graced by HRH Prince Bandr bin Abdullah bin Abdulaziz Al Saud from Saudi Arabia, who made a special visit and toured the Jamboree earlier in the day.

Also present at the reception were Chairman of the World Scout Foundation (WSF), Siegfried Weiser, Director of WSF, John Geoghegan, and Secretary General of WOSM, Scott A. Teare.

In its effort to promote peace through interreligious and intercultural dialogue, KAICIID had introduced the Dialogue Badge for Scouts earlier this year and started developing training manuals to “train the trainers”. Next would be to develop a handbook to provide a reference for Scouts and the leaders in obtaining the Dialogue Badge.

KAICIID had also introduced several games and competitions to make learning and interaction fun for Scouts. One of the contests is the “tweet a peace message with your selfie” and the winner of the week is Assoti Essosolim Jude from Association Scoute du Togo, the first to win the iPad Mini.

“I believe that nobody in the world can do what Scouting is doing. It is really a noble journey and we really admire that. We are proud to be a partner and feel that the programmes we already have with WOSM will make this a lasting partnership,” HE Faisal said.

During the reception, four new individuals were bestowed the World Baden-Powell Fellowship (BP Fellowship) recognition. The BP Fellowship recognises individuals for their contributions to the World Scout Foundation to help support Scouting.
The Fellowship provides a lifetime association with the Scout Movement and with business, government and Scouting leaders who share the same ideals. The four individuals are John Carswell, Doug Reid and Bernie Avery from Canada, Lou Paulson from USA, and Tom Marsden from the UK.