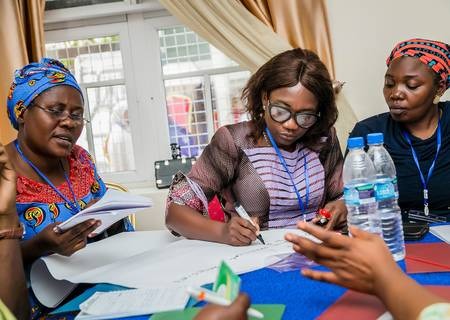 Women and young people are often disproportionately affected by violence and can be especially vulnerable to abuse, discrimination and marginalization. At the same time, women and youth are uniquely influential within their religious and social community structures. How can religious and traditional leaders advocate for, and partner with women and youth? What are the responsibilities of governments and civil society actors towards women and youth? In collaboration with UN Women, the Interfaith Dialogue Platform for Peace, a KAICIID-supported interreligious dialogue platform in Nigeria, brought together women and youth of different religious communities to discuss these questions, and recommend solutions.

At the workshop held 12 to 13 April, in Abuja, Nigeria, 41 participants from Nigeria’s Christian and Muslim communities called on the government to establish a national women’s interfaith body to promote and protect the rights of women and youth.

The participants recognized the role that religious and traditional leaders play in their communities, and called on them to be advocates for women and youth, and to partner with the government.

“In places of worship, in the mosque, in the church, religious leaders play a vital role because what they tell their followers is what they will follow,” said Saratu Diyele Umar Kiro of the Kukah Centre. “Since they tend to obey what their religious leaders preach, why not use that medium to also preach good tidings to their people so they have peace and equality of the others in our communities?”

The participants agreed that the rights of women and children are often culturally, socially, religiously denied, and often, abuses are not reported due to stigmatization. Those present recognized that this is a key factor that contributes to inequality and conflict and have called on the government to include women in decisions making processes through an interreligious platform specifically by women and for women. They also called for an end to impunity for crimes against women, and stricter controls against hate speech and incitement to violence.

“Gone are the days when a woman sees herself as nobody. Or sees that she has nothing to contribute to society,” said Sister Sister Bridget Nwankwo of the Nigeria Sisters of St. Louis. “But a woman today has a lot to offer to society in peacebuilding by seeing that whatever is happening in the community, she is part of that decision making body.”

The recommendations drafted by the participants can be found below: