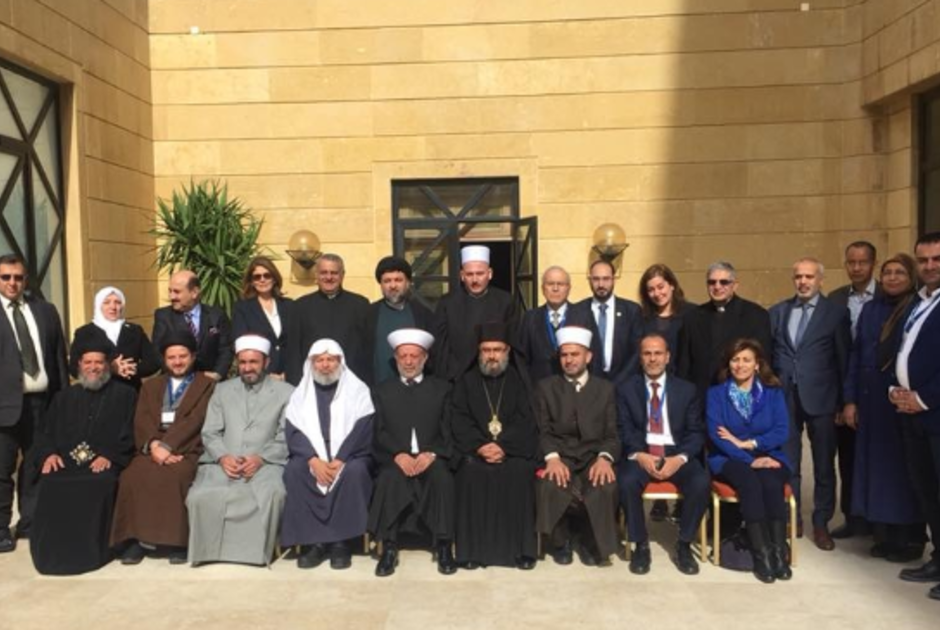 The Interreligious Platform for Dialogue and Cooperation in the Arab World (IPDC) was officially launched three years ago, in February 2018, during KAICIID’s “Promoting Peaceful Coexistence and Common Citizenship” conference. The platform was intended to focus and streamline efforts towards sustaining a culture of dialogue, coexistence and social cohesion in many parts of a region afflicted by divisions.

The platform gave structure and definition to the recommendations of the 2014 Vienna Declaration, issued by some of the region’s most prominent religious leaders and institutions, policymakers, dialogue practitioners, and individuals; offering interreligious pathways towards reconciliation and peace through dialogue.

Three years after the official launch of the KAICIID-supported platform, its role and relevance can be further highlighted in the context of two key regional developments in the field of interreligious dialogue.

Pope Francis is set to begin the first ever papal visit to Iraq on Friday, 5 March 2021, with a four-day trip that includes visits to Baghdad and Erbil. The 84-year-old pontiff’s trip stands not only as an act of solidarity with the country’s small but beleaguered Christian population, but will also amplify efforts towards interfaith dialogue with Iraqi Muslims.

The resolution, titled “Promoting a Culture of Peace and Tolerance to Safeguard Religious Sites”, was presented by the Kingdom of Saudi Arabia and on behalf of a number of other co-sponsors, including Egypt, Morocco, the United Arab Emirates, Iraq, Kuwait, Bahrain, Oman, Sudan, Pakistan and Yemen.

KAICIID Board Member Mohammad Sammak, Secretary-General of the National Committee for Christian-Muslim Dialogue in Lebanon, said the IPDC’s launch came at a crucial time for the Arab region: “When we in KACIIID decided to launch this initiative, Muslims and Christians were in need of a third group to bring them together… they needed an initiative of confidence… they needed a bridge between them, and KAICIID was that bridge.”

The Platform, a first for the region, launched with representation from 22 of the highest religious authorities, drawn from Muslim and Christian institutions across the Arab region and committed to working together to help rebuild and protect their communities from the effects of hate speech, divisive rhetoric, violence, and discrimination. The launch authorities pledged to jointly address the toughest challenges their communities face, by promoting values of common citizenship and helping to build trust among and between the diverse religious and cultural communities of the region.

In the three years since the platform’s launch, it has become a valued partner in KAICIID’s activities in the Arab world. The IPDC’s activities include training members from all religious communities to combat hate speech, implementing initiatives that empower youth and women, and working with local and national policymakers to promote social cohesion and equal rights.

“The establishment of the Interreligious Platform for Dialogue and Cooperation in the Arab World came to fill a gap of cooperation on a regional level. Through the platform’s initiatives in the Arab region, we have seen the joint work of religious communities effect a change in mindsets,” said KAICIID Secretary General Faisal Bin Muaammar. “There is an understanding that common challenges require shared solutions across religious and ethnic lines, to rebuild what has been broken. When a region shares a burden, it must also unite to alleviate it. That is what we do, we build trust and common citizenship that drive regional healing and reconstruction.”

He continued: “It is very important that the IPDC brings together some of the most important Christian and Muslim authorities in the region to play a pivotal role in linking religious leaders, religious institutions, policymakers and experts in the Arab region an effort to combat dangerous and divisive extremism.”

“The Interreligious Platform for Dialogue and Cooperation provides an essential set of tools for religious leaders, experts and policymakers who are engaged with interreligious dialogue and peacebuilding throughout the Arab region,” said KAICIID Senior Advisor Mohammed Abu-Nimer. “As the coronavirus pandemic has shown, hate speech and religious intolerance is on the rise around the world and on social media,” he continued. “The third anniversary of the IPDC highlights the numerous resources and training programmes we have deployed to support everyone working towards conflict resolution and peacebuilding.”

The IPDC acts as an umbrella organization for a number of key KAICIID programmes in the Arab region. This includes:

A common citizenship team for Iraq which brought together 30 leaders from religious institutions and civil society organizations, representing almost all of the religious and ethnic groups in Iraq. The team, which was created in 2018, includes members from Sunni, Shia, Christian, Yazidi and Baha’i communities. Its leaders initially met in Erbil where participants discussed ways of building an inclusive citizenship framework for Iraq. The group established the Common Citizenship Team at the national level to oversee the implementation of the platform’s key initiatives in Iraq.

The IPDC also supports the implementation of KAICIID’s Arab Region Fellows Programme, which attracts candidates from some of the region’s leading religious institutions. Currently, 130 Fellows have graduated from the programme and have implemented 56 initiatives in their communities to raise awareness about the role of dialogue in countering hate speech, promoting common citizenship, empowering women, and inspiring cooperation between religious leaders and policy makers for sustainable change.

KAICIID Fellow Heba Salah said: “One of the major goals of dialogue is to reach peace, and my project is a seed of peace…” She added: “Having my project among other IPDC projects gives it more value and comes as a source of encouragement to implement the planned steps. One of the important things to mention here is that promoting peace needs collective efforts and this is what the IPDC adds to my project.”

The IPDC is also home to KAICIID’s Social Media as a Space for Dialogue initiative, which is a portable training series that started in 2015. So far, 12 workshops have been concluded, equipping hundreds of young leaders in the Arab region with skills to combat online hate speech and extremism, while advocating inclusion, moderation, and building a base for communities that support each other in times of need. The graduates of this programme have launched and successfully run 20 transformative social media campaigns promoting diversity, cooperation for sustainable development, and mobilising local efforts for crisis response; including interreligious responses to help those most impacted by COVID-19, the Sudan floods, and the Beirut blast.

The IPDC also supports She for Dialogue, an empowerment project that engages 27 women from Saudi Arabia, Syria, Iraq, Lebanon, and Egypt in a one year training programme, where participants seek to establish international standards for interreligious dialogue, and establish national standards for common citizenship and countering hate speech. They also examine the use of social media as a means to enhance peaceful coexistence, and tackle relevant topics such as gender mainstreaming in the field of interreligious dialogue, and examine ways in which identity intersects with religion, ethnicity, culture, and nationality.

The IPDC acknowledges youth as essential partners in the region’s quest for peaceful coexistence and supports the Youth Forum for Interreligious and Intercultural Dialogue in the Arab Region, an accessible and safe space for young people from all religious, ethnic and cultural backgrounds to engage in dialogue. The Forum was established in December 2019 to identify strategic priorities for youth in interreligious dialogue, and to translate them into recommendations for action.

Most recently, the IPDC oversees the implementation of dialogue initiatives on regional and national levels as part of KAICIID’s Dialogue-60 project. So far, KAICIID and the IPDC have supported project leaders in implementing 27 training sessions and workshops, 24 dialogue sessions, and 6 awareness campaigns. Additionally, a mobile application is under development together with an interreligious art initiative. The initiatives have until now benefited 2833 people.

One of the Dialogue-60 project leads, Anita Sherim, said the IPDC’s role in helping her project has proven to be invaluable. “It is important to go out of the local community to bring ideas and try to change people and the society to the better,” she said. “KAICIID also helps us with motivation and daily follow-up management. We wish to continue our collaboration and we would like to go international with our work with IPDC.”

KAICIID’s Arab Region Programme Manager and the architect behind the IPDC, Waseem Haddad believes “the Platform represents an unshaken solidarity between the region’s religious communities, despite the hardships they have endured. Through its programmes and activities, it establishes a base for inclusive dialogue, interreligious education, crisis response networks, and much more. It is a beacon of light and hope for a better future based on authentic religious values like humanity, fraternity, and collaboration.”