Calligraphy in Dialogue: Opening of an Intercultural Art Exhibition at KAICIID 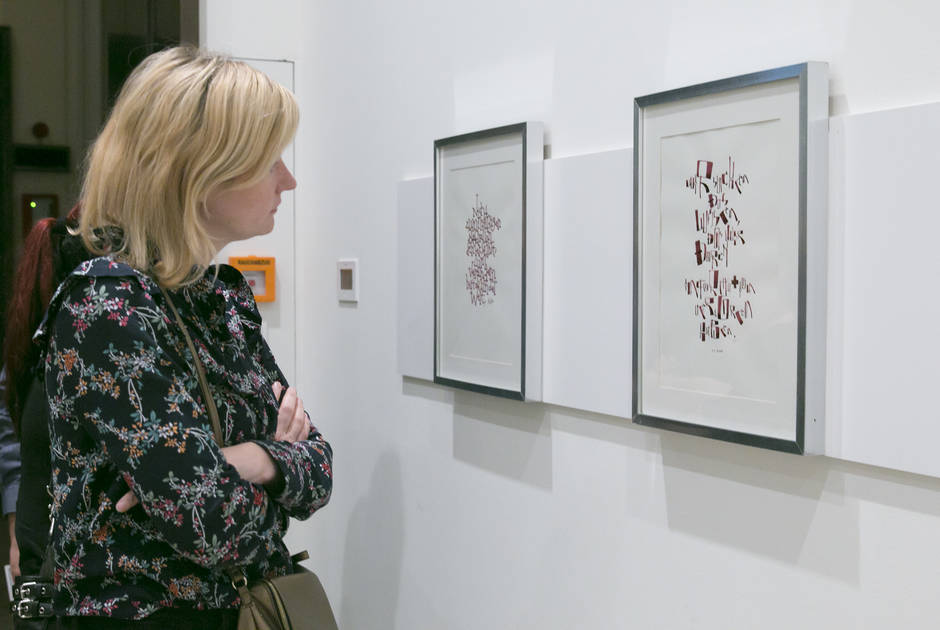 Vienna, 10 October 2017: In a new exhibition, the International Dialogue Centre (KAICIID) has brought together artists from three different calligraphic traditions. The exhibition opened this week with a performance by the artists Abd A. Masoud, Feng Yu and Thomas Hoyer creating Arabic, Chinese and Western calligraphy respectively.

The evening event was opened by the three calligraphers, who each introduced their respective traditions and explained the cultural traits of each tradition. Thomas Hoyer, an internationally renowned calligrapher from Germany, demonstrated what is artistically possible with Western calligraphy beyond the common clichés of medieval scripts and wedding invitations. To this end he wrote in calligraphic style a poem by the African American escaped slave, abolitionist and civil rights champion, Frederick Douglas, demonstrating how the message of a text can be better understood and strengthened through calligraphy.

Next, Abd A. Masoud presented what he refers to as ‘Arabic calligraphy from a different perspective’. Writing modern Kufic script, the artist uses Western writing utensils such as a drawing or a ‘cola’ pen instead of the traditional bourdon tube made of bamboo cane, making it more attractive to the ‘non-Arabic speaking’ viewer. Through this fusion of styles, he gives contemporary Arabic art a new dimension, without losing its ancient roots and maintaining the Arabic artistic heritage.

Chinese calligraphy was introduced by Feng Yu, a celebrated master calligrapher, who demonstrated three versions of the same poem by Li-Tai-Pe (701 – 762), one of the most prominent Chinese poets of the Tang dynasty, presenting the different, vibrant traditions within Chinese calligraphy.

To round off the intercultural journey around the globe, each performance was accompanied by music from the respective regions, including Western guitar, Arabic nay or flute, and Chinese violin.

The evening event exemplifies KAICIID’s mandate to promote intercultural dialogue; not withstanding linguistic and cultural differences, art is a universal language that can unite people. The art of calligraphy takes its strength not only from the act of reading but from simple observation without having to be able to read or understand the writing – presenting an intercultural dialogue without words.

The exhibition ‘Calligraphy in Dialogue’ is open to the public until 31 October at the KAICIID headquarters on Schottenring 21, Vienna, Austria, on week days daily from 10.00-18.00.

To receive invitations to our public events, send us an email at [email protected]