To Build a More Peaceful, Equitable, and Sustainable World, Interfaith Dialogue is Fundamental 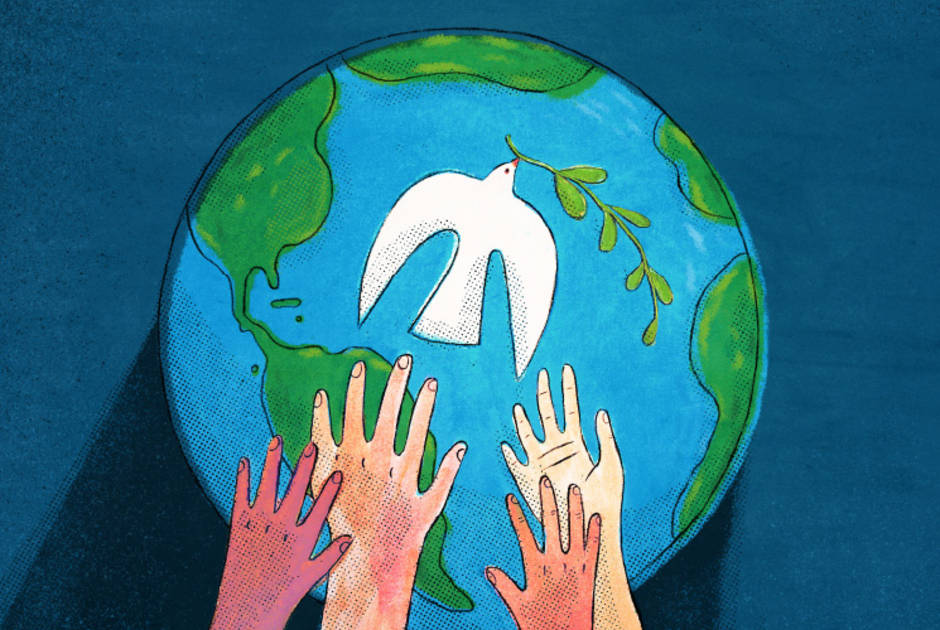 Marking this year’s International Day of Peace, an expert group of religious, cultural, and peace-building leaders today underscored the importance of interfaith dialogue in achieving a more equitable and sustainable future.

Observed on September 21, the International Day of Peace advocates for a world free of war and conflict. As the global pandemic begins to ease and the planet looks ahead to a post-COVID-19 era, this message of harmony has particular resonance.

Over the last eighteen months, it has been the most vulnerable communities that have suffered the greatest. With unequal access to healthcare, they have been less sheltered from the virus, while a rise in hate speech and discrimination has impacted them disproportionately. To make matters worse, there has been an increase in nationalism, authoritarianism, and intolerance globally.

“Peace is not passive, arising from a simple lack of conflict. Peace is active, transformative. It calls us to action on the host of fronts to be discussed today, on climate change, gender violence, and inequality and economic justice.”

Addressing these systemic issues requires collaboration — not least between religions and religious institutions. When faith leaders and their followers come together in cooperation, solutions to the most pressing common problems can be found. This has been illustrated during the pandemic, Bin Muaammar said, with religious leaders uniting worldwide to dispel dangerous conspiracy theories and encourage COVID-19-safe behaviours.

Panelist Sister Pai Ling Loh, a religious mediator and President of Malaysia Buddhist Consultative Council (MBCC), agreed that faith-based organisations have had a pivotal part to play during the global health emergency.

“Religious leaders have found themselves with an important role in terms of helping to put together a standard operating procedure that has helped adherents of different faiths find common ground.”

While faith leaders have been credited with helping increase immunization rates in religious communities, there remains an intractable problem around global vaccine inequality. While wealthy nations have been able to produce enough doses to protect large swathes of their populations, less developed and poorer countries have been left out in the cold.

As of September 15, more than 60% of people in high-income countries have received a vaccine, according to the Global Dashboard for Vaccine Equity, versus just 3% in low-income states. This cannot be allowed to continue, said David Fernandez Puyana, a celebrated peace, human rights, and gender equality activist.

“States should ensure that medicines are available, accessible, culturally acceptable, and of good quality. Developed states have a responsibility to [help poorer states] through international assistance and cooperation.”

This sense of responsibility feeds into a wider obligation to tackle the surge of discrimination, stigmatisation, and hated that has accompanied the pandemic. Achieving this requires focus on one vital area, Puyana said: education.

Building peace through scholarship is the overarching goal of the University for Peace, represented on the panel by Rector Francisco Rojas Aravena.

“On the International Day of Peace, we need to reinforce a culture of peace and nonviolence. Trust makes it possible to build cooperation, and trust is built through education,” Aravena said

With research and tuition, expertise can be developed that helps communities come together to meet common challenges — the greatest of which is climate change. The planet is warming at an alarmingly fast pace, putting pressure on natural resources and changing the way that land is used. In certain parts of the world, these meteorological changes are deepening sectarian divides, creating new tensions, and sparking bloody confrontation.

To reverse this trend, civil society organisations, policymakers, and religious groups must work together to seek out environmental solutions, the webinar heard earlier.

“We need to come together so that we can have a common language to help Mother Earth,” said Grand-Father T8aminik Rankin, former Grand Chief of the Algonquin Nation. “When Mother Earth suffers, we all suffer. Our Mother Earth is not a business, she needs her children for her healing,” he added.

Progress at the grassroots

Whether it’s combatting the effects of climate change or battling the ravages of COVID-19, grassroots collaboration is often the most effective form of activism. Inspiring, organising, and upholding local involvement and advocacy is often the job of faith leaders — a fundamentally important function, the webinar was told.

“If we really want to build peace in the world, we must start with the local [context],” said Dr Amjad Mohamed Saleem, a political scientist and programme manager at the International Federation of Red Cross and Red Crescent.

“Any solution for building peace has to start at the local level, and faith based organisations are part of that process,” he added.