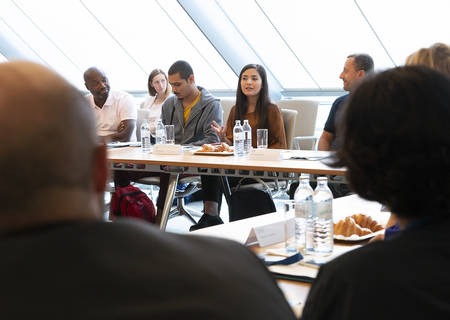 Vienna, 7 September 2018: The International Dialogue Centre (KAICIID) today received the recipients of the Austrian Federal Ministry for Europe, Integration and Foreign Affairs (BMEIA)’s Intercultural Achievement Awards. The award-winners heard from KAICIID experts about the Centre’s work in promoting dialogue, and presented their own projects.

The award is given out every year to innovative projects in intercultural dialogue that blaze new paths in using dialogue as a tool to solve concrete issues. Open to organizations all over the world as well as in Austria, the Intercultural Achievement Award recognises projects and organizations for their work in four categories: innovation, sustainability, recent events and media.

“The project brought together religious leaders, religious representatives, and journalists so they can work together to fight propaganda and “fake news”,” Dzyubanskyy said. “Religious communities have so many spiritual resources that can be used to make society better and make a more honest and transparent world.”