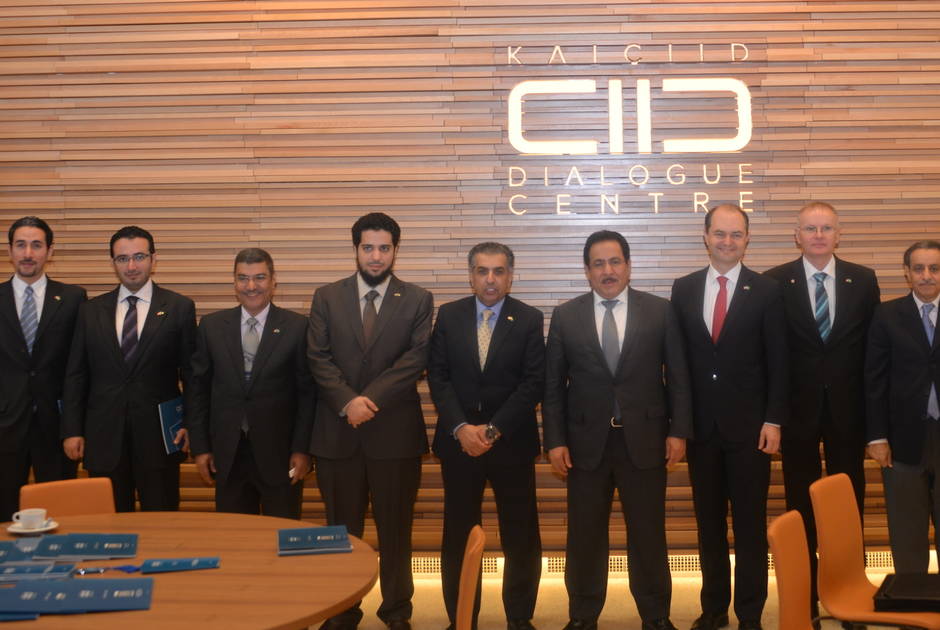 On Tuesday 4 February, led by H.E. Gregor Koessler, Austrian Ambassador to Oman, Saudi Arabia, and Yemen, a group of representatives of the newly formed Saudi-Austrian Business Council (SABC), an initiative to broaden the bilateral trade prospects of businesses in both countries, visited KAICIID. The 14-member delegation is undertaking a weeklong exploration of collaborative opportunities with commercial, academic and social institutions in Vienna. Following a tour of the Centre’s headquarters, PalaisSturany, led by the KAICIID Secretary General, informal discussions were held on the potential for future collaboration between KAICIID and the SABC. Afterwards, Mr. Muaammar remarked, “Our two organisations are examples of how cooperation across borders and cultures is not only possible, but essential to so many fields across today’s global landscape. I commend the Austrian Chamber of Commerce and the Saudi Council of Chambers on this terrific initiative that strengthens links among diverse cultures and promotes mutual understanding. KAICIID strives towards the same through dialogue.” Background Founded in 2013, the Saudi-Austrian Business Council (SABC) is a joint initiative by the Austria Chamber of Commerce and the Saudi Council of Chambers to provide support and strengthen co-operation links between Austrian and Saudi Arabian companies. The Council conducts regular meetings and hosts joint events where members can exchange experiences.

Representatives from Vienna’s religious communities and the City of Vienna’s Integration and Diversity agency met at the King Abdullah Bin Abdulaziz International Centre for Interreligious and Intercultural Dialogue (KAICIID) in Vienna. During their meeting, the group outlined plans for 2014 diversity activities in Vienna’s 3rd District, such as opportunities for neighbours to get to know one another and experience their respective cultures and customs. KAICIID hosted this meeting as part of the Centre’s commitment to bring together stakeholders, experts and policymakers to enliven interreligious dialogue and promotes intercultural understanding.A number of local outreach initiatives are scheduled by the Dialogue Centre for 2014. Speaking after the meeting, KAICIID’s Head of Initiatives, Mike Waltner, said, “Vienna is not just KAICIID’s home, it is also one of Europe’s most diverse and international capitals. KAICIID is keen to explore ways to support the work of different interreligious groups who are our neighbours here in the city.” The visiting delegation included Father DariuszSchutzki, Episcopal Vicar for the City of Vienna, who added: “We are really keen on holding more of these kinds of conversations in the future, to support neighborliness and engagement. I'm grateful to KAICIID for facilitating this gathering and for taking practical steps to demonstrate its interest in engaging the city’s religious communities.”