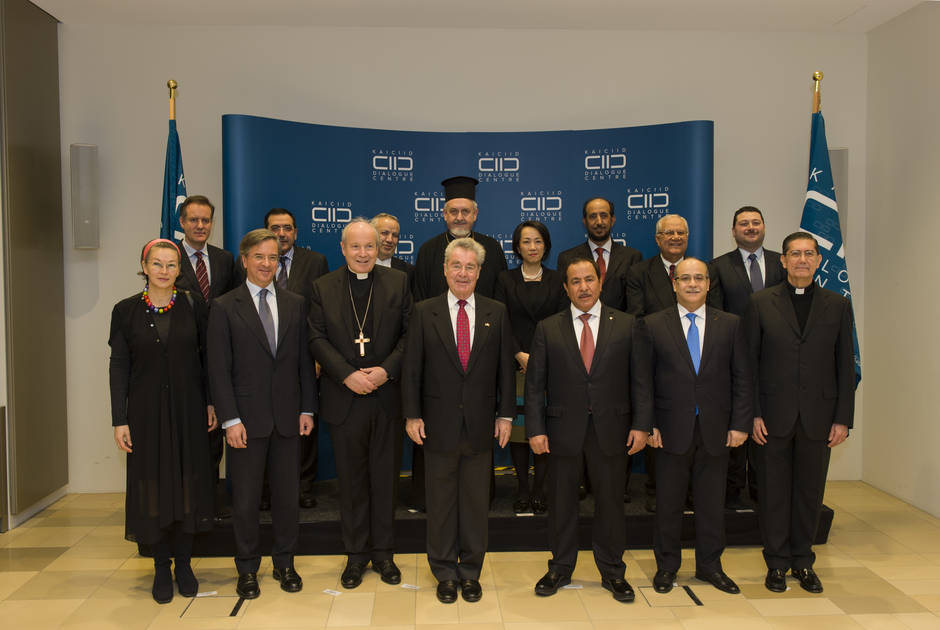 Speaking at the International Dialogue Centre (KAICIID) yesterday, the Federal President of the Republic of Austria, Dr. Heinz Fischer emphasized the importance of dialogue in ensuring peaceful coexistence, which is an essential requirement for the existence of future generations.

“I consider dialogue, being open to discussion, and the ability to engage respectfully with other viewpoints (even when one does not share them), to be a basic requirement for peaceful coexistence between people, communities, cultures and religions.”

The President was speaking on the occasion of World Interfaith Harmony Week, which is celebrated every year in the first week of February. He was joined at the event by the Secretary General of KAICIID, Faisal Bin Muaammar and the Ambassador of the Hashemite Kingdom of Jordan to Austria, His Excellency Ambassador Hussam Al Husseini.

The KAICIID Secretary General welcomed the representatives of religious and diplomatic communities at the event: “We are governed both by policymakers and by religious leaders: for this reason, no single religion, and no single nation determines our programmes. It is my belief that dialogue is the best way to foster the mutual respect that builds peace.

The President traced the roots of several current international conflicts to the manipulation of nationalism, ideology, and power to marginalize individual rights, or the rights of the weaker sections of society. In order to bridge the mistrust, or oppression, of those of other religions and cultures or nationalities, he said, “voices of reason, signals of moderation and willingness to talk are needed.”

He emphasised that KAICIID exists to serve these goals. As a platform for interreligious dialogue, as a bridge builder in interreligious and intercultural dialogue, it can seek to be a cosmopolitan, open, international dialogue partner. Its work and mandate, as laid out in the establishment agreement, strengthen cooperation and mutual respect at the international level, and promote a tolerant exchange of views between religious communities.

“KAICIID is the only international organization to work together on an equal footing with leaders of the five major world religions. The center has the potential, through its work, to create a better understanding between religions and thereby make an important contribution to the development and advancement of human rights,” he said.

In his lecture, President Fischer stressed that Austria’s longstanding record of promoting dialogue between religions and cultures has been a valuable asset in recent times. The war in Syria has triggered the largest wave of refugees since World War II, and Austria has received one of the highest number of refugees per capita in Europe. As the refugee crisis makes it necessary for countries to quickly and effectively integrate large numbers of people from other religions into their own societies, the practical importance of interreligious dialogue becomes clear.

“The long-term integration of these people (refugees) into our society is a major challenge. I would like to reiterate that Muslims who live in Austria can and should, be a valuable part of our society. It is possible to be a good Muslim and a good Austrian simultaneously.”

“The integration of refugees in Austria in the coming years will increasingly need to be part of the dialogue between religions. The inclusion of vulnerable people is a serious, societal responsibility that needs to be carefully and knowledgeably executed with a view to securing social cohesion and social peace in Austria. That (this) will also entail problems cannot be denied. But would we not make the effort, we would have far bigger problems.”

In his welcoming words, the KAICIID Secretary General, Faisal Bin Muaammar described how the International Dialogue Centre works to support the integration of refugees into Austria:

“If refugees are to return to peaceful homes, or to integrate into new circumstances, then we must find a way to help people accept and not fear differences.

Dialogue helps us achieve this. In dialogue we recognize that we are all equals and share core values.

Austrian religious communities have shown great commitment and resolve in supporting the integration of refugees here in Austria.

We are trying to do our part to support these efforts, by providing religious communities the means to help more refugees.”

His Excellency Ambassador Hussam Al Husseini explained the origins of World Interfaith Harmony Week as a Jordanian initiative which was adopted by the United Nations General Assembly and is now celebrated worldwide. He also thanked the International Dialogue Centre for its work in promoting dialogue and described Vienna as a global centre for dialogue. 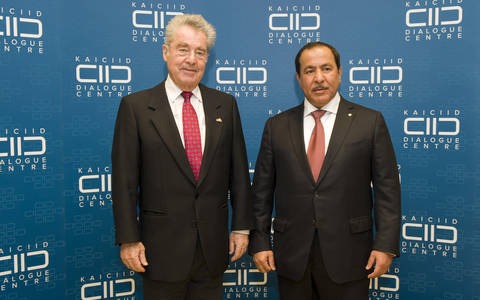