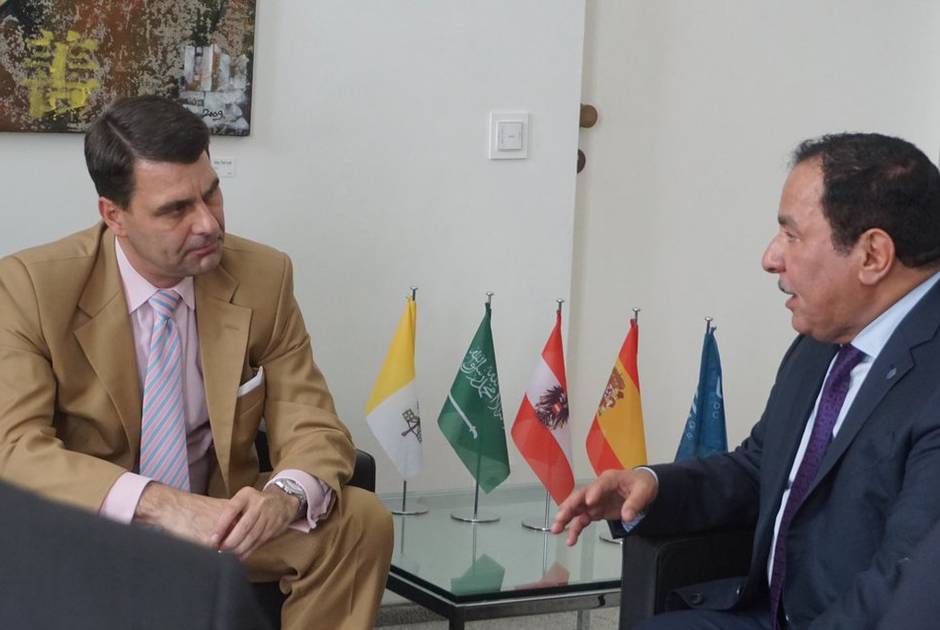 H.E Ambassador Dr. Johannes Peterlik was welcomed for the first time to the headquarters of the International Dialogue Centre (KAICIID) on 1 August 2018 by KAICIID Secretary General Faisal Bin Muammar. Following his appointment on 1 June 2018, Amb. Peterlik chose KAICIID as the first among the many intergovernmental organizations he will be visiting in Vienna.

The Austrian Ministry of Foreign Affairs delegation, including Dr. Marcus Bergmann, Dialogue of Civilizations and Scientific Cooperation, and Mr Christoph Girbinger, received a briefing from KAICIID Deputy Secretary General Ambassador Alvaro Albacete and KAICIID Director General Fahad Abualnasr, as well as senior staff on the Centre’s activities, including the work carried out by the Centre to support interreligious platforms in the Arab region, CAR, Nigeria and Myanmar. The visiting delegation were also briefed about the work of the Centre with multilateral partners, including the United Nations, the African Union, and European Union institutions.

Amb. Peterlik noted the importance of the role of interreligious dialogue in denouncing terrorism, extremism, and violence in the name of religion, as well as in strengthening religious freedom and human rights. He stated that Austria took pride in its role as one of the Centre’s founding States, as well as its host country. Further, Amb. Peterlik underscored Austria’s support for the expansion of the Centre’s membership, which Secretary General Bin Muaammar wholeheartedly reiterated.

Secretary General Bin Muaammar thanked Deputy Foreign Minister Peterlik for Austria’s steadfast support for dialogue and the Centre, and expressed his intent to contribute towards Vienna’s well-deserved reputation as the global home for dialogue. Both agreed to seek means to further strengthen cooperation in order to increase the positive benefits of dialogue.