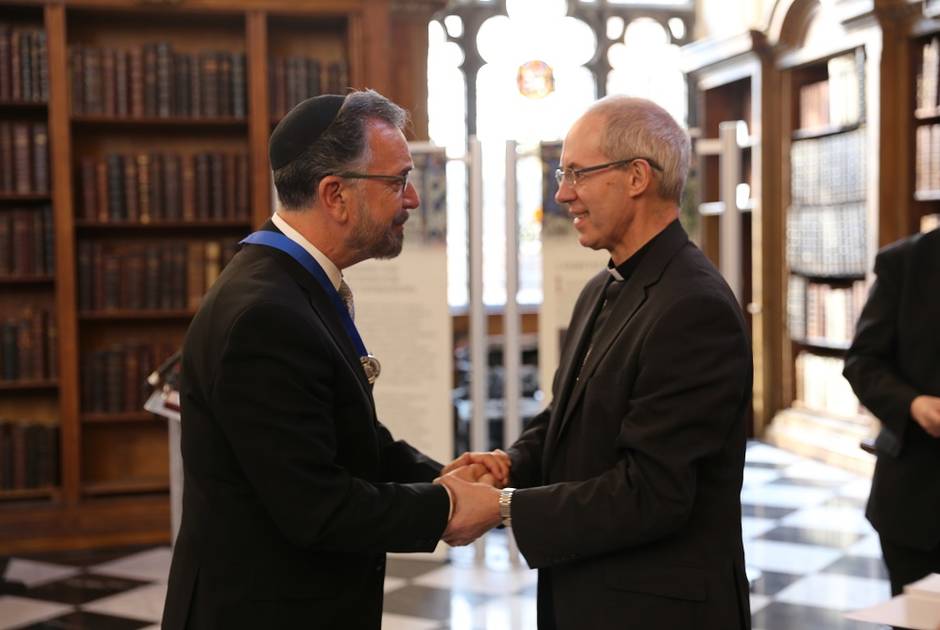 KAICIID Board Member Rabbi David Rosen received the Hubert Walter Award for Reconciliation and Interfaith Cooperation from Archbishop of Canterbury Justin Welby at a ceremony at Lambeth Palace on 31 March 2016.

The award recognizes those who have made an outstanding contribution in the areas of reconciliation and interfaith cooperation.

The award recognizes Rabbi Rosen’s contribution to the work of interreligious relations between, particularly, the Jewish and Catholic faiths.

The Hubert Walter Award for Reconciliation and Interfaith Cooperation was first awarded by Archbishop Justin Welby in March 2016. It is named after Hubert Walter, Archbishop of Canterbury from 1193 to 1205, who had dialogue with non-Christians. Its design incorporates a scarab beetle, a motif favoured by Archbishop Walter.

The award forms part of a new suite of awards consisting of three existing Lambeth Awards – the Lambeth Cross, the Canterbury Cross and the Cross of St Augustine – and six new awards named after previous holders of the office of Archbishop of Canterbury.

Rabbi Rosen has been involved with a plethora of key interfaith roles, including chairman of the International Jewish Committee on Interreligious Consultations, the broad-based coalition of Jewish organizations representing World Jewry to other religions.  His current contribution to interfaith engagement is profound: he is an International President of Religions for Peace; Honorary President of the International Council of Christians and Jews; and serves on the Executive of the World Council of Religious Leaders (WCORL). He is a member of the Board of Directors of the King Abdullah Bin Abdulaziz International Centre for Interreligious and Intercultural Dialogue (KAICIID).

Rabbi Rosen has served as a member of the  Advisory  Committee  of  the  World  Congress  of  Imams  and  Rabbis  and  of  the  World Economic  Forum's  C-100,  a  council  of  100  leaders  formed  for  the  purpose  of  improving relations and cooperation between the Muslim and non-Muslim worlds.

29 August 2016
“There is No Relationship Beyond the Capacity for Transformation”: KAICIID Board Member Chief Rabbi Rosen to S. Africa Newspaper
25 February 2016
Chief Rabbi David Rosen speaks at Vatican conference
END_OF_DOCUMENT_TOKEN_TO_BE_REPLACED