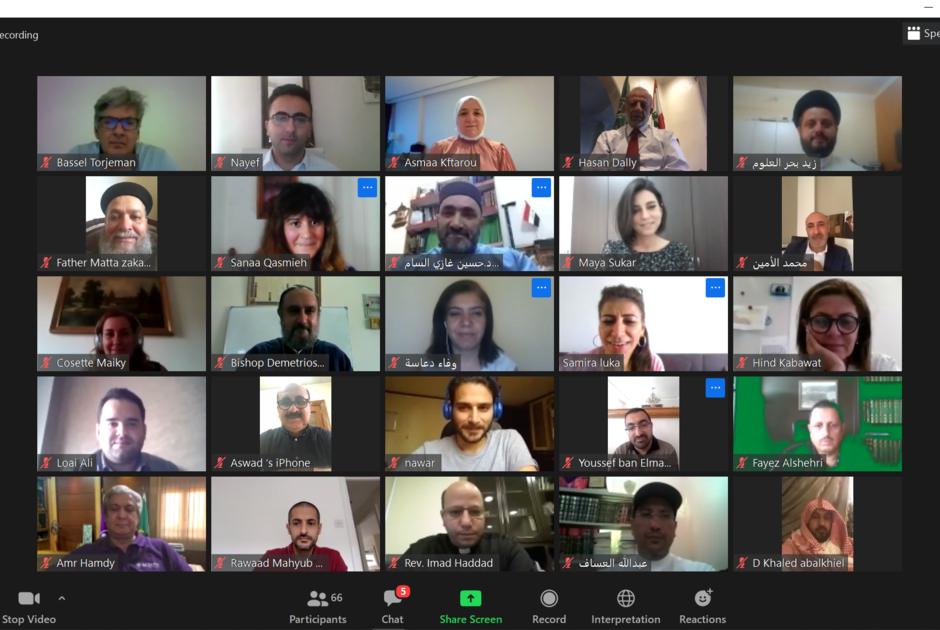 Prominent policy makers from the Arab region, religious leaders, social cohesion experts and environmental specialists met virtually for the second time on 3 July to present recommendations to be included in a programme ahead of the G20 Interfaith Forum, scheduled to meet in Riyadh, Saudi Arabia in October. The International Dialogue Centre (KAICIID), with key partners the G20 Interfaith Forum Association, the United Nations Alliance of Civilizations and Saudi Arabia’s National Committee for Interfaith and Intercultural Dialogue are jointly supporting the consultations, which will help shape a final series of recommendations to world leaders attending the G20 summit, scheduled to take place in Riyadh in November.

The virtual meeting heard recommendations from three working groups charged with examining how to strengthen social cohesion and promote peaceful coexistence in the Arab Region, as well as the role of religious institutions in areas of governance and faith. A final working group examined how faith-based organisations can better protect the environment in the wake of global warming.

“Helping religious institutions reach decision-makers does not mean the worlds of religion and politics have a right to interfere in each other’s business. The role we are entrusted with is an advisory one to support institutions in building bridges with stakeholders so as to strengthen their role as part of the solution,” said Faisal Bin Muaammar, KAICIID Secretary General.

In a statement coinciding with the 3 July meeting, Miguel Moratinos, the High Representative for UNAOC, said:

“Religious leaders and faith-based organizations play a unique role in bringing people together around the common values of our shared humanity. Solidarity, compassion and unity should be promoted both within and between communities of faith. During the COVID19 pandemic, faith actors’ engagement with their respective constituencies helped in disseminating science-based information and guidance in accordance with UN policies and frameworks and national governments’ guidelines. Their role is needed more than ever before.”

The meeting, co-organised by the KAICIID-supported Interreligious Platform for Dialogue and Cooperation in the Arab Region (IPDC), drew on inputs from experts from Algeria, Egypt, Iraq, Jordan, Lebanon, Morocco, Palestine, Saudi Arabia, Syria, and Tunisia. It culminated in dozens of recommendations specific to the Arab Region.

In discussing how to strengthen social cohesion in the Arab Region, delegates stressed the importance of supporting the capacity of institutions to help vulnerable groups overcome the social and economic dimensions of conflicts that have intensified due to the COVID-19 pandemic.

Other suggestions included the strengthening of legal and policy frameworks in the Arab Region to prevent violence in the name of religion, and enhanced communication with policy makers to counter hate speech and promote solidarity, regardless of religious, cultural or ethnic identity. Those attending also called on United Nations organizations to coordinate with and accept religious institutions as key partners in protecting the rights of refugees. Participants in the consultation included Masahel Shalhoub of the King Abdulaziz Center for National Dialogue and Dr Yousef Bin Al Mahdi, a 2018 KAICIID Fellow from Morocco.

“We call for social protection and the respect of human rights especially for the most vulnerable people, or the most vulnerable groups in society, and displaced people, youth and women,” said Cosette Maiky, a social cohesion expert from Lebanon. “We need more education, the empowerment of women and youth, and action plans, laws and regulations in order to foster social protection.”

Recommendations on how religious groups can strengthen the links between governance and faith included enhancing communication between policy makers and citizens to establish participatory decision-making at local and national levels. Acknowledging the power of media and social media, attendees also called for the building of long-term partnerships with media outlets to help ensure that their message is spread more evenly demographically and geographically. Also integral is the building of capacity among religious institutions to harness social media as a platform for communication and messaging.

Recommendations to protect the Earth from the effects of climate change were high on the agenda. According to one recent report, carbon dioxide emissions at the height of the COVID-19 pandemic plunged by a global average of 17% in April, compared with last year, but have since surged again as economies emerge from  lockdowns. The report also said the world has only six months to prevent a post-lockdown rebound in greenhouse gas emissions that would overwhelm efforts to stave off irreversible environmental damage.

The environmental working group included Dr. Iyad Abumoghli, director of the United Nations Environment Programme (UNEP) Faith for Earth Initiative, and Dr. Lara Hanna-Wakim, of the Faculty of Agricultural and Food Sciences at the Holy Spirit University in Kaslik, Lebanon.

Recommendations on protecting the environment included encouraging the creation of faith-based organizations dealing with climate action and environmental sustainability, encouraging the redirection of investments by religious-affiliated financial and other institutions to environment-related projects and highlighting the role religions must play in environmental stewardship. Other recommendations included encouraging Arab region inhabitants to protect and conserve available resources and enhancing cooperation between ministries and government institutions to address environmental challenges, especially the pollution of air, soil, and water. “There is a lack of environmental awareness among citizens in the region,” said Gaby

Hashem, Director of theological and ecumenical affairs at the Middle East Council of Churches in Lebanon. “One of the most important challenges is raising awareness in schools so (education) is based on cultural and scientific facts and not on a religious basis. “We have the climate change and greenhouse effect which is an urgent global challenge and which many define as the number one challenge globally,” he continued. “It needs the attention and cooperation of governments and civic society organisations to address it and fight it.”