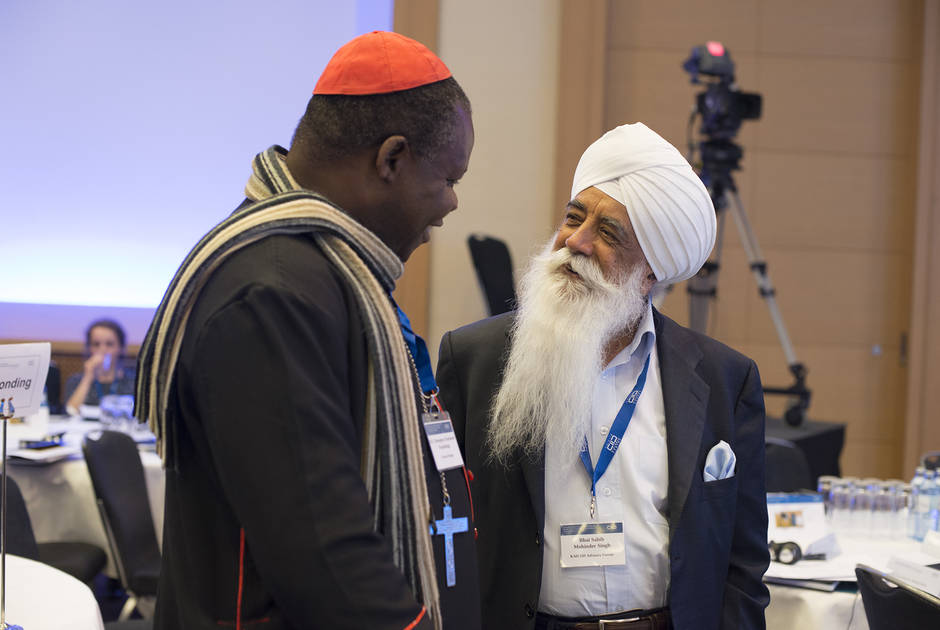 ​​Riyadh, Saudi Arabia, 5 Oct., 2020 – The G20 Interfaith Forum, a leading organization focused on bringing faith and policy together, today announced plans, participants and highlights for its seventh annual G20 Interfaith Forum to be streamed virtually from Riyadh with leaders from across the globe on Oct. 13 to 17, 2020.

More than 500 leaders and representatives from several of the world’s major religions and global policy institutions will participate and address crises, including the COVID-19 pandemic, climate change, disaster risk reduction, hate speech and racism. In addition to attracting leaders from most major world religions, denominations and interreligious organizations, the G20 Interfaith Forum will include representatives from the United Nations, the International Dialogue Centre (KAICIID), the Organization of Islamic Cooperation), the World Muslim League, and the European Commission.

The G20 Interfaith Forum seeks global solutions by collaborating with religious thought leaders and political representatives and calls upon the world’s political leaders to include religious actors in the policymaking process leading up to November’s 2020 G20 Leaders’ Summit in Riyadh as well as to build policy based on shared values of solidarity, coexistence and respect.

“The seventh annual G20 Interfaith Forum represents the culmination of a yearlong process of consultation that has brought together more than 500 representatives of religious and faith-based organizations, international and national policymakers and experts in six regional meetings,” said Professor Cole Durham, President of the G20 Interfaith Forum Association and Founding Director of the International Center for Law and Religion Studies. “At each meeting, participants focused on global policies and highlighted relevant actions the G20 leaders and religious communities should consider at the G20 Interfaith Forum. This forum convenes the global religious community at precisely the most opportune moment, as the world faces an unprecedented combination of interrelated challenges.”

Recommendations from these meetings and of continuing task forces on priority topics will be presented to the G20, which is chaired this year by the Kingdom of Saudi Arabia.

The five-day G20 Interfaith Forum conference is open to the public and will be streamed at www.G20Interfaith.live. Sessions will focus on ways religious leaders can work with governments to combat racism and hate speech; contribute to the advancement of migrants, refugees, women and youth; address the issue of modern slavery and human trafficking; protect shared religious and cultural heritage; and mitigate the consequences of environmental degradation and climate change.

An entire day of the program will be dedicated to discussing the COVID-19 pandemic as religious communities are both uniquely affected by the pandemic: being scapegoated for rising infection rates in many parts of the world, on the one hand, yet also leading in the provision of aid for those affected by the pandemic and the social inequities it has exposed on the other.

Leading participants include the following:

To register and for a complete program with a schedule of topics, speakers and sessions times, visit g20interfaith.live

The G20 Interfaith Forum seeks to raise awareness of the role of religious organizations and faith-based organizations in the implementation of the United Nations Sustainable Development Agenda 2030, a comprehensive list of 17 Sustainable Development Goals that seeks to ensure that every person has access to the basic necessities of life: health, education, water, security, equality and a clean environment.

“The potential of religious communities as a partner for policymakers often goes unrecognized. The G20 Interfaith Forum seeks to network these religious communities with each other and with policymakers so that their voices can be heard and their contributions amplified. KAICIID is proud to be part of this process, as part of its ongoing commitment to supporting interreligious dialogue around the world,” said Faisal Bin Muaammar, KAICIID Secretary General.

“More than eight-in-ten people identify with a religious group worldwide. In this context, religious leaders have an important role to play in strengthening cohesive and inclusive societies,” said Miguel Ángel Moratinos, High Representative for the United Nations Alliance of Civilizations (UNAOC). “As one of the leading United Nations entities in the fields of interreligious and intercultural dialogue, UNAOC supports the G20 Interfaith Forum as it provides a vital platform for religious leaders and other actors to address pressing social issues.”

"As the host country of the G20 Summit, and the land of Two Holy Mosques in Mecca and Medina, the Kingdom of Saudi Arabia has always supported the efforts of religious leaders from different religious traditions and policy makers to tackle global challenges in a spirit of tolerance and mutual respect” said Dr. Abdullah Alhomaid, the Secretary General of the National Committee for Interfaith and Intercultural Dialogue (NCIRD).

The G20 Leaders’ Summit brings together world leaders to discuss international economic cooperation. The participants in the G20 Summit are Heads of State or Government from 19 countries and the European Union. In addition, leaders of guest countries and representatives of invited regional and international organizations participate in the Summit.