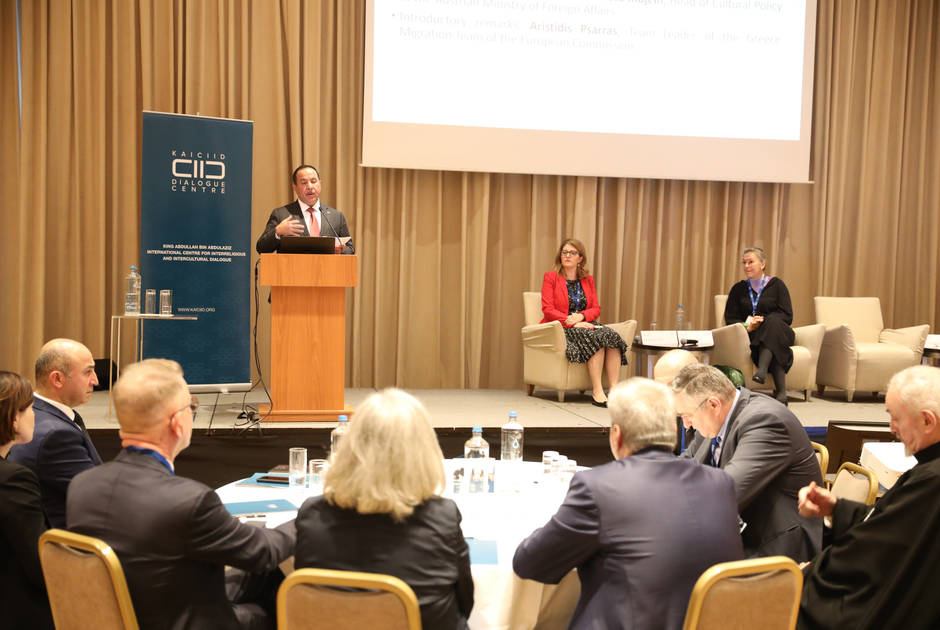 Participants at the 1st European Policy Forum on Refugees and Migrants called for faith-based and secular institutions to coordinate an urgent response to rising displacement, in order to uphold the fundamental dignity and rights of people seeking refuge.

Held in Athens Greece from 20-21 October, the first annual conference brought together grassroots activists from the KAICIID-supported “Network for Dialogue”, as well as policymakers, religious leaders and academics working on the social inclusion of refugees and migrants in Europe. Around 60 international participants discussed the challenges of effective integration both on the ground and at the policymaking level, under the theme of “Understanding current challenges of refugees and migrants in Europe: What can we do?”.

KAICIID Secretary General Faisal bin Muaammar highlighted the tremendous challenges that the Forum’s host country has faced, since it serves as a main point of entry for refugees and migrants in Europe.

“Greece, a country known for its ancient tradition of hospitality to foreigners, has witnessed a 200% increase in the number of refugee arrivals over recent months. However, we tend to become so dulled by numbers and figures that we forget the human stories behind them”, he said.

According to October 2019 reports by UNHCR, the number of refugees in camps on the Greek Aegean islands has climbed to over 30,000, with overcrowded reception centres and a shortage of housing and medical care.

“Greece, and other Southern European countries need our solidarity, but our solidarity and support is needed even more by those who are arriving at Europe’s shores, in search for a safe haven, carrying nothing but a backpack full of dreams”, Secretary General Muaammar said.

Dr. Erin K. Wilson, Director of the Centre for Religion, Conflict and the Public Domain at the University of Groningen, added that religious and secular institutions had a duty of care to ensure human rights for those fleeing hardship and persecution.

“Fear is an essential part of the politics of displacement. Part of that process means that some lives are deemed more disposable than others. These are two of the biggest challenges that we face in the discourses and policy implementation around displacement,” she said, calling on participants not to let fear drown out the concept of shared humanity.

Speaking on behalf of Austria, one of the founding members of KAICIID, Ambassador Teresa Indjein added that although “fear is a political currency, dialogue is too.” Quoting KAICIID Senior Adviser Patrice Brodeur, she said: “When dialogue is practiced as a means to build peace, it can lead to better regarding views, knowledge, and perceptions and enhance quality of dialogue.”

Representing the European Commission in Greece, Aristidas Psarras presented recent data on the refugee movement and migrants in Europe, underlining the relevance of this issue for the future of the European Union. He discussed the situation of unaccompanied minors, the EU’s support to Greece, integration as a “necessary investment” and the opinion of EU citizens regarding migrants and refugees, among other topics.

Finding ways to support both host countries and people seeking refuge has been a key focus for KAICIID since Europe’s migrant crisis in 2015. The Centre’s Programme for the Social Inclusion of People Seeking Refuge operates “with the conviction that through dialogue it is possible to achieve a two-way integration between host communities and the newly arrived,” Secretary General Muaammar said.

The programme’s specially designed Toolkit is designed to help integrate newcomers into all aspects of their host country – including language-learning, opportunities for training and education, and increased understanding of community and cultural expectations.

The Forum also served as the ideal venue to officially launch the “Booklet of Promising Practices for the Integration of Refugees and Migrants in Europe”, the first joint publication of the KAICIID-supported Network for Dialogue. Presenting the initiatives of the network members, the publication offers concrete examples of how using interreligious dialogue in the social inclusion processes of migrants and refugees can connect local actors of faith-based and secular organizations, scholars and practitioners.

As part of the Forum, policymakers and grassroots actors engaged in round table discussions designed as spaces to share different perspectives and to find more effective ways to cooperate.   Topics included the growing diversity and complexity of migration flows, migration dynamics, the need for new and different approaches in the field of integration, and the extent to which academic research and grassroots experience can contribute to the work of policymakers.

Prof. Miriam Diez Bosch, Director at the Blanquerna Observatory on Media, Religion and Culture at the University Ramon Llull in Barcelona, is one of the network members who particularly appreciated the chance to share best practices and hear from different perspectives.

“To me, the Policy Forum is a platform that brings together people who are really concerned about the topic that they deal with and who are aware that all issues related to it should be dealt with locally, nationally and globally. Here we are not just talking about refugees, we are talking about the work that we do with refugees. I believe this is what makes this event successful”, she said.

The 1st European Policy Forum was preceded by the 3rd meeting of the KAICIID-supported “Network for Dialogue”, which is made up of representatives from faith-based and secular organizations at the local, national, and international levels. Previous network meetings took place in Bologna, Italy, and Hinterbrühl, Austria.