“Religion is not imaginable without responsibility”: Cardinal Schönborn at KAICIID 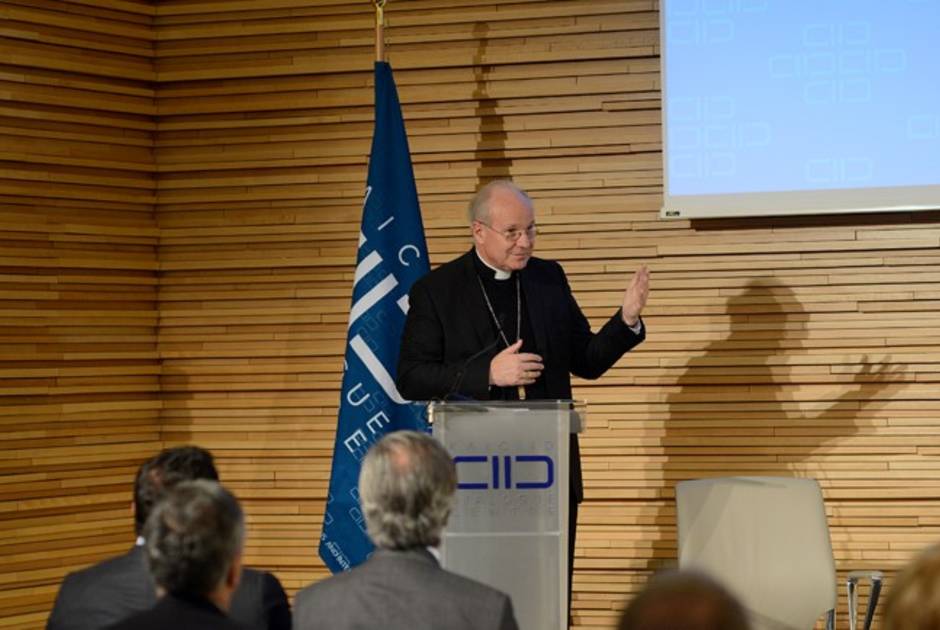 Cardinal Christoph Schönborn, O.P., the Archbishop of Vienna, explained at the International Dialogue Centre (KAICIID) the potential of interreligious dialogue for peace. "In many religions, we believe that we have after this earthly life to give account of our life. That there will be a judgement about what we have done. Religion is not imaginable without responsibility. A common responsibility for the common good.

“I think that we will not be judged about our religion but about the question: what did you do for justice in the world? For the hungry? For the refugees? For the poor, the needy? What have you done for the ecological needs of our planet?  This is a common responsibility and about this common responsibility we have not only to talk, we have to work together”.

Cardinal Schönborn held on 19 November the opening speech of the panel discussion “Nostra Aetate in Our Time: Interreligious Relations 50 years after the Second Vatican Council,” which convened representatives of religious communities in Austria and KAICIID’s Board of Directors at the International Dialogue Centre. During the event, the Cardinal also referred to recent attacks in Paris, Beirut, Africa and Asia. “This is not the way,” he said. “Humanity is but one family. This is the very simple and first reason why dialogue is necessary, because neighbouring each other, we have to speak to each other.”

His Eminence also discussed three arguments from the Nostra Aetate Declaration to illustrate the necessity of interreligious dialogue: we all live in one world and humanity forms one family; the spark of the divine lives in all of us; and we share a common responsibility for the common good. These three reasons, he said, were “sufficient to support the efforts of KAICIID for interreligious dialogue and intercultural dialogue.”

KAICIID Secretary General Faisal Bin Muaammar referred to the Declaration as a milestone that redefined the Roman Catholic Church’s relationship with other religions. He recognised it was “an achievement that deserves recognition, because interreligious dialogue can tackle some of the great challenges the world faces today.”

“Our global dialogue is incomplete without the religious leaders and communities. We need to include the wisdom of religious people to promote dialogue as a means of building peace,” the Secretary General said. He explained how the Centre owes its establishment to the vision of two religious leaders: the late Custodian of the Two Holy Mosques, King Abdallah bin Abdul Aziz, and His Holiness Pope Benedict the Sixteenth.

“It was King Abdallah’s vision to implement interreligious and intercultural dialogue between believers of different religions and traditions to enhance peaceful coexistence. Following that vision, with the support of our member States and the Holy See as the Founding Observer, KAICIID is trying to build bridges across the world”.

During the symposium, the speakers discussed the ecumenical perspectives of the Declaration, its impact on the Abrahamic religions and the future of interreligious dialogue. The multi-religious speakers included KAICIID Board Members Fr. Miguel Ayuso, Swami Agnivesh, H.E. Metropolitan Emmanuel, Dr. Seyyed Ata’ollah Mohajerani, Reverend Kosho Niwano, Rev. Mark Poulson, Chief Rabbi David Rosen and Dr.Mohammad Sammak. They were joined by Bhai Sahib Mohinder, Singh mukhi-Sewadar of the Guru Nanak Nishkam Sewak, Prof. Ingeborg Gabriel, Head of the Institute for Social Ethics of the University of Vienna, and Prof. Susanne Heine, of the Institute for Practical Theology and Psychology of Religions of the University of Vienna.

The speakers agreed on the importance of Nostra Aetate as a ground-breaking statement for interreligious dialogue. They highlighted the need to continue promoting dialogue and collaboration among the followers of different religions, with the aim of addressing the challenges of an increasingly diverse and rapidly changing world. In particular, they emphasised the potential of interreligious dialogue for peacebuilding in the context of increasing violence in the name of religion.

The KAICIID Board of Directors had recently called for solidarity in the aftermath of Friday night's terrorist attacks in Paris.

Nostra Aetate (“In our Time” in Latin) is the Declaration of the Relation of the Church to Non-Christian Religions, proclaimed by His Holiness Pope Paul VI on the 28th of October 1965. It was passed by an assembly of bishops during the Second Vatican Council, which ran between 1962 and 1965 and which addressed the changing place of the Catholic Church in the modern world. It has had a major impact in promoting dialogue between Judaism and the Catholic Church, and to a lesser extent, between the Vatican and other religions.

Conference
Board of Directors