‘Religions in Dialogue”: Lecture on the Reconstruction of the Golden Lyre of Ur 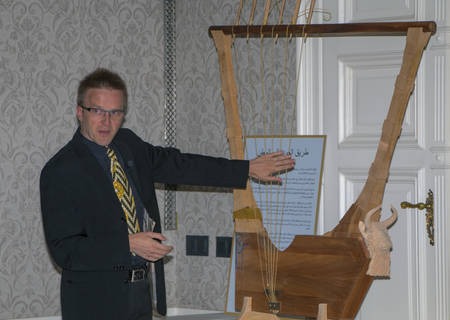 An innovative prizewinning peace project was introduced at the International Dialogue Centre’s (KAICIID) latest ‘Religionen im Dialog’ (Religions in Dialogue) open-house lecture. Florian Warum introduced the German-speaking audience to the multicultural project: ‘The Reconstruction of the Golden Lyre of Ur‘. The lyre is an ancient precursor of the modern harp.

The 4,700 year-old Golden Lyre of Ur was rediscovered in the 1930s in the course of archaeological excavations at the Royal Cemetery of Ur in Iraq, the birthplace of Abraham, the patriarch revered in Judaism, Christianity and Islam. The Sumerian lyre, bearing a bullhead symbol, was displayed the Iraqi National Museum in Baghdad, before being completely destroyed in 2003 when the museum was plundered.

A group of craftsmen started to meticulously reconstruct the ancient instrument and have in the meantime gained considerable attention with their project, including recognition in their nomination for the 2015 Austrian Foreign Ministry’s Cultural Achievement Award. The artisans, Tyrolean harp maker Norbert Maier, goldsmith Peter Pfötscher, South Tyrolean woodcarver Filip Moroder Doss and Iraqi mosaic builder and architect Mohamad Al Janabi, wish to recreate the lyre and return it to the Iraqi people.

At KAICIID, the spokesperson of the reconstruction team, Florian Warum, introduced the local audience to the history of the instrument and to the challenges the team face in its reconstruction. These include, above all, the lack of resources necessary to build exactly according to original specifications, such as a kilogramme of fine gold to gild the bullhead.

The project is also a fascinating interreligious and intercultural collaboration, since the team is composed of Christian, Buddhist, Muslim and atheist craftspeople, who have united to restore an historical artefact, while highlighting Iraq’s role as the cradle of civilisations.

The next ‘Religionen im Dialog’ lecture will held on 14 November 2016, please visit click here to register.