‘Religions in Dialogue’: Lecture on Buddhism in Austria with Gerhard Weissgrab 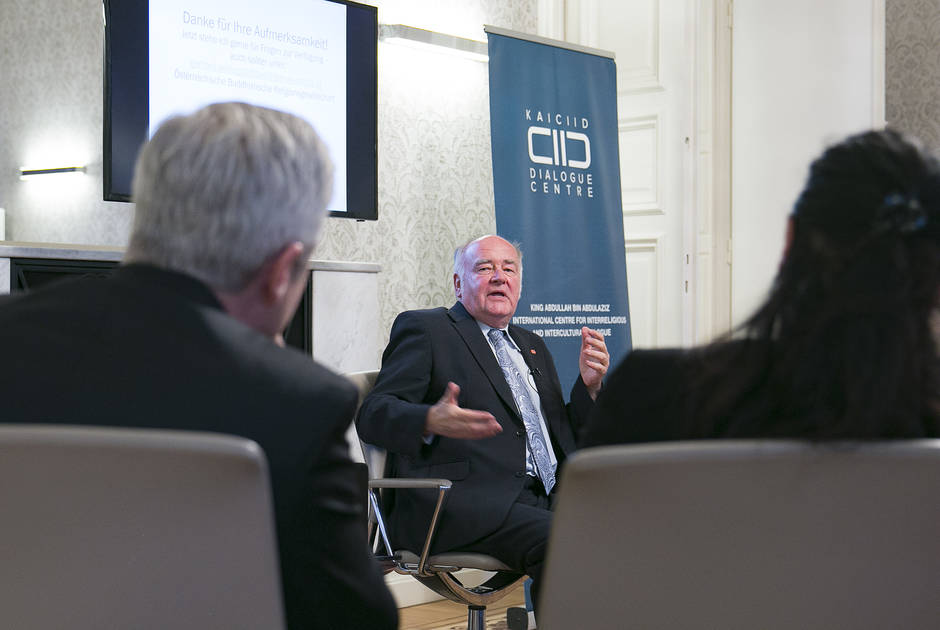 As part of the International Dialogue Centre’s series of open-house expert lectures 'Religionen im Dialog', Gerhard Weissgrab, President of the Austrian Buddhist Union (Österreichische Buddhistische Religionsgesellschaft), introduced the interested audience to the teachings of Buddha as well as to Buddhism in Austria in dialogue with other religions.

Gerhard Weissgrab discovered the teachings of Buddha on a journey to Sri Lanka in his late twenties. He was elected President of the Austrian Buddhist Union in 2006 and has since been the official representative of Buddhism in Austria which was officially recognized as a religious community in 1983.

During the lecture, Weissgrab gave a brief overview of the history of Buddhism and the different traditions within the religion that vary according to geographical location but co-exist without any hierarchy. He mentioned that in Europe all different traditions are present as a ‘Western Buddhism’-tradition does not yet exist. As president of the Austrian Buddhist Union (Österreichische Buddhistische Religionsgesellschaft), Weissgrab also elaborated on the work of the umbrella organisation of Buddhism in Austria that comprises an estimated 20,000 - 25,000 local worshippers and 40 Pagodas, or places of worship. The Union is responsible for supporting and informing all local Buddhists in their day-to-day life, including pastoral care for grief and inmates as well as youth outreach, and is also concerned with Buddhist religious education in public schools and in particular, with intra- and interreligious dialogue.

The lecture concluded with an engaging Q&A session, covering a range of topics including reincarnation and KAICIID’s work in Myanmar.

About ‘Religions in Dialogue’ lecture series

Last year, KAICIID established a German-language lectures-series, titled ‘Religions in Dialogue’ (Religionen im Dialog) on issues of relevance to interreligious and intercultural dialogue for the interested public based in Vienna. These lectures are followed by a round of discussion and a concluding reception to engage in dialogue.

If you would like to receive regular invitations, please register via dialog(at)kaiciid.org. Kindly note that these lectures are held in German only.