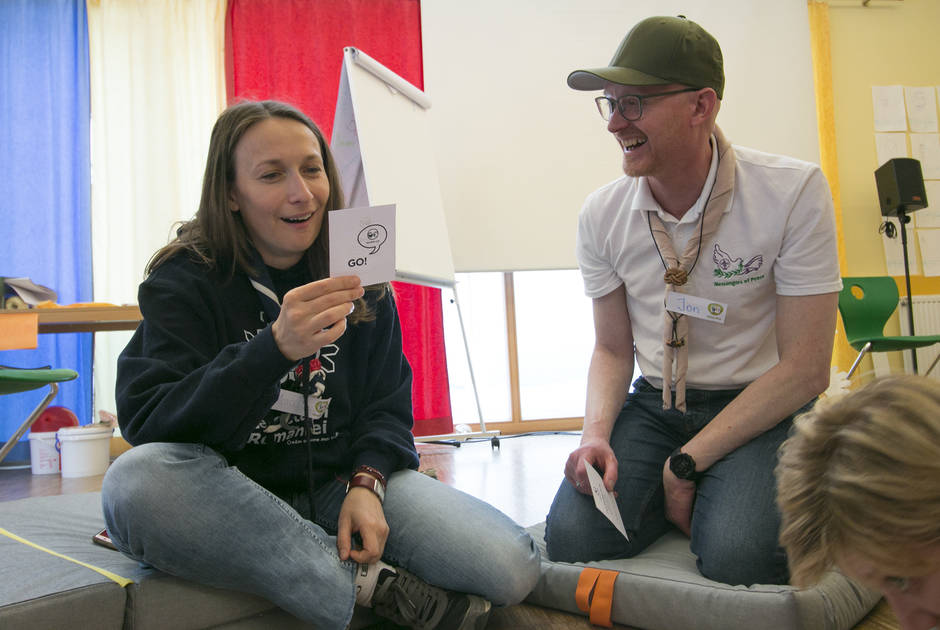 When COVID-19 began to impact the world in March with rising death tolls, job losses and country lockdowns, Sohini Jana and Jon Rasmussen realised young people from all faiths would require mental and emotional support.

Jana is an alumna of the KAICIID Fellows Programme and currently serves as the acting Chapter President for the India branch of the Euphrates Institute, a global network of peacebuilders. Rasmussen is from Denmark and has focused on youth engagement as a facilitator for KAICIID’s joint Dialogue for Peace Programme with the World Organization of the Scout Movement. Although the two programmes are run separately, Jana and Rasmussen met and forged their collaboration through KAICIID’s network of dialogue facilitators.

Tapping into their wide interreligious and youth networks, Jana and Rasmussen sought to create a safe, digital space for faith leaders and other facilitators to hold weekly dialogue sessions for youth from Asia and Africa.

“Young people find it difficult to communicate along intergenerational lines,” said Jana, who previously worked as a facilitator and trainer for teachers in northwest India before the pandemic. “They cannot communicate the kinds of confusion they are facing. They are the ones who are facing the future – a future which is uncertain.”

Together, Jana and Rasmussen created the Online Circle of Compassion, which provides a Zoom-based support group for youth to meet and interact with interreligious experts, peers and elders from other parts of the world.

“Our main focus was Asia and Africa due to the fact that these regions were worst hit by the COVID-19 crisis. Because of the recession setting in, job losses, uncertainties, and economic pressure, youth from these regions are struggling to figure out the path ahead,” Jana said.

Rasmussen adds that he and Jana wanted to provide a safe space for young people to work through fears and anxieties, encouraging them to come together rather than lash out at one another, which is a common response in high stress environments.

“Our unconscious feeling of being scared often leads to attacking ‘the Other’ to establish a level of defense and provide us with a feeling of security and peace. Biologically this is an absolutely normal behavior. But it doesn’t give us the wished-for result. This is where we can seek to bring in compassion and acceptance,” Rasmussen said.

The response to the first week’s online session convinced Jana and Rasmussen that the project was exactly what young people were looking for. “Around 70 people applied for a virtual seat. That means 70 people had the courage to reach out, wanting someone to virtually hold their hand and help them feel connected, understood and accepted,” Jana said.

So far, gatherings have brought together people from diverse faith backgrounds, including Buddhist, Christian and Muslim traditions, to reflect on how religion and compassion informs their interactions with others. 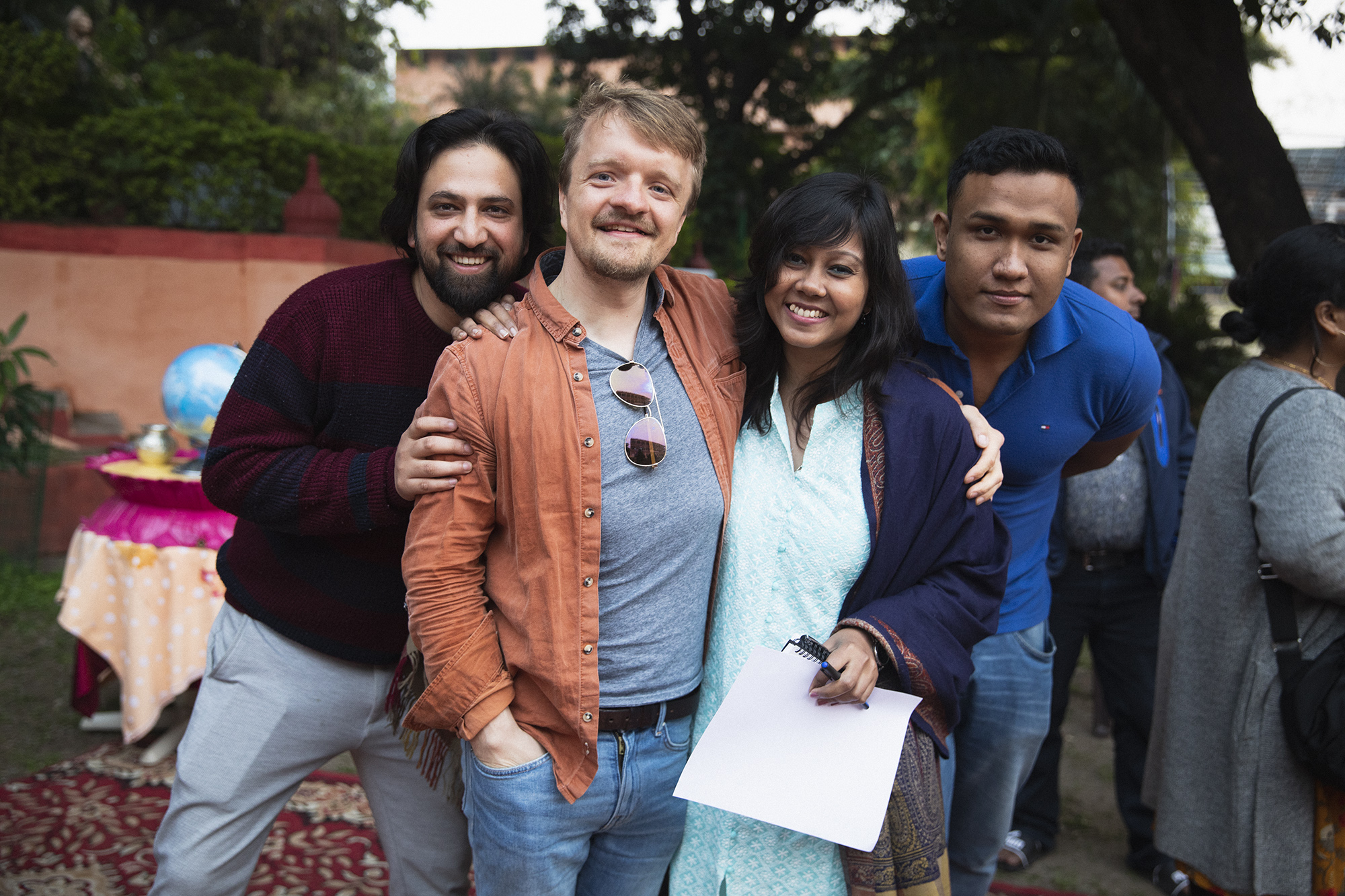 KAICIID Fellow Sohini Jana (second from the right) participating in a "Dialogue for Peace" Training that was held at Parmarth Niketan, Rishikesh

Young people have been involved in setting the agenda for the discussions, identifying topics such as dealing with issues in public health facilities which are not prepared to adequately address the COVID-19 crisis, the lack of youth participation in decision-making processes, taboos over discussing mental health issues and the rise in hopelessness in some communities.

Facilitators shared faith-based best practices for supporting mental health, helping participants to find hope during COVID-19 and understand the role of faith identities during intercommunity interactions around the virus.

“The trainings were particularly fruitful in helping people to understand how they could consciously practice interfaith engagement through dialogue,” Jana said.

In the months since its launch, the Online Circle of Compassion, has grown to include experts and participants from a number of countries, including India, Nepal, Tunisia, Germany and the United States. Among the attendees were young religious scholars from the University of Heidelberg and George Mason University, as well as students from a number of youth movements, such as the African Students Interfaith Network.

Jana and Rasmussen recruited volunteer interreligious experts primarily from KAICIID and its partner organizations. “Their role was to facilitate the compassion circles in breakout rooms that hosted multi-lingual participants. They facilitated the space and also translated as necessary,” Jana said.

Although Jana and Rasmussen designed breakout rooms to include people from shared languages whenever possible to make dialogues easier, they also ensured there was diversity in religious, ethnic and national identities.

“When we gather in this platform where compassion is key, there have been a lot of very interesting conversations along the lines of how different faiths support compassion in different ways,” Jana said.

For example, according to Jana, mental health is often considered a taboo in areas of Africa and Asia, and seeking professional help is uncommon. “The Online Circle of Compassion was crafted to fill that gap to a certain extent, as it sought to create a safe space where compassionate listening, story sharing and other dialogue tools were used to encourage the youth to share and unburden without fear.”

Participants were encouraged to open up at their own pace and to build trust within the group. “They could also just choose to listen in to the others’ stories and feel like part of a community through shared experiences and emotions. This ideally helps people not to feel so alone,” she added.

Jana says the most important recommendation for others who may want to launch similar initiatives is to safeguard the privacy of those attending the sessions. “Safety of those showing up is something we take very seriously. You won’t find pictures, recordings, names or anything else that can reveal the identity of any participant. To feel secure and safe, knowing that it won’t be held against you afterwards, is crucial.”

Do you want to learn more about how faith communities can support mental health during COVID-19? Join KAICIID's mental health webinar during World Interfaith Harmony Week.

In 2016, then UN Secretary-General Ban Ki-Moon met with faith leaders to discuss Myanmar’s peace and development process. In... END_OF_DOCUMENT_TOKEN_TO_BE_REPLACED

In July 2021, the Cowessess First Nation in Canada found 751 unmarked graves at the site of a former Roman Catholic... END_OF_DOCUMENT_TOKEN_TO_BE_REPLACED

In his own words, Rabbi Alex Goldberg has “reverse-engineered” his career. He pursued a rabbinic education only after... END_OF_DOCUMENT_TOKEN_TO_BE_REPLACED