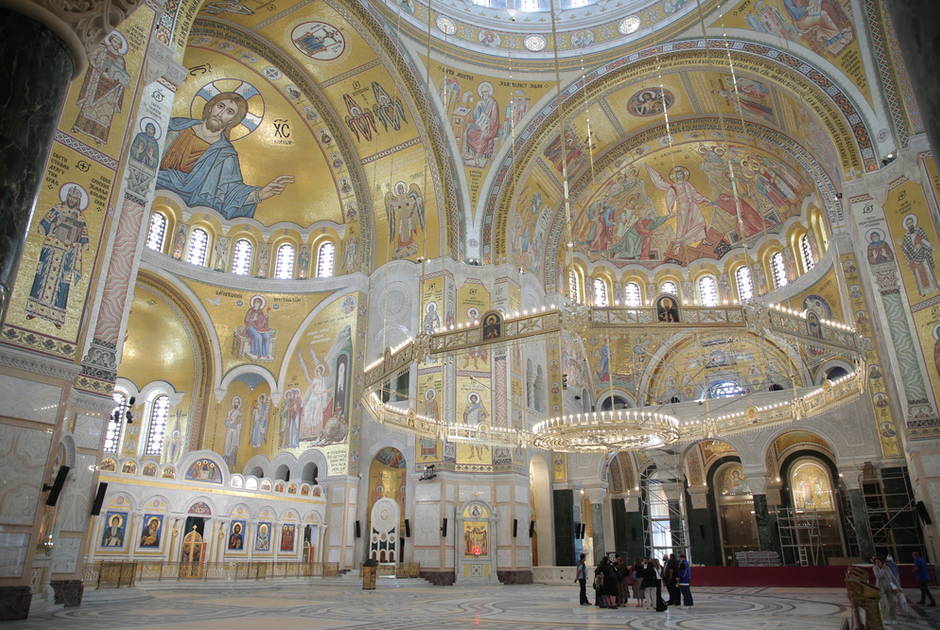 The KAICIID Fellows visit St. Sava Cathedral of Belgrade, Serbia. Visiting holy sites or "Houses of Worship" is a key part of the Fellows Programme because it provides not only a history lesson, but allows people of different faiths to see and appreciate the diversity of religious traditions. Photo: ArtVideo

During an interview in September 2021, Anas Alabbadi, Deputy Director for KAICIID’s Programmes Department, was distracted by a news notification that flashed across his screen: German police had just prevented an attack on a synagogue in Hagen, a city just east of Düsseldorf, Germany.

Having witnessed the devastation of the synagogue attack in the eastern German city of Halle in 2019, Alabbadi was struck again by how events like these underscored the emphasis KAICIID places on supporting and encouraging projects that promote the protection of religious sites.

“We believe, in accordance with the Universal Declaration of Human Rights, that people everywhere must be allowed to practice their faith in peace,” he said, “that religious sites and all places of worship and contemplation should be safe havens, not sites of terror or bloodshed.”

Across the globe, attacks on houses of worship and sacred sites are on the rise.

For example, the United States Conference of Catholic Bishops reported in July 2020 that there were 97 attacks on churches in the U.S. since May 2020 alone.

Elsewhere last April, the walls of a mosque in the French city of Rennes were defaced with Islamophobic graffiti. In August 2021, a Hindu temple was ransacked in the remote town of Bhong in the eastern Pakistani province of Punjab.

The list, as they say, could go on and on.

Noting that religious sites are of such significance that it makes them particularly endangered, Alabbadi said, “we want to make sure to protect religious sites so that they can continue to be facilitators of positive peace.”

Given the global scope of the issue, KAICIID is actively providing support to projects to protect places of worship from Africa to Asia, Europe to the Middle East.

When the United Nations Alliance of Civilizations (UNAOC) started the process of developing an action plan for reacting to the increase in attacks on religious sites after the bloodshed at mosques in Christchurch, New Zealand in 2019, KAICIID provided immediate support. KAICIID’s background research included supplying quotes from religious texts for the preamble, information on UNESCO’s work on the preservation of religious sites, and recommendations on the prevention of attacks under UNESCO’s purview. 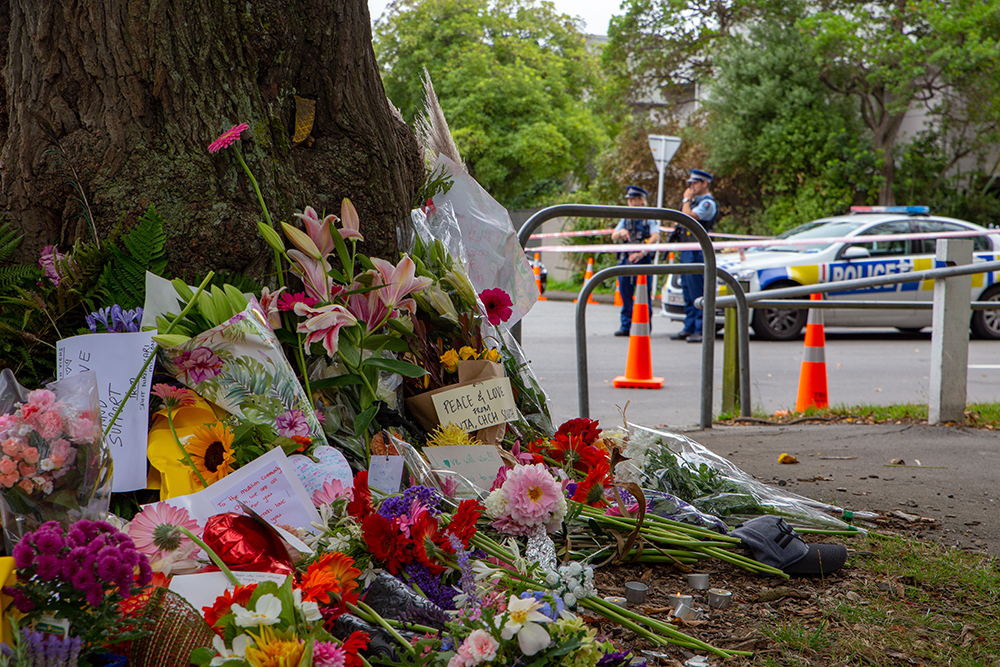 The result was the “Plan of Action to Safeguard Religious Sites.” According to its preamble, the plan “is a global call to rally around our most basic tenets of humanity and solidarity and to reaffirm the sanctity of all religious sites and the safety of all worshippers who visit houses of worship in a spirit of compassion and respect.”

For Alabbadi, the Plan of Action’s greatest strength lies in its systematic approach to the problem and focus on prevention and response.

“The emphasis is on education, countering hate speech – including on social media – and being prepared to provide care and support when an attack happens,” Alabbadi said.

“Translating such recommendations requires better collaboration between policymakers and religious actors,” he said, “religious actors have a lot to contribute in developing and implementing policies related to the protection of sacred sites.”

To that end, over the last two years KAICIID supported projects in the Arab region bringing together peace education and the protection of sacred sites. These projects included the development of a mobile app in Algeria and youth trainings in Tunisia. 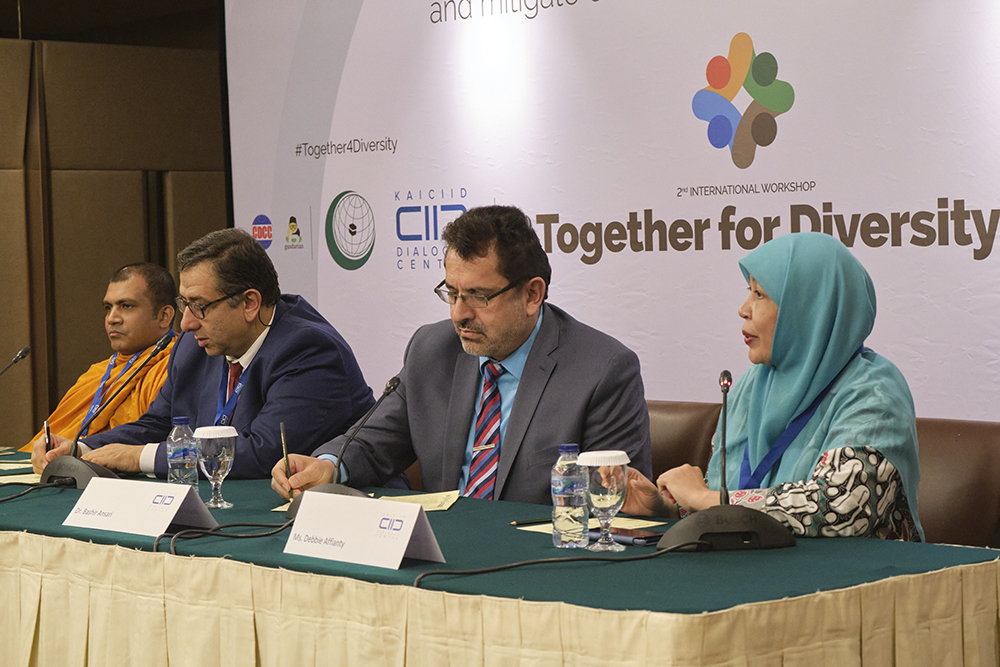 In Indonesia, KAICIID organised the 2019 “Jakarta Conference” with the Organisation for Islamic Cooperation (OIC), bringing together religious leaders and policymakers from across Southeast Asia to discuss challenges and opportunities for protecting holy sites.

The result was the “Jakarta Statement: Together for Diversity — Dialogue in Action,” which included a collective pledge to recognise, preserve, and protect “sites of worship and spiritual heritage and allowing worshippers to use them in peace and harmony.”

Reaffirming the Sanctity of Sacred Sites in Africa

In Africa, KAICIID partnered with the African Union to support 12 projects organised by members of its Interfaith Dialogue Forum (AU-IFDF) specifically focused on the protection of sacred sites.

Agustin Nunez, KAICIID’s Senior Programme Manager for the Africa Region, said the AU’s main theme for 2021 is the promotion of cultural heritage, including the protection of sacred sites.

The partnership, he said, is meant to bring both religious and community actors to the policymaking table “to raise awareness and advocate for the development of regional mechanisms in Africa” to do so.

Among the projects is one in Djibouti where KAICIID-supported religious leaders, elders, youth, CSOs, and NGOs are working together to build a platform to collaborate in preserving and restoring local religious assets. Chief among their priorities is the preservation of holy sites in the eastern African nation.

Not only do such projects contribute concretely to the protection of religious sites, but “promote a peaceful, secure Africa whose development is people-driven” said Nunez, “especially by its women and youth.”

Elsewhere, in the city of Jos, Nigeria, Rev. Zaka Ahuche Peter said his KAICIID Fellows training equipped him to do the same in his country.

That Fellows training includes, “educational modules on the symbolic importance of sacred sites and build Fellows’ capacity to communicate this and diffuse situations through education and creating space for dialogue,” said Alabbadi.

Peter said his relationship with another KAICIID Fellow of a different faith, Fatima Madaki, reveals the “human factor” beyond distrust, helping foster resilience and a mutual respect for the “Other.” He said these kinds of relationships are vital as “attacks on religious sites in Nigeria seem not to abate.

“The fact still remains that ignorance, fanaticism and lack of the fear of God are responsible for destruction of holy sites,” he said, “but in collaboration with religious leaders and training from KAICIID, we are able to send the correct teachings out.”

Farther to the south, in the Nigerian state of Kaduna, Mugu Zakka Bako received a KAICIID 2021-2022 micro grant to organise an interreligious dialogue between local government, civil society organisations, and community leaders to strengthen coherent narratives to respond to violent extremism.

An active and trained peacebuilder whose passion for non-violence as a solution to conflict was moulded out of personal violence against his family members, Bako said “we have been bewitched by a lot of conflicts over natural resources and for ethno-religious, political, and economic reasons.

The conflicts have included numerous attacks on religious sites. “This has happened recently with the burning of churches and mosques in Plateau and some parts of Kaduna state,” he said, “the incessant attacks create insecurity and insecurity is one of Nigeria’s biggest challenges.”

The reactions, said Bako, have been overwhelming. “The outcome has been to foster resilience in the communities where I have worked,” he said, “it has helped religious leaders develop coping capacity and become aware of the need for them to protect their religious sites.

“Today, they are working towards interreligious groupings where Christians protect worship sites of the Muslims, while the Muslims do the same for Christians,” he said.

These kinds of programmes, Alabbadi said, are particularly impactful. With an eye toward expanding programmes like them in the Arab region and Europe in years to come, Alabbadi said, “when imams, priests, and other religious leaders visit each other in hard times and in good times, it signals to the community that it’s okay for them to do the same.”

“This level of relationship is what we call positive peace, to visit and to know what’s behind those walls,” he said.

“It is easy to believe negative stories about what is happening behind these walls when you stand outside them,” said Alabbadi, “but once you step inside and see another’s sacred space with your own eyes, it’s a profound, life-changing, life-affirming experience.”

For over 15 years, Albert Mbaya has worked as a reporter in one of the most dangerous contexts on earth for journalists,... END_OF_DOCUMENT_TOKEN_TO_BE_REPLACED

As a child growing up in Nigeria, Fatima Madaki hoped to study medicine, believing that to be the best way of saving lives... END_OF_DOCUMENT_TOKEN_TO_BE_REPLACED

Trained in the art of interreligious dialogue, these faith leaders are making Nigeria a more peaceful place. For those... END_OF_DOCUMENT_TOKEN_TO_BE_REPLACED